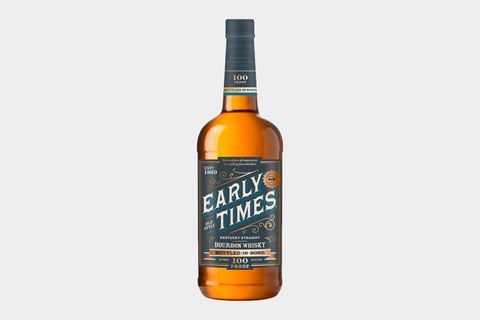 TL;DR: A bottom-shelf gem only you and the liquor store owner know about.

For all the moaning whiskey fans do about price inflation in the bourbon world, few true value bourbons are celebrated with the usual #crotchshot fanfare — such treatment is reserved for high-profile limited edition pickups (especially when found near their retail prices) like Buffalo Trace's Antique Collection or 18-year-Old Elijah Craig. For most of those that spend leisure time hunting bottles of whiskey, they're closer to show pieces than something to be opened and poured — sort of like sneakerheads that don't wear their sneakers. Those looking to open and drink whiskey regularly (and responsibly) are left out in the cold in most internet whiskey discussions. Early Times' Bottled-in-Bond is an exception.

Per government statute, all Bottled-in-Bond whiskey is at least 4 years old, bottled at 100 proof and made at one distillery in one distilling season. Whiskey bargain hunter translation: $25 a liter (which translates to roughly $18.75 for a standard 750mL bottle) for Early Times Bottled-in-Bond is a wicked deal.

Related Stories
This Isn't Your Weird Uncle's Bottle of Jack
The Best Everyday Bourbons You Can Buy
How to Talk Bourbon: 11 Slang Terms To Know

Its price, proof and age guarantee put it in league with the Evan Williams Bottled-in-Bonds, Four Roses Yellow Labels, Wild Turkey 101s of the world, all of which represent the best bang for one's bourbon buck in the whiskey world.

It goes down easy, too. The whiskey sports a 79% corn, 11% rye and 10% malted barley mashbill and serves up less of a bite than the likes of Wild Turkey or Old Grand-Dad expressions. To me, it tastes like Basil Hayden's with a stronger boozey backbone.

Before this summer, all Early Times products were produced by Brown-Forman, the company that owns the likes of Jack Daniel's, Old Forester and Woodford Reserve. Then Brown-Forman sold the 160-year-old brand to Sazerac, the company behind Buffalo Trace and its many hard-to-find whiskeys. My advice: by three liters before the whiskey world wakes up and realizes what they're missing out on.