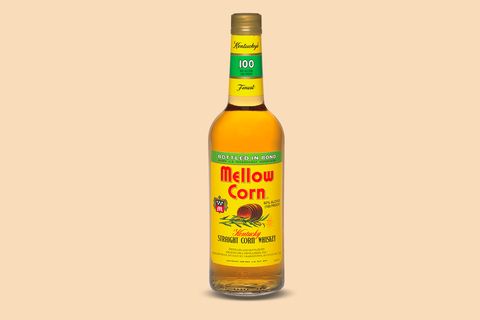 Welcome to the Cult of Mellow Corn, we have memes.

Bearing the same chintzy label it did at its release in 1945, Mellow Corn is strategically buried at the bottom of the venerable Heaven Hill Distillery's brand page. It is not rye whiskey, bourbon whiskey, wheat whiskey or moonshine – it's straight corn whiskey, thanks to a staggering 90 percent corn mashbill (anything about 80 percent is designated corn whiskey).

According to the Alcohol and Tobacco Tax & Trade Bureau (TTB), corn whiskey can be matured in used oak barrels, too, where bourbon must age in new charred oak barrels. Heaven Hill takes advantage of this by dumping the new make corn spirit into its own used barrels and let it mature for at least four years and bottle the stuff at 100 proof (per the Bottled-in-Bond requirement). Then, somewhat mysteriously, it's priced anywhere from $10 to $15. A minimum 4-year-old, 100 proof whiskey from one of America's best whiskey makers for less than lunch at Chipotle.

Thanks to its goofy label and the color of the whiskey inside, it enjoys some popularity in the deep-cut whiskey nerd crowd (plus, its low-price, high-proof has made it a bartender favorite). Look past the label, the color and the name and you'll find an undervalued whiskey that's cheap enough to make a punch out of, sturdy enough for a stiff drink and delicate enough to drink on the rocks, where you'll be assaulted by dried fruit and vanilla.

This content is created and maintained by a third party, and imported onto this page to help users provide their email addresses. You may be able to find more information about this and similar content at piano.io
Advertisement - Continue Reading Below
More From Whiskey
Famed Whiskey Reviewer Accused of Sexism
Looking for the Best Value Bourbon? Just Get This
Advertisement - Continue Reading Below
The 18 Best Bourbon Whiskeys You Can Buy in 2020
5 Instagram Accounts to Get You Into Bourbon
Blanton's Whiskey Fans Are Having a Very Good Year
This Bourbon Is Cherry Pie in Whiskey Form
Meet the Most Expensive Bottle of Japanese Whisky
The 25 Best Scotch Whiskies You Can Buy in 2020
The 12 Best New Bourbons and Whiskeys of 2020
The 5 Bottles That Made Me Love Whiskey