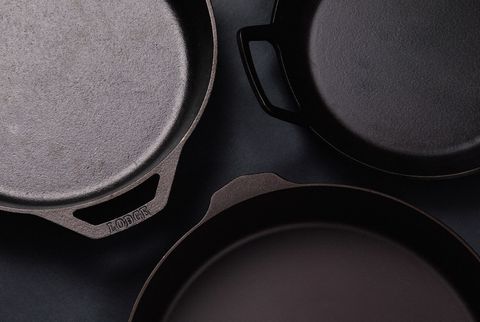 In the world of cast iron, folklore collides with fact. That skillet that’s been passed down from your great grandmother may seem unbreakable, but iron is far more brittle than its steel, aluminum or copper counterparts; and all the blogs that say any trace amount of soap is the death of cast iron are totally wrong. Point is: when dealing with a new cast-iron skillet, it’s easy to be led astray. Here are four traps beginners routinely fall into, and how you can avoid them.

Don’t listen to your grandpa: when it comes to heat, cast iron is an excellent insulator but a terrible conductor. That means it stays hot but takes a long time to get there.

Preheat the skillet over a burner for five to ten minutes on medium-low, then adjust the burner to the appropriate heat level when you’re one minute out. Doing so means two things: the surface temperature of the skillet will be high enough to immediately evaporate liquid from food and begin searing, and the pan won’t suffer dramatic drops in surface temperature when you put cold food in it.

A proper pre-heat also helps to alleviate hot spots, though these can only be avoided to an extent when addressed on the stovetop. The best way to avoid excessing hotspots is preheating in the oven or on an induction burner.

Cooking Literally Everything on It

A cursory Google of “cast iron skillet egg test” yields dozens of videos by boastful cast iron enthusiasts proud of their pan’s ability to cook an egg without tearing it to pieces. This should be enough evidence that some foods are better cooked by other means. For eggs, fish and other delicate, clingy foods, you’re better off with a decent non-stick pan. Made In makes a great premium option, while companies like T-Fal and Oxo make cheaper options that work just fine.

If you’re stewing tomatoes or making a wine sauce, it’s wise to err on the side of caution and go stainless steel — high-acid foods and liquids eat away at seasoning and leech iron into your meal (this is especially detrimental to new cast iron, as the seasoning will be thin out of the box).

Being Afraid of Water (and Soap!)

Can you use water, and even a little soap, to clean your cast-iron skillet? Yes, some bits won’t come off with just elbow grease. But the I-don’t-want-to-do-dishes reprieve of “let it soak overnight” is destructive to the skillet. Exposure to water for that long will eat away at all your hard-earned seasoning and there will be sad splotches of orange-red rust. After cleaning, it’s good practice to put the skillet back on the stove and let it heat dry over a burner until all moisture is evaporated (you can take it a step further and add a layer of seasoning on your stovetop, too).

Seasoning is not black magic. It is not hard to season a skillet. It does not matter if your skillet is nice to look at. Ask any cast-iron skillet manufacturer how to ensure a cast-iron skillet is well-seasoned and the answer will always be the same: cook in the damn thing. Fats used and released by ingredients during cooking — vegetables, steaks and everything in between — can polymerize and protect a skillet as well as any oil. Don’t overthink it.