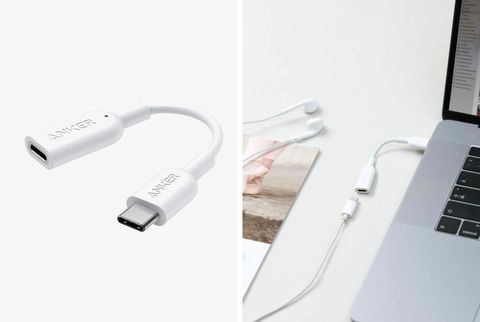 When Apple removed the headphone jack from the iPhone 7 back in 2016, the world managed to keep turning. Between dongles and AirPods and comes-with-your-iPhone Lightning EarPods, there were a handful of different options to move forward. But when Apple introduced its shiny new 2017 MacBook Pro with three USB Type-C ports, a good old fashioned headphone jack, and nothing else it led to a weird little issue: Apple’s standard iPhone headphones with their Lightning plug had no way to plug into Apple’s flagship computer, which lacks one. For years, it was a problem that no dongle could solve.

Now, at last, that dongle exists though it’s made by Anker and not Apple. With a female Lightning port on one side, and a male USB-C connector on the other, the adapter will finally let you plug your iPhone 7-or-later EarPods into your MacBook (for a price of $30). It’s a bit steep for such a minor convenience, but more worth it if you happen to own one of the few pairs of pricier Lightning headphones like Beats urBeats3, which until now have been relegated to iPhone only.

Since this adapter plugs into a USB port, Lightning headphones are still a bit hamstrung; there’s still no way to plug a pair into a traditional 3.5mm headphone jack. But at least now, after several years and with the help of a third-party adapter, two of Apple’s most common gadgets are finally compatible. Steve Jobs would be proud.

This content is created and maintained by a third party, and imported onto this page to help users provide their email addresses. You may be able to find more information about this and similar content at piano.io
Advertisement - Continue Reading Below
More From News & Product Releases
Some of the Best Recent Watch Releases
Famed Whiskey Reviewer Accused of Sexism
Advertisement - Continue Reading Below
These New Nikes Make Every Runner Feel Elite
Keen Releases Jerry Garcia Masks, Sandals and Bags
Did Ford Just Create the Best Cheap Pickup Truck?
Try to Win the Coolest Vintage SUV, Help Sick Kids
The Best Standing Desks for the Home or Office
Support Criminal Justice Reform and Win a Mercedes
Innovative Outdoor Tech Makes This Bong Awesome
Yup, This Is the New BMW M3