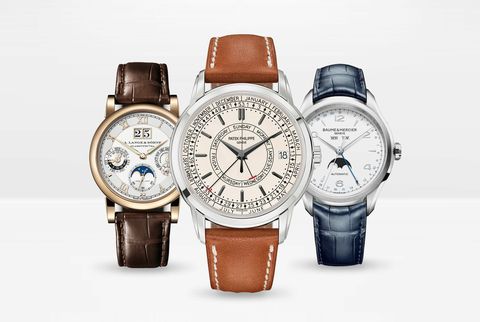 If you glance at your watch on July 1st and find that its calendar still shows the 31st, you can thank the Romans. In the earliest days of their fallen empire, their calendar followed a fairly simple lunar cycle with an arbitrarily set 10 months. When Roman astronomers proposed a more accurate solar calendar with 12 months, the two new ones were named to honor the Caesar dynasty, Augustus and Julius, and immediately rendered September (meaning “seventh”) through December (“tenth”) misnamed. Naturally, these new Caesarian months had to have the most days (31), and so did October (Caesar Octavius).

So while the calendar approximated the sun’s travel across the sky, these imperially decreed longer months would forever become the bane of future watchmakers since a simple watch with a date function is not smart enough to distinguish months with 30 days from those with 31. And that’s not even to mention the problem of February.

The concept of the leap year was also the result of a decree, though religious instead of political. Pope Gregory wanted to ensure that Easter fell as close as possible to the spring equinox every year so he declared that every fourth February will get an extra day to keep the calendar synchronized to the seasons. This so-called “Gregorian” calendar compensates for the fact that our 365-day year is six hours shorter than a true solar year and so “resets” it every four years. As if the Romans’ narcissistic calendar wasn’t enough to have to deal with, the Gregorian one added even more complexity for future horologists.

The most elemental form of calendar complication is found in a watch with a date function, which dutifully marches off 31 24-hour cycles before starting all over again thanks to its system of gears that are toothed to coincide with most months. But with the addition of a set of gears and discs driven off the going train of the movement, the possibilities grow, and in the 1800s, complete, annual and perpetual calendar watches became popular not only for their usefulness but also for their complexity. These watches add the day of the week and the month and, in their most complicated form, the leap year cycle, allowing the watch to correct itself for not only short months but also for those years that Pope Gregory wanted to be a day longer.

Calendar watches can be divided up into three categories of increasing complexity. A complete calendar, sometimes called a “full calendar”, is a watch that displays the day of the week, the date, the month of the year and, of course, the time. Often these watches also show the phase of the moon. Consider the complete calendar an entry point or a gateway watch to high complications. They are classically elegant and useful but more affordable than their more elevated cousins since they have less going on under the hood. With a complete calendar watch, you must still advance the date on those months that have less than 31 days, usually with a small button on the side of the case.

As if the Romans’ narcissistic calendar wasn’t enough to have to deal with, the Gregorian one added even more complexity for future horologists.

A step up from the complete calendar brings much greater functionality and an accordingly higher price. An annual calendar watch has the same display as a complete calendar but is “smarter” in that it compensates for the short months of the year, besides pesky February, by advancing accordingly. An annual calendar has got you covered for 11 of the 12 months of the year and three out of every four years; as long as you keep it wound, you won’t have to touch it to correct the date March through January.

The perpetual calendar is, as its name suggests, self-sufficient in its date calculations, even in leap years, thanks to a “mechanical memory” of 1,461 days. Set it and forget it. Just keep it wound or there’s a considerable amount of setup you’ll have to do to get it back in synch. Perpetual calendars maintain the classic layout of the other calendar watches, with day, date, month, time and often moonphase displays, but usually add an indication of the current position in the four-year leap year cycle.

There is one calendar anomaly that will foil even the mighty perpetual calendar, and again the Romans are to blame. On March 1st of the year 2100, it will not be a leap year, unlike all the others before it. This is due to a quirk of Pope Gregory’s ancient calendar, which says that three century years out of four are not to be leap years. If you’re lucky enough to own a perpetual calendar, leave your grandson a note.

Here are some calendar watch choices to keep you on schedule and channel your inner Roman. Not all pair well with a toga.

The Laureato family of Girard-Perregaux watches fits into a small niche of luxury steel sport watches that includes the Audemars Piguet Royal Oak and the Patek Philippe Nautilus. Its octagonal bezel helps it fit in even more, but the sporty design has become a palette for high horology complications as well. With its 42mm steel case, Clou de Paris-textured dial, unusual layout for the calendar information, and an in-house movement from one of the best names in the business, this watch combines a sporty vibe with some seriously refined and complicated watchmaking.
Price: ~34,206

Baume & Mercier is a strong player in the game of accessible high watchmaking. The Clifton has the elegant lines and functionality of the heavy-hitters in this category but comes in at about half the price. This is thanks to an outsourced movement that adds some heft to the case, but it’s still a watch your son won’t turn up his nose at when you pass it down.
Price: $3,750

IWC debuted the Portugieser Annual Calendar in 2015 with an all-new movement and contemporary good looks. Equally impressive today, the movement, developed in-house in Schaffhausen, has a full seven-day power reserve and shows the month, date and day in the “American” style (month first) in deference to IWC’s American founder, F.A. Jones.
Price: $20,900

JLC is often called “the watchmaker’s watch company” due to its huge catalog of in-house calibers, many of which have been used by other, more prestigious brands. Nobody does complications like Jaeger, and its Master Ultra-Thin Perpetual Calendar is no exception, with a beautiful dial execution, and all while keeping overall thickness to less than 11mm.
Price: $55,000

The German masters at Lange are known for many things, but the company’s most recognizable trademark is the outsized date, modeled after the clock in the Dresden opera house. Instead of showing the day in an aperture on the dial as many traditional calendar watches do, it is pointed to on a sub-dial, as is the other information, giving the watch a clean, Teutonic aesthetic.
Price: $94,915

Georg Jensen is better known for silversmithing, but the brand has recently made a concerted effort to produce timepieces befitting its Danish design heritage. The Koppel Annual Calendar veers from the classic norms of this watch category with a clean enamel dial, a small seconds sub-dial and a minimalist approach to displaying the calendar, using an offset arc-shaped aperture for the month and the date front and center.
Price: $16,495

No listing of calendar watches or grand complications is complete without a Patek, and the 5212A was something a bit unexpected for the conservative brand when it was released at Baselworld 2019 in steel. The sheer weight of Patek’s legacy alone is enough to make this watch notable, and its clean arrangement of all relevant calendar details (including the week number) is executed, once again, with deft refinement. Then you turn it over and gaze on the exquisitely decorated movement, and you can see why Patek sits at the top of the heap.
Price: $29,500

Breguet’s founder, Abraham-Louis Breguet’s legacy continued long after his death, and in fact the company built the first perpetual calendar wristwatch in 1927. The Classique 5327 carries forward many of the brand’s longstanding aesthetic cues, with blued hands in a style named for Breguet himself, a guilloche-patterned dial and distinctive subdial layout for month, day, date, moonphase and leap year. It is also thoroughly modern, with a silicon hairspring immune to the effects of magnetism. Old Abe would have been proud.
Price: ~$55,458

Most calendar watches are dainty affairs, well suited for wear under a starched monogrammed shirt cuff — but not this one. Try a flight suit. The undisputed brute of the category is the bronze-cased Top Gun Spitfire from IWC, which is one grand complication you can wear for all the 1,461 days of the leap year cycle with little fear of damaging it. It also shows a full digital year display (an IWC invention) and the moonphases in both the northern and southern hemispheres.
Price: $28,200

Related article
The Things Your Watch Can Do Besides Tell the Time
This content is created and maintained by a third party, and imported onto this page to help users provide their email addresses. You may be able to find more information about this and similar content at piano.io
Advertisement - Continue Reading Below
More From Watches
5 Modern Hamilton Watches to Collect
Check Out This Affordable Military Watch Homage
Advertisement - Continue Reading Below
Garmin Updated Its Premium Smartwatch
Seiko Prospex Alpinist Watch Review
The 12 Best Dive Watches at Every Budget
Yema's New Watches Present Compelling Value
A Great Way to Store Your Watches, Knives and EDC
This New Dive Watch Features a '70s-Inspired Color
A Short Buying Guide to the New Apple Watch Bands
Why Is Rolex's GMT-Master The Best Travel Watch?