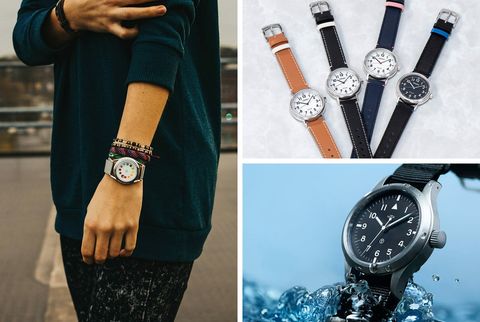 There’s been much written about the “sweet spot” for watch sizes. Ten years ago, the conventional wisdom skewed between 40mm and 42mm. Today, things have widened a bit, to include watches down to around 38mm. Why the drop in millimeters?

I’d argue it’s largely about comfort. You see, the way a watch sits on the wrist is hugely affected by its diameter, which is mostly what we mean when we refer to a watch’s size. But there’s more going on here: the way a watch wears has just as much to do with its thickness, also measured in millimeters; and its lug-to-lug length, literally measuring from the tip of one set of lug to the other, has much to do with whether you want to take it off at the end of the day or sleep in it. And, generally, a watch with a smaller diameter width will also be slimmer, and have a shorter lug-to-lug length.

There are exceptions, of course. But they don’t sway me, personally. I have what you’d call average-sized wrists, and I wear a 35.5mm vintage Zodiac Sea Wolf every day. It’s great. The crown doesn’t dig into my hand, and, when I camp, I wear it to sleep, no problem. Here’s the other side of things, the one I think a lot of guys think about but don’t mention, when they talk about why they don’t wear small watches: No one has ever seen this watch, taken it into their hands, and said, “But it’s so small!” Men wore them this small throughout the middle of the 20th century, and I’m not buying that we’ve “moved on” from that size. Fashion is cyclical, after all.

The truth, I believe, is that any size between 35mm and 38mm offers plenty of size of legibility and simply looks good, even on a larger wrist. But don’t take my word for it. Try on any of these watches, all under 38mm in diameter, and you’ll see that a small watch might just be the best watch.

The oft-overlooked tough watch brand makes many durable watches for outdoorsmen. The new A1R Field Comfort might be slightly thicker than many other watches on this list, but its polycarbonate 36mm case is incredibly light at just 1.3 ounces.
Case Size: 36mm
Thickness: 12.2mm
Movement: Japanese quartz
Price: $55

The Seiko 5 is as ubiquitous as it gets: it comes in all sizes, shapes, and colors. This means you can find many of its iterations in case sizes below — and sometimes well below — 38mm. Some are meant for sport, some for diving, and some are more formal, but all deliver incredible value, such as this SNZG09K1 field watch.
Case Size: 36mm (varies)
Thickness: 12mm (varies)
Movement: Seiko automatic 7S36 (varies)
Price: $117 (varies)

Timex’s Marlin is a hell of a great watch to have around: it’s mid-century on a budget, available in a number of great colors (the silver dial is our favorite, especially on mesh), and, particularly for those with smaller wrists, it’s a great dressy watch to match with all sorts of looks.
Case Size: 34mm
Thickness: 10mm
Movement: hand-wound mechanical
Price: $199

Small can be expressive, too. Such is the case with this alternative time-teller from Mr Jones, which eschews hands for a simple color-and-circle system.
Case Size: 37mm
Thickness: 9mm
Movement: Ronda quartz 513
Price: $210

Seiko’s latest miniature wonder is a reprise of a line of watches made for schoolchildren in the 1970s. Unlike the Seiko 5, they’ve got a solar-charged quartz batteries. At 31.5mm, they’re just big enough to work on adult wrist, too.
Case Size: 31.5mm
Thickness: 7.7mm
Movement: Seiko V131 solar quartz
Price: $235

Here’s another military watch with some serious chops: the Cabot Watch Company has made mechanical and quartz watches for the British military since the 197-s. The G10 is a modern execution of a model from the 1980s, with a solid quartz movement and a slight cushion-shaped case.
Case size: 38mm (with crown; 36mm without)
Thickness: 10mm
Movement: ETA quartz 955.102
Price: ~$243

Philadelphia-based MKII is a maker of much-sought-after homage watches. This one is inspired by the JLC and IWC MK 11, made for the British military between the 1940s and 1980s. This is actually MKII’s second version of the watch—Bill Yao shrank it from 40mm to just under 38mm to make it more wearable. And wait time (because you should be wondering) is just three weeks.
Case Size: 37.8mm (not including crown)
Thickness: 12.75mm
Movement: Japanese-made SII NE15 automatic
Price: $595

The Runwell is synonymous with Shinola. But the oft-forgotten Guardian, with its rounded square case, has a more interesting look, and comes in a 36mm size.
Case Size: 36 x 36mm
Thickness: 10.8mm
Movement: Argonite 715 quartz
Price: $675

This Scottish company turned a lot of heads in 2018 with their enamel-dialed Model 1. The Model 2 is made for small-watch fans out there: It’s got the same beautiful dial colors, with a 36mm field-watch-style case.
Case Size: 36mm
Thickness: 11mm
Movement: Sellita SW-210-1
Price: ~$1,160

The original Oris Divers Sixty-Five is a darling of the watch nerd community: the look, the price, the brand, are all near perfect. In 2018 they released a 36mm size, which is candy for smaller-wristed dive watch fans. They’ve got it in eight different configurations, all just as ready to be worn into the ocean — and even more suited under the jacket cuff — as the 40mm version.
Case Size: 36mm
Thickness: 13mm
Movement: Oris 733 automatic (Sellita 200-1)
Price: $1,900+

The Tudor Black Bay dive watch, while sharp, clocks in at a chunky 41mm and almost 15mm of thickness (though the Tudor Black Bay 58, which is basically unobtanium, is smaller). Which is why Tudor (and Rolex) fans rejoiced in 2016, when Tudor released the Black Bay 36mm, which looks a lot like a modernized Rolex Explorer. How cool is it? Lady Gaga reps the damn thing.
Case Size: 36mm
Thickness: 10.5mm
Movement: Tudor 2824 automatic
Price: $2,900

You can point out that it’s pretty chunky (can one call a watch “phat”?) at 13.3mm thick. But this is about as small as Grand Seiko gets, and you can imagine all the mechanical magic they pack into its 37mm case.
Thickness: 13.3mm
Movement: Grand Seiko 9S65 automatic
Price: $3,800

Folks in the know view vintage Oyster Precision models from the 1950s — and their 34mm diameter — as the ultimate value play. So why would you ignore the modern equivalent? That’s not the 36mm version of the Oyster Perpetual — it’s the 34mm.
Case Size: 34mm
Thickness: 11.7mm
Movement: Rolex 3130 automatic
Price: $5,050

As Jason Heaton noted back in 2016, the launch of the Pilot’s Automatic 36mm was the most genuine pilot’s watch from IWC in a while — for the first time, the dimensions of the watch were not blown up to a modern-sized 40mm. Instead, they stayed closer to the original. The result is a watch that your grandpa really would’ve worn.
Case Size: 36mm
Thickness: 10.7mm
Movement: IWC 35111 automatic
Price: $5,150

Yes, it was invented because wealthy British colonialists needed a way to protect their watches while playing polo…but we say it’ll survive because it comes in a small size that’s just right. That, and because it’s damn cool.
Case Size: 35.7 x 21mm (square)
Thickness: 7.4mm
Movement: JLC calibre 657
Price: $5,150

The watch so thin they had to invent a new material to make its case. And, at just 37mm, it wears real small.
Case Size: 37mm
Thickness: 1mm
Movement: Citizen Eco-Drive One
Price: ~$6,400

Related article
These Are the Best Big Mens Watches

This content is created and maintained by a third party, and imported onto this page to help users provide their email addresses. You may be able to find more information about this and similar content at piano.io
Advertisement - Continue Reading Below
More From Buying Guides
The Best Everyday Face Masks Available Now
23 Tools That Pro Chefs Can’t Cook Without
Advertisement - Continue Reading Below
What to Buy from the Oxo of Millennial Home Goods
The Best Standing Desks for the Home or Office
6 CBD Products Professional Trainers Swear By
The 8 Best Engineer Boots for Men
The 12 Best Jeans for Men
The 12 Best Dive Watches at Every Budget
The Best Instant Coffee for Camping
The 6 Best Mechanical Keyboards to Use at Work