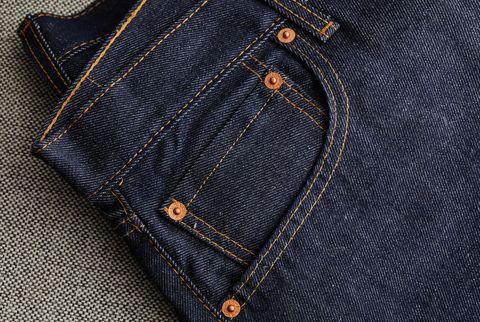 Welcome to Further Details, a recurring column where we investigate what purpose an oft-overlooked product element actually serves. This week: that little pocket in your jeans.

Jeans are a long-established part of the American identity, and a worldwide fashion staple. They’re so ubiquitous, however, that you probably never considered every little design element in a given pair — like that little side pocket within the front pocket. At some point, most people have perhaps probed it with an idle index finger or even felt mild annoyance as they struggled to fish out a coin. You yourself might have even wondered what the hell it’s there for.

Though this pocket’s purpose may be obscure, everyone knows that a pair of jeans just wouldn’t look right without it. Along with other features like visible, reinforced stitching and rivets, it kind of defines modern bluejeans. For “denim-heads,” the standard, iconic design is termed the “5-pocket”: two front pockets, two back ones…and that weird little one sometimes called a “coin pocket.” That name probably describes its most common current use, but that’s not what it was invented for.

Jeans as they’re recognized today were originally work pants for American cowboys, miners, factory workers and others way back in the latter decades of the 1800s. The earliest jeans only had four pockets, but the curious fifth one is even present on the oldest pair of jeans in the Levi’s archive, dating to 1879. Also called a “fob pocket,” it offered convenience and protection for what could be considered the smartphone of its time: the pocket watch.

According to the Levi Strauss website, “this extra pouch has served many functions, evident in its many titles: frontier pocket, condom pocket, coin pocket, match pocket and ticket pocket, to name a few.” But it was originally called a “watch pocket,” and when attached to a fob (the other end clipped to, say, a belt loop or vest’s button hole), the pocket watch would be easy to retrieve — unlike coins, for instance.

If you’re determined to make use of it, there are surely a wide range of small things otherwise easily lost that would be well-kept and readily accessible in this pocket: a lighter, keys, AirPods…heck, you could even carry a pocket watch.

Embedded in many button-up shirts today, the locker loop has its roots set in the Ivy League back in the mid-1900s. Read the Story

This content is created and maintained by a third party, and imported onto this page to help users provide their email addresses. You may be able to find more information about this and similar content at piano.io
Advertisement - Continue Reading Below
More From Further Details
Why Your Watch's Seconds Hand Is Important
Why Don't Car Rear Windows Go Down All the Way?
Advertisement - Continue Reading Below
The Truth About the Apple Keyboard's Weird Symbol
What the Hell Is Selvedge and Why's It a Big Deal?
Ever Wonder What Sport Mode Really Does?
What's the Ring on the Bottom of Your Skillet For?
Your Button-Up Shirt Has a Weird, Sideways Detail
Why There's a Loop on the Back of Your Shirt
Why Are So Many Door Knobs Made of Brass?
Why Do Aviator Sunglasses Come With Green Lenses?