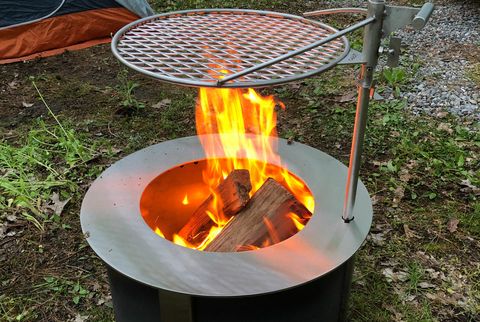 Car camping has plenty of advantages, but the biggest by far is the ability to carry more gear than you would otherwise. If you’re hiking or bike-camping, you’re limited to whatever you can haul about using muscle power; use a motor vehicle as a base of operations, however, and the only real limit is the amount of space inside your ride. (And if that’s not enough, you can always add to that with a rooftop tent, bike rack or trailer.)

Usually, in my experience, that space in the back of the car goes towards extra food or drink, or maybe a place for an air mattress. But why restrict yourself to that? Empty space is empty space, meant to be filled with anything you can imagine. So when it came time for an early summer camping trip to Pennsylvania, I decided to put something unorthodox into the cargo area of the Range Rover Velar SVAutobiography Dynamic: a Breeo X Series 24 fire pit and its associated Outpost camp cooking attachment. How’d it work? Read on, dear friend.

Did you know the Breeo X Series 24 fire pit weighs 78 pounds? Neither did I! At least, until I picked it up to load it into the back of the Range Rover. Luckily, the Velar‘s wide hatch and load floor height made loading the mighty metal bowl comparatively easy; God knows how I would have managed trying to put it into a sedan. (Also, chalk this up as one of the advantages of SUVs over station wagons.)

The weight wouldn’t have been so awkward if the fire pit had better places to hang onto. Unfortunately, its smooth metal skin is largely bereft of handholds, while its girth made wrapping my arms around it in a bear hug impossible — at least, without running the risk of slamming my chin into that steel lip. I wound up holding it by said lip with the tips of my fingers, a solution that I wouldn’t recommend for trips of more than 10 feet.

The Outpost grille attachment was a good bit easier to lug about, thanks to the handy carrying case it came with. Still, it never fit into it quite right; the metal post always protruded from it, which made loading it into the car with the other gear a bit of a game of Tetris.

Having the Breeo at the camp site was a delight

Setup once we arrived was simple, if not quite easy: shuffle fire pit to the edge of the cargo bay, lift with legs, stagger it to appropriate place on campsite and place down with slightly more vigor than anticipated; combine two pieces of Outpost and insert into slot; kick back with beer until fire time.

Once said time rolled around, the Breeo made all the effort of getting it there worthwhile. The thick steel walls provided spectacular protection from wind, while the vents at the bottom created a nigh-on perfect updraft to keep the flames growing once the fire had been started. If anything, it was too damn good; it burned so hot and bright, I wound up using twice as much wood as I’d expected.

Still, there was no arguing with the results: it made the ring-shaped “sear plate” cooking surface that surrounds the pit so hot, it cooked meat like a diner’s griddle. (In the interest of science, I set a match down on the plate, and it combusted within two seconds from the conduction.) Plus, the steel walls reflected the glow of the flames better than I’d thought, providing a nice source of illumination.

The Outpost wasn’t quite the grilling game-changer I’d hoped for, sadly. Even as hot as the fire was, the grille surface was too high above the fire to do much good. After all, it’s the coals, not the flame, that do the cooking, and the Outpost’s slot in the side of the pit puts the food a good two feet above the heat source. It worked well enough for cooking hot dogs and toasting hamburger buns, but burgers and vegetables themselves needed to go on the sear plate. If I were to use it again, I’d jam the post into the ground instead. (Which, to be fair, is also what you’re supposed to do with the Outpost when you take it camping on its own.)

…at least, until it came time to clean it up and leave

The morning we departed, though, the Breeo’s biggest flaw revealed itself: it’s incredibly hard to clean. Two night of hot-burning fires had left the bottom filled with a couple inches of fine, pale ash, with no easy way to clean it out. Being a fire pit novice, I hadn’t thought to bring a camp shovel, so we had to resort to scooping the ashes out with a paper cup and placing them in the camp site’s permanent fire pit.

Scrubbing the grease off the sear plate proved its own hassle, as well. Breeo suggests using a grille brush or scraper to remove big food chunks first, followed by a heavy-duty kitchen degreaser and a Scotch-Brite pad. We had…paper towels and hand soap. Between that and the mild headache that came with a dehydrating night of inhaling smoke and drinking less water and more alcohol, the cleanup proved a rather disheartening hour-long process.

To be fair, these are more flaws of user error than design; if we’d brought along all the right tools, it would have been much easier. Still, bringing all that would have added even more weight and complexity to the Breeo package — which it hardly needs. As a backyard fire pit, this Breeo fire pit seems like a wonderful companion. As a car camping accessory…it’s probably more trouble than it’s worth.

Breeo provided this product for review.