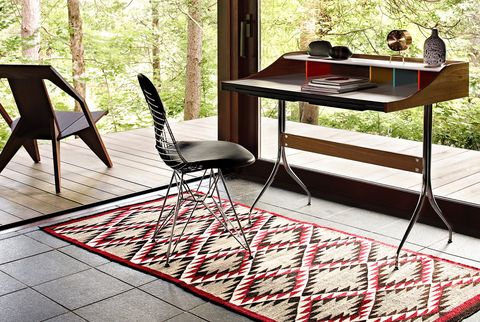 It’s difficult to wrap arms around the importance of Herman Miller’s contributions to American design. What started as a small Michigan company turning out reproductions of traditional furniture became the darling of mid-century modernism. Through different pieces, it has largely defined the contours of the American workplace and helped lead the charge in sustainable design.

Its archives are overflowing with products from names and studios you read about in textbooks — Charles and Ray Eames, Isamu Noguchi, Jasper Morrison, George Nelson, Bill Stumpf, Konstantin Grcic, Naoto Fukusawa and too many more to name. There are more hits, innovations and groundbreaking shifts in design philosophy than there’s time to count, so we’ve assembled (in no particular order of importance) nine of Herman Miller’s most influential designs to-date. And yes, you may see the name Eames pop up once or twice.

The Eameses fingerprints are all over Herman Miller’s design aesthetic. And while a particular leather-clad lounger is the first thing we think of when we hear their name, it wouldn’t exist without the Molded Plywood chair — a design that would go on to earn every award in the book, including Time Magazine’s Design of the Century.

Isamu Noguchi is one of the more idiosyncratic mid-century masters. He got his start as a sculptor, moving onto product design afterward. That context is important in understanding Noguchi’s approach to modernism relative to others — for him, art and design were one in the same, both things to fade into the surroundings they occupy. His table, one of the most knocked-off pieces of furniture ever, is the culmination of his philosophy. The glass-topped table appears to float over two interlocking cuts of wood, with the room surrounding quite literally bleeding through the glass.

Gilbert Rohde may be the least known designer of those enshrined in the Herman Miller pantheon. Reluctantly hired by Herman Miller’s first president, DJ De Pree, Rohde was tasked with pulling a then struggling brand through the Great Depression. He did that, and in 1942 his Executive Office Group (EOG) changed how we see the places we work.

In short, Rohde’s office gear cut out any design flourish that didn’t serve a purpose. Amid its fully modular collection of desks, storage areas, dividers and add-ons was something more fundamental — the evolution of the office, from traditional and dense to freely modern. Or, in Rhode’s words, “where office furniture that is modern from the inside as well as the outside, modern in the works as well as in the way it looks.” Sadly, the only way to get your hands on EOG now is buying vintage from sites like 1stDibs and Pamono.

Though it made its name in WWII-era America, the Herman Miller of today has continued to evolve. Bill Stumpf and Don Chadwick’s Aeron chair epitomizes that evolution.

Released during the dot-com boom of the mid-90s, Aeron is the chair that marks the beginning one era and end of another. It took task-chair design from a form-first industry to a function-first one, replacing clean lines with a chair that mimicked the shape of the human body; it also signaled the end of the classic corporate hierarchy, where the height and width of a desk chair grew with the title of the sitter. For posterity, it owns permanent real estate in the Museum of Modern Art.

The newest product on this list is one of our favorite things to come out of a product-packed 2018. Designed by the frequent Herman Miller collaborators at Studio 7.5, Cosm is the anti-Aeron. The culmination of decades of office chair design, it has just one lever for manual adjustment (height). Herman Miller was not the first company to release a passively ergonomic chair, but Cosm is the most complete version of the auto-adaptable vision.

The Swag Leg Desk began with Nelson’s vision for furniture with sculpted legs, which evolved into metal sculpted legs. Eventually, he set his sights on sculpted metal legs that were machine-made, packageable and prefinished. With help from Charles Pollock — a meritorious designer in his own right — Nelson achieved just that.

Pollock developed a technique called “swaging” that involved the application of extreme pressure to metal for the purposes of bending or sculpting. This is the foundation of Nelson’s Swag Leg Desk. Four curvy steel legs fit into a walnut desk with colorful cubby holes, plenty of table space and removable organization drawers.

This is the chair that made a pair of furniture designers — Charles and Ray Eames — household names. Designed to lessen pressure on the lower back and mimic the look of a baseball mitt (leather folds included), it is Herman Miller human-first philosophy at its finest. New examples are made today in much the same way they were in decades past.

Charles and Ray Eames released the molded fiber glass chair in 1950. Unlike the majority of chairs back then, it was deliberately shaped to allow the user remain comfortable in a variety of seated positions. In the early 2000s, Herman Miller sought to update the Eamses economic design with more sustainable materials, replacing fiber glass with polypropylene, a fully-recyclable thermoplastic known for durability and versatility. The modernized Eames chair comes with wood or metal legs.

Related article
Why Herman Miller’s Cosm Is the Most Important Office Chair in Decades
Will Price Assistant Editor, Home and Design Will Price is Gear Patrol’s home and drinks editor.
This content is created and maintained by a third party, and imported onto this page to help users provide their email addresses. You may be able to find more information about this and similar content at piano.io
Advertisement - Continue Reading Below
More From Buying Guides
The 5 Best Rain Tires for Motorcycles
The Best Multi-Room Wireless Speakers of 2020
Advertisement - Continue Reading Below
The 9 Best Commuter Bikes for Every Road and Rider
The Complete Buying Guide to Hamilton Watches
The 9 Best Vegan Boots for Men
The Complete Mercedes-Benz Buying Guide
The 7 Best Beard Trimmers You Can Buy in 2020
The Best New Fitness Products of September 2020
9 Superb Watch Winders for the Budding Collector
The Best Motorcycles for Shorter Riders