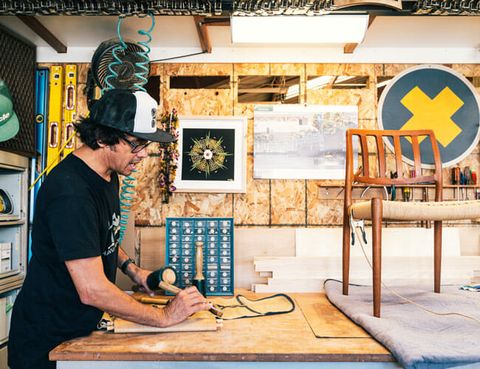 Editor’s Note: Of all the places in the world to call home, Hawaii offers a life that is wholly unique. In this three-part series, Modern Hawaii, we’re profiling business owners on Oahu who are choosing the Hawaiian lifestyle above all else.

It’s been more than a decade since John Reyno left California to begin anew in Hawaii. Trading a successful career as a welder, he, almost by chance, has become the go-to purveyor of mid-century modern furniture on the island of Oahu.

“After that career, I was collecting furniture for fun,” says Reyno. “I really got into design. There wasn’t a lot of it being restored here so I started doing it by necessity.”

“I did that for 23 years, working 6 days a week. That can be lucrative but it’s not so fun for the soul. I realized at 39 that by 40 I wanted to be done with that. I took a chance and moved to Hawaii to slow down really and appreciate another part of my life.”

Isolated some 2,390 miles from California and 3,850 miles from Japan, Hawaii’s population center is the most isolated on earth. While that impacts its inhabitants in a variety of ways, for Reyno, it has meant there is an abundance of mid-century furniture to reclaim.

He credits the uptick of air travel and tourism in the 1950s and ‘60s for the design boom on Oahu. “It started growing as an island — everyone was building. Homes built in that period were filled with these pieces,” he says. And most of that hasn’t left. “It’s really expensive to ship off the island so stuff stays here. It’s not collected as much as it is on the mainland so it’s still in nooks and crannies and auntie’s houses. There’s a lot of it here.”

As Reyno has established himself on Oahu, the need to knock on doors to find furniture to restore has become less and less. “It’s gone from the thrill of the chase to having a lot of stuff come to me. People know I am the source for it so they offer it to me first.”

Related article
Here’s a Mesh Sneaker That Can Go from the Beach to the Office
Gear Patrol Studios Gear Patrol Studios is the award-winning branded content agency of Gear Patrol based in New York City.
This content is created and maintained by a third party, and imported onto this page to help users provide their email addresses. You may be able to find more information about this and similar content at piano.io
Advertisement - Continue Reading Below
More From Sponsored
The 10 Best Yoga Mats for 2020
Today in Gear: The New Seiko 5 Collection, the Best Coffee Makers for Camping & More
Advertisement - Continue Reading Below
Today’s Best Deals: An Easier Way to Buy an Engagement Ring, a Discounted Vibrating Foam Roller & More
Couple Lab-Grown Diamonds Make Shopping For An Engagement Ring Easy
The New Seiko 5 Sports Will Up Your Everyday Style
The First Analog FROGMAN From G-SHOCK Is A Big Leap Forward
Today in Gear: Custom Lab-Grown Diamond Rings, 10 Inexpensive but Functional Desks & More
Today’s Best Deals: An Excellent Tool for Sharpening Your Knives, Discounted Furniture Made in America & More
Snag This Knife Sharpener From Amazon’s Deal of The Day
Couple Lab-Grown Diamonds Will Elevate Your Proposal, Even During A Pandemic