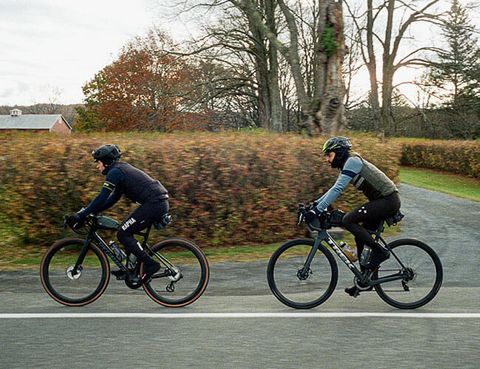 I must’ve been in the seventh or eighth grade when a friend and I decided that, one day, we’d ride our bikes from our home in southern Vermont to New York City. The boundaries of our personal maps had recently expanded with the parental approval of unsupervised bike riding, but not nearly as far as they would upon earning a driver’s license. Adventure was still attainable.

Our dauntless ambition was more the product of ideas drawn from The Lord of the Rings and a combined library of video games swirling in our teenage brains than any notion of long-distance cycling. And yet, when the idea resurfaced a decade and a half later — and with more than a few maps traced with previous journeys by foot and vehicle — I still had no notion of what it really might mean to pedal a bike for more than 200 miles.

This time, the proposition showed itself with a recently acquired bike. The bike in question is an aluminum machine made for cruising and commuting, but I couldn’t help but wonder if I could take it from my new home in New York to my old home in Vermont. I did so audibly, and a friend — it seems these schemes germinate best when rooted in more than one imagination — assured me that whether the bike was fit for the task or not, we should attempt it. More than a year later, we made good on an unknown sum of conversations and set it in stone (we made a Google Calendar event).

When the characteristically brisk November morning finally came, the pair of us, plus a third who was eager to join, met beneath the statue of General William Tecumseh Sherman at the gates of Central Park. We had each taken various measures to prepare. They had spent a summer and fall riding 50-plus miles with some regularity. During that same time, I logged roughly two thirds as many miles as I was about to travel in the next 36 hours.

I also traded in my city cruiser for something more streamlined: Trek’s Domane SLR 7, a far lighter road bike with endurance and comfort layered into its carbon fiber frame. The bike is uninhibited by fenders and any such unnecessary practicality but spurred by aerodynamic tubes and electronic shifting.

We clicked in and began our roll, the general and the Plaza at our backs, and the darkness of the park ahead. Leaving the city by bike is a journey in itself, condensed and traversing unseen urban demarcations. We emerged from Central Park’s curated nature into Harlem, pedaling up St. Nicholas Avenue along a route that horse-drawn carriages used as a speedway during the 19th century.

When we could, we made our way to the bike path along the East River, only re-entering the city’s grid when forced to cross the water via the Broadway Bridge. It was that transitory, hazy-eyed hour that’s early for some yet late for others. We passed vendors beginning to roll out their mobile food stalls and, just before the bridge, a prostitute leaning against the driver’s side window of an idling vehicle.

Only minutes later, the silence and pitch black of Van Cortlandt Park’s woods engulfed us. Due to a navigational error, we meandered through the trees on gravel paths for 45 minutes before the tangle spat us out into the suburbia on its northern end. Luckily, our route kept us in this sprawl for less than a mile before we picked up the South County Trailway, a rail corridor that now hosts a paved path instead of rails and ballast.

There’s no better way to travel on a bike than by rail trail. The grade is flat and, except where creeping roots have displaced their asphalt cover, smooth. We rode a dozen feet from one of the primary tributaries that carries passenger cars into and out of New York City, but if it weren’t for the occasional whir of traffic, we wouldn’t have known it. Raised banks on either side shielded us from that which we could only hear, and the autumn canopy above encased us in a golden vault. There are more than 75 rail trails in the state of New York alone, and by linking together as many as we could, we covered some 50 miles in such cycling bliss.

With the city far behind, we traveled over bucolic New England roads, where ponds, stone walls and livestock abound. Ride any double-digit distance on a bike, and you’re bound to come to know your steed intimately. The legs on autopilot, the mind goes where it wants, but often down to the bike, and the space that rider occupies on it. The cockpit.

I felt the handlebars, the tape wrapping them, the fabric of the gloves on my hands. I could reach for one of my two bottles, each spiked with a carbohydrate drink mix, without looking. I maintained access to these as well as my phone, a GPS-equipped computer, a camera, raspberry energy chews, granola bars and yogurt-covered pretzels, all with a single hand.

I reached for all of these things regularly with my upper body as my disassociated lower body-powered the Madone through town after town and over hill after picturesque hill. The miles ticked away, 70, 80, 90 until we crossed that symbolic distance milestone: 100. At 112, the sun dipped, the temperature dropped and a notable brewery loomed. We ordered pints, ate a loaf of freshly baked sourdough and hitched a ride in an RV — filled with six full-grown men dressed as unicorns — to our nearby Airbnb.

I could describe the country roads that led us on that second day from a small town in the Hudson Valley to a small town in southern Vermont. How, without the adrenaline of departure, the second morning proved markedly more difficult. I could write of the topography of the eternal hill between Canaan and New Lebanon, or our realization that much of the final 20-mile stretch would be on dirt. But the tale of the journey is perhaps best left abridged.

The reverse completion of my teenage quest wasn’t without its toll, either: three flat tires, two forced hitchhikes, one banged-up camera. Countless calories consumed in liquid form. Muscles sorer than they’ve ever been. After 20 hours and 203 miles, we rolled into my hometown, unclipped from our pedals and squat-walked into the local Mexican restaurant, where we celebrated with guacamole and margaritas. The next morning, we loaded our bikes onto a car and drove back to the city.