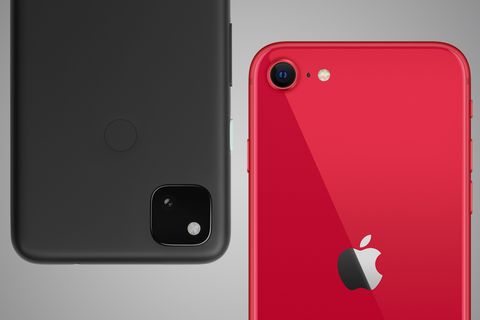 It's 2020 and the battle of the affordable smartphones is on. Earlier this year, Apple finally resurrected its "SE" line with the iPhone 8-shaped iPhone SE and Google announced the Pixel 4a -- successor to one of our favorite gadgets of 2019.

But there's only so much you can learn by comparing spec sheets, so we decided to put these phones head to head on one of their most important features: the camera.

While specs aren't the only thing that's important, they _are_ important, so lets compare on paper real quick. Both phones' rear cameras are a single lens, with any advanced optical features they share with multi-lens systems (like portrait mode) emulated in software. The iPhone SE's camera is a 12-megapixel shooter with a f/1.8 aperture and optical image stabilization. The Pixel 4a's is 12.2 megapixels, with an f/1.7 aperture and optical image stabilization as well. So virtually identical.

On the front the iPhone SE sports a 7-megapixel shooter while the Pixel 4a has 8MP cam, but the biggest difference between them (as you'll see below) is that the Pixel 4a's 84-degree front-facing camera has a slightly wider field-of-view than the iPhone SE's. But how do the photos hold up?

Because phones only have a single rear-facing camera, both make use of software tricks to separate the subject and create a creamy "bokeh" behind them. This leaves a bit of room for error as you'll spot with the Pixel 4a, where you can see that the background areas around my right sleeve are still jarringly in focus, because the software thought it was part of my body. The iPhone SE's computer vision isn't perfect either, but it's blurred my sleeve instead of sharpening the background, which is far easier to overlook.

The shooting experience is also very different: while the iPhone SE shows you what your background blur will look like as you're lining up your shot through the screen, the Pixel 4a only applies blur after you've taken your shot, and will just fire off a normal photo if you're subject isn't far enough from their background.

The only huge caveat for the iPhone SE's portrait mode is that it can only work on people. The Pixel 4a's can also be applied to photos of objects or pets.

Winner: iPhone SE for people, but Pixel 4a for anything else

Both Apple and Google have software assisted long-exposure modes to help you take photos in the dark, but only Google has opted to include it on its budget phone. As a result, the Pixel 4a is just leaps and bounds above the iPhone SE in low-light performance simply because it has more tools to take on the challenging scenario. The iPhone SE isn't too bad in low-light for a camera with no special compensation features, but it's still no contest.

Neither the Pixel 4a nor iPhone SE has a wide angle lense, so the widest you'll get is your typical field of view. Under typical circumstances and at a glance, the difference between the Pixel 4a and iPhone SE is virtually indistinguishable. It's almost impossible to tell them apart. At a very close crop, you can see some differences in the noise patterns around details, which the Pixel 4a handles just slightly better, but you'll rarely if ever be in a position to notice this.

Neither the Pixel 4a nor the iPhone SE have any sort of optical zoom, so when you are zooming you are actually just cropping, which brings those noise patters back into play. Neither camera handles this well, but the key is in how, exactly, their results are bad. Where the Pixel 4a's images are rather muddy, the iPhone SE's tend to be more "jaggy." The result is that the iPhone SE's zooms look sharp at a glance, but start to look like technogarabge if you crop in any further than the camera allows. The Pixel 4a's look decent at its already higher zoom rate, and can handle a little cropping before they look like a total mud puddle.

Odds are that your selfie-cam pictures are going to be of people, and that's where the iPhone excels. Its slightly tighter angle makes it a little tougher to squeeze people in with a group shot, but it's rendering of my skin tone is much more pleasant than the the Pixel 4a's, which records a level of detail on my forehead that frankly no one should ever have to witness. Both cameras support portrait mode on the front facing camera, and it's subject to all the same observations of using the feature on the rear-facing camera as well.

This content is created and maintained by a third party, and imported onto this page to help users provide their email addresses. You may be able to find more information about this and similar content at piano.io
Advertisement - Continue Reading Below
More From Tech
iOS 14 Is Jam-Packed With New Features
Presented by
Crown & Caliber
All the Best New Gadgets Announced This Week
Advertisement - Continue Reading Below
Dolby's Quest to Make Atmos the New Stereo Sound
Amazon Completely Redesigned its Echo Speakers
This App Helps Customize Your iPhone's Home Screen
The Best Standing Desks for the Home or Office
KEF Made the Ultimate Hi-Fi Speaker System (Again)
Why the Series 6 Is the Best Apple Watch Ever
What the Orange Dot on Your iPhone Means
Did Logitech Create the Perfect Portable Mouse?