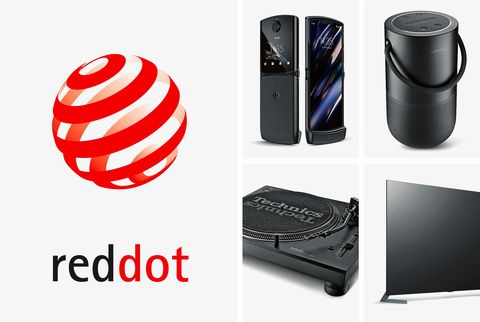 The Design Zentrum Nordrhein Westfalen in Essen, Germany hosts an annual design competition for the best-designed products of the year. It’s called the Red Dot Design Awards. The prestigious competition has taken place every year since 1955 and spans a number of categories, including cars, audio, watches, home entertainment and cookware (just to name a few). This year’s design award winners have just announced and we’ve gone through them — in the categories of audio, TVs and home theater and mobile — to select some of our favorites. Below, every one of the products is a newly-minted Red Dot Design Award winner for 2020.

Google’s tiny-little smart speaker has been around for a few years, but in the past year it was given a new name (previously the Google Home Mini) and a new colorful and fabric-laden look. This is what the Red Dot Design Award jury had to say about the Google Nest Mini: “This speaker houses a large number of smart functions in a compact design and enhances any room with its appealing appearance.”

The Sonos Move is the comppany’s first portable speaker with Bluetooth built-in. Sonos also regiggered its TruePlay technology so that the Move will automatically sound great for whichever room its in. This is what the Red Dot Design Award jury had to say about it: “[The] Sonos Move captivates with a universal design which brings together robustness for outdoor use and understated elegance for indoor use.”

The Bose Portable Home Speaker is a portable Wi-Fi- and Bluetooth-enabled speaker that’s effectively a direct rival to the Sonos Move. According to the Red Dot Design Award jury: “The elegantly designed speaker is impressively versatile. It is perfectly set up for use while on the go and cuts a good figure at home as well.”

The AirPods Pro are Apple’s first wireless earbuds that have active noise-cancellation and, come iOS 14, they’re about to gain support for some pretty cool immersive sound technologies. According to the Red Dot Award jury, “the AirPods Pro lift the quality of in-ear headphones to a new level. They are very light and deliver an impressively powerful immersive sound.”

If you’re spending $20,000 on TV, it better be stunning and its picture better be near perfect — and, well, LG’s flagship 8K OLED just about delivers. According to the Red Dot Award jury: “The OLED television is captivating with its understated design and inventive bracket, which allows the TV to blend in to the wall.”

The razr is a beautiful reimagining of the company’s classic flip phone. The new model is packed with bleeding-edge tech, like a 6.2-inch folding plastic OLED screen. This is what the Red Dot Award jury had to say: “The design of the Motorola razr mobile phone reinterprets the appearance of classic flip phone models. Elegantly designed, it rests comfortably in the hand and evokes nostalgic memories. ”

This 4K media player has a unique design for optimized cooling, and its remote has triangular design which feels better in your hand and allows it stand on its own. According to the Red Dot Award jury: “The media player and remote control are appealing with their stand-alone design, which creates a sense of uniformity despite their differing geometry.”

The PowerPort Atom III Slim is a 30-watt power adapter that’s a little over half-an-inch thick (0.63-inches to be exact) and is capable of fast charging any of the latest iPhones and charging USB-C laptops. According to the Red Dot Award jury: “The elegant PowerPort Atom III Slim power bank impresses with its extraordinarily thin profile and remarkable performance.”