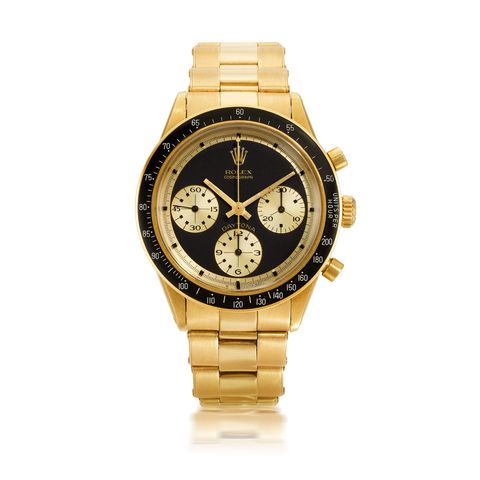 The "John Player Special," so named for the John Player-brand cigarettes livery found on 1970s Lotus Formula One cars, describes a special black and gold look that's instantly recognizable to collectors and Daytona devotees. This particular JPS is particularly notable, however, for having been produced in 18k yellow gold rather than steel (only about 10 examples are known) and further, for featuring a "Paul Newman"-style exotic dial in black. Smashing past its estimate of $400,000-$800,000, the watch hammered for a final sale price of $1,545,723.

With online auctions becoming more and more commonplace during the era of COVID-19, we're surely poised to see more horological sales records broken in the future. Since the beginning of 2020, Sotheby's alone has sold more than $48 million in the watches category.

This content is created and maintained by a third party, and imported onto this page to help users provide their email addresses. You may be able to find more information about this and similar content at piano.io
Advertisement - Continue Reading Below
More From Tool Watches
Why Your Watch's Seconds Hand Is Important
Seiko 5 Watches Are Extra Affordable Right Now
Advertisement - Continue Reading Below
Match Your Watch to Your Swiss Army Knife
This New Dive Watch Features a '70s-Inspired Color
Take 50% Off This Funky Seiko Chronograph Watch
How to Evaluate a Watch Purchase
Pilots Will Use This Watch to Break a Speed Record
This Watch Honors the Fastest Motorsport on Earth
Get This Cool All-Black Timex Watch for 60% Off
Check Out This Affordable Military Watch Homage