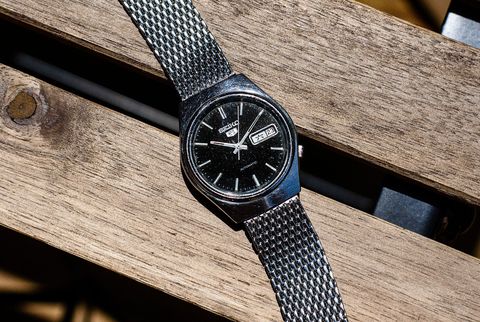 Every once in a while I’ll unearth some article online explaining how a very expensive Swiss watch is actually an incredible investment, a damn near necessity if you’re mechanically inclined and have “an appreciation for craftsmanship.” Why, for just the cost of a down payment on a car, you too could own a metallic chunk of The Grand Swiss Tradition and wear it on your wrist! And it has soul. It’s a bargain!

Of course, these arguments don’t fall on deaf ears. I like watches. Fancy ones at that. But when I hear these fervent justifications, or hear enthusiasts refer to their six-figure timepieces as their first “real watch” purchases, I can’t help but feel like we’re saying an entire strata of the watch industry is unsuitable for enthusiasts. I’m talking not about watches that cost hundreds instead of thousands, either. I’m talking about most dirt-cheap pieces out there, the watch you can pick up for under $100 then wear until it dies – which could very well take a long time.

For example, just Google “Seiko 5” and you’ll turn up plenty of opinion pieces and forum posts about Japan’s trusty little bargain-bin timepiece. Amazon has no shortage of new models that retail somewhere in the $90 range, and even if that’s too rich for your blood, you can turn to eBay and find scores of vintage models for less money. My Seiko 5, a reference from the 1970s, arrived at my doorstep after drunkenly perusing eBay one night in college and subsequently parting with $25.

I’ve worn it sparingly in the years since, mostly because I have a plethora of watches to choose from, but I’ve worn it anywhere and any time I didn’t want to wear anything more valuable. Beach trips. Gardening. Taking care of puppies with a tendency to bite everything within snout’s reach, even if said thing is made from solid stainless steel. For an old mechanical watch, it continues to function exceptionally, often better than many of my more expensive vintage watches which have all proven to be fussy in one way or another.

The Seiko 5, I once was told by a Seiko employee, is essentially a “third-world watch,” meant to function and function properly for years in areas where getting a battery change in a quartz watch isn’t as easy or straightforward as it is elsewhere. Its sort of an anomaly in this regard as there aren’t many other mechanical watches in this price range, though it’s far from the only one: Orient similarly makes the Tri-Star, a stupidly-simple automatic you can regularly find around $80; Citizen even makes the NH8350, a dressy automatic that will cost you a bit over $100.

But do you have to buy mechanical to have something cheap with a perceived sense of “soul”? I don’t think so, and there are plenty of Timexes, solar-powered Citizens and Casios you can buy at similarly low prices. They strive to offer a degree of functionality and design at equally dirt-cheap prices. Timex’s aluminum Mk1 is one such example; you likely won’t find another aluminum-cased watch for under $50. Meanwhile, for $40, Casio will sell you a digital watch with an alarm and chronograph that will refuse to die, even when you hit it with a hammer or maliciously throw it from your balcony.

That alone is indicative of what makes these cheap watches so loveable. They just quietly and competently do their job, and you can carry on your day without worry. If you’ve ever worn a pricey watch, you’ll know that there’s always a creeping sense of anxiety. Every retaining wall and every door jamb is an opportunity to scuff that perfectly-finished case or scramble that meticulously assembled mechanical movement.

And we should expect a mechanical watch that costs thousands of dollars to feel special. But with super cheap watches, the expectation is only that they tell time, without any mental gymnastics or further justifications needed. This in itself is freeing, but more often than not these super-cheap watches can exceed these expectations. A Casio that survives hammer blow after hammer blow and a three-story fall exceeds expectations, and a vintage, $25 mechanical watch that continues to properly function certainly exceeds expectations, too. Will they appreciate in value or win you admiration in the collector’s community? Probably not. But they’ll still find a way to burrow themselves deep in your heart. That alone is impressive.

This content is created and maintained by a third party, and imported onto this page to help users provide their email addresses. You may be able to find more information about this and similar content at piano.io
Advertisement - Continue Reading Below
More From Opinions & Essays
This Is The Only Motorcycle Helmet I'll Ever Buy
This Workout Recovery Tool Is My New WFH Essential
Advertisement - Continue Reading Below
Don't Choose the Sportiest Trim When You Buy a Car
No One Is Impressed by Your Enormous Coffee Mug
This 3D-Printed Bike Has Crowdfunded $3.4 Million
Should You Buy Crocs?
These Awesome Sport "Headphones" Cost Just $40
The Ford Bronco May Spell Trouble for the Defender
Follow This Australian Masterchef's Instagram Now
I Can't Believe I Went Without a Second Screen