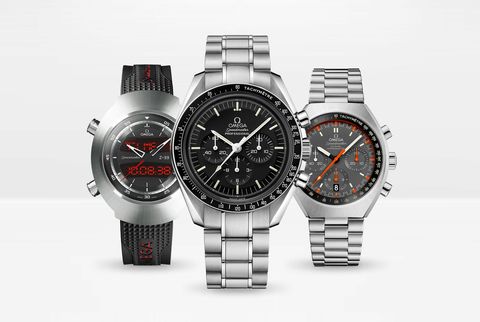 Welcome to Brand Breakdown, a series of comprehensive yet easy-to-digest guides to your favorite companies, with insights and information you won’t find on the average About page.

The Omega Speedmaster needs no introduction.

It’s not only one of the most historically significant wristwatch models in existence, but it’s also one of the most instantly recognizable. Hand-picked by NASA as its official chronograph watch for manned space flight 50 years ago, there is perhaps no other timepiece in the world that has passed a similarly grueling test process with flying colors and come, ultimately, to symbolize man’s conquest of the unknown.

Today, we continue to see some of the Speedmaster’s original design elements, such as the triple-register dial and engraved tachymeter bezel, in a number of modern incarnations. However, the Speedmaster has also seen a number of updates over the years. Variations such as the Mark II introduced features like a tonneau-shaped case and self-winding movement.

Today, there are numerous variations of the Speedy in Omega’s catalog. If you’re in the market for one of the latest versions of this legendary model but feel overwhelmed by all the choice, we have you covered — we’ve detailed an emblematic model from each of the ten sub-collections of the Speedmaster below. Now all you have to do is choose one.

As the name suggests, the Omega Speedmaster Professional Moonwatch is the model that made history in 1969 as the first watch on the moon. To this day, Omega continues to work closely with NASA on certifying Speedmasters for manned spaceflight, yet the Moontwatch’s design has remained largely unchanged for 50 years.

The modern version incorporates many classic features – the three-register dial and tachymeter scale – as well as Super-LumiNova hands and indices, a hesalite crystal, and a stainless steel case. You can find it in four standard iterations, with options for a stainless steel bracelet or leather strap and solid or sapphire case back.
Movement: Caliber 1861 (hand-wound)
Diameter: 42mm
Water Resistance: 5 bar

The Speedmaster ’57 pays homage to the original Speedmaster of, you guessed it, 1957. Here, we see almost an exact replica of the debut model. It showcases the distinctive case design featuring broad arrow hands and straight lugs extending from the watch case. The most notable change is the number of subdials – two as opposed to three. (Instead of a third dial, the Speedmaster ’57 incorporates a date window at the six-o’clock position.)

Additionally, there’s a major upgrade under the hood with the addition of one of Omega’s exclusive, in-house Co-Axial calibers, viewable in all its glory through the sapphire case back. Offered in a whopping eighteen variations, including the model from the 1957 Trilogy, the Speedy ’57 has a little something for everyone.
Movement: Co-Axial Caliber 9300
Diameter: 41.5mm
Water Resistance: 10 bar

The same year the Speedmaster Professional landed on the moon, Omega introduced the Mark II. Its distinguished tonneau case gives it a more streamlined look than its counterparts. Yet, it still incorporates some of the Speedy’s iconic features, like the triple register dial. In the Mark II, we also see the tachymeter bezel, this time as a transparent scale on the sapphire crystal that’s illuminated from beneath by an aluminum ring filled with Super-LumiNova.

Another divergence from the 1969 variation is the addition of a date window positioned within the subdial at the six-o’clock position. The modern Mark II is available in three variations including stainless steel and two-tone along with various dial options.
Movement: Co-Axial Caliber 3330
Diameter: 42.4mm
Water Resistance:

Though the Speedmaster is most often associated with its application in outer space, Omega originally designed the model as a racing chronograph. The Racing collection celebrates the Speedy’s motor racing heritage with elements like a distinctive alternating minute-track. Other features include three expanded sub-dials, beveled arrowhead indices treated with Super-LumiNova, and a Master Chronometer movement certified by METAS.

If you want to up the ante on the sportiness, there’s a black leather rallye strap with micro-perforations revealing orange rubber accents. However, if a subtle, classic look is more your thing, you can choose from one of 24 unique variations of the Racing models.
Movement: Co-Axial Master Chronometer 9900
Diameter: 44.25mm
Water Resistance: 5 bar

For a more refined look backed by the trusted Speedmaster name, look no further than the Speedmaster 38. As the name indicates, the collection harks back to the model’s original, modest 38mm size with modern updates. One of the most notable features is the unique design of the sub-dials and date window. Drawing inspiration from the De Ville collection, Omega has incorporated soft, oval shapes into the iconic triple-register dial and date function.

As another nod to Speedies past, the Speedmaster 38 models showcase the famous Seahorse medallion on the case back. With 16 different iterations offering vibrant colorways, diamond accents, and strap options, Omega designed the Speedmaster 38 to suit any style.
Movement: Co-Axial Caliber 3330
Diameter: 38mm
Water Resistance: 10 bar

Similar to the 38 collection but with an even more simplified design, the classic Speedmaster is a fitting tribute to the iconic model. In this variation, Omega has pared everything down except for the style options, with offerings in a number of neutral hues, stainless steel or leather straps, and the addition of diamond accents. At the heart of this classic Speedmaster chronograph is the brand’s mechanical caliber 3304 movement.
Movement: Mechanical Caliber 3304
Diameter: 38mm
Water Resistance: 10 bar

Distinct features include a black carbon fiber dial and a case back etched with a colorful Solar Impulse patch. To complete the look, the model comes equipped with a bold rubber strap boasting a textured finish on the interior that’s reminiscent of Solar Impulse’s carbon fiber-honeycomb composite structure. In addition to two colorways featuring rubber straps, the Solar Impulse Speedy is available in a third version with a titanium bracelet.
Movement: Co-Axial Caliber 3603
Diameter: 44.25mm
Water Resistance: 10 bar

Omega created the Speedmaster X-33 Regatta ETNZ Limited Edition as a tribute to Emirates Team New Zealand’s bid to win the 35th America’s Cup in Bermuda back in 2017. They designed the model specifically with the crewmembers in mind with features optimized to withstand the conditions of the race. At the heart of the model is a Regatta function, complete with a single red button to activate the crucial countdown to the start of the race. It features a series of alarms, each with its own unique ringing sequence. In addition, the X-33 Regatta showcases both analog and digital readings.
Movement: Caliber 5620
Diameter: 45mm
Water Resistance: 3 bar

The Speedmaster Professional X-33 first debuted in 1998. The Skywalker X-33 is an innovative upgrade of the original powered by an advanced quartz caliber with a thermo-compensated integrated circuit. Similar to the X-33 Regatta, the Skywalker X-33 has a hybrid analog and digital display. It allows you to read up to three different time zones and comes equipped with three alarms as well as perpetual calendar, chronograph, and countdown functions. As an extension of Omega’s legacy in space, The European Space Agency (ESA) has approved the Skywalker X-33 for all its missions.
Movement: Quartz Caliber 5619
Diameter: 45mm
Water Resistance: 3 bar

The Spacemaster Z-33 draws inspiration from the legendary “Omega Pilot’s Line” (Flightmaster 1969). Like the Skywalker X-33, it comes equipped with an all-new multifunction quartz caliber and showcases both analog and digital readings. In addition, the Spacemaster Z-33 features a grade 5 titanium case construction with a double-wall case back. Last but not least, it allows you to read up to two time zones and boasts an alarm function, chronograph mechanism, countdown timer, and perpetual calendar.
Movement: Quartz Caliber 5666
Diameter: 43mm
Water Resistance: 3 bar