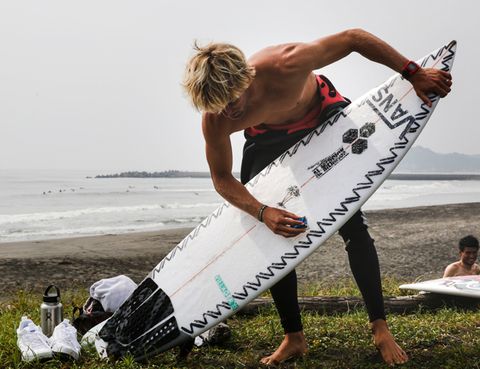 The life of a modern professional athlete is a life on the road. But for elite surfers using the world’s oceans as their stadiums, the airline miles and opportunities for adventure rack up faster than for most. Surf Break offers a behind-the-scenes look at how professional surfers fill in their days and hours off the waves, often immersed in a culture that’s not their own. Our inaugural films shadow famed brothers Tanner and Pat Gudauskas on a recent journey throughout Japan.

Large swaths of lush farmland, pieced together, blanket the Chiba prefecture. The crops range from the familiar — carrots, cabbage and daikon radish — to regionally specific — like negi, loquat and nashi. There’s also rice — integral to many time-honored traditions still in place in Japan. The paddies stretch from hilltop to hilltop, occupying the open clearings between forests and bordering the sand dunes near the beach. Endless rows of rice emerge from still water, reflecting the cloud-dappled coastal sky.

Within Chiba, an hour northeast of Tokyo, sits Terada Honke. The sake brewery has been operating here for more than three centuries and the facilities haven’t moved in its centuries-long lifespan. As you approach, columns of steam cook rice in large bamboo vats while linens dry in the warm summer air. Two chickens slowly explore the brewery’s grounds and a brewmaster’s dog rests in the shade next to a mini-truck loaded with rice seedlings.

Since the mid-century, many Japanese sake producers began to homogenize their products with the hopes of selling to a wider consumer base. They also adopted practices geared to mass-production — a process that left the sake market in Japan with plenty of safe and uninspired products. Counteracting the trend, Terada Honke looked to its roots for inspiration. It reestablished the Kimoto method as it primary process for making sake. The centuries-old process takes considerably longer than contemporary methods, but produces a sake that is generally richer and more complex.

Throughout Japan, tradition is found in the most obvious places — like Terada Honke — but it permeates even to the most unexpected — like the megalopolis of Tokyo. Like no other, Japanese culture emphasizes quality and attention to detail. In terms of product, they make some of the best in the world. When that product is also rooted in historical methods and practices, it becomes a distillation of the culture in material form.

Hours away on the coast, past crowds of surfers frothing for the next wave, the city of Ohara meets the ocean at a harbor filled with fishing boats. Early in the morning, the boats file out of the shallow, calm waters toward the deep ocean. Illuminated by floodlights, the fishermen prepare their ships for the morning’s catch. Before the workday has started, most of the boats have returned with fish and shellfish to sell to local purveyors.

The incredible variety of sea life brought in is not just an everyday fact for the denizens of Chiba; it’s a birthright. All of the different species of fish are known by sight, and the technique for preparing them as sashimi or for cooked dishes is ingrained in the prefecture’s heritage. Even cleaning the fishing nets in the early morning sun is a community event. Precision knife work, deboning, slicing, presenting — it’s all part of a larger history that is deeply tied to a respect for the ocean. “Japan is based so heavily around traditions and values and all the heritage of it,” said Patrick. “It definitely plays heavily on everyone who comes and experiences it. You can’t help but be affected by that quality.”

See more behind-the-scenes footage with the Gudausksas brothers and how these pro-surfers spend off-hours in Japan with Part Two of Surf Break.

This content is created and maintained by a third party, and imported onto this page to help users provide their email addresses. You may be able to find more information about this and similar content at piano.io
Advertisement - Continue Reading Below
More From Sponsored
The 10 Best Yoga Mats for 2020
Today in Gear: The New Seiko 5 Collection, the Best Coffee Makers for Camping & More
Advertisement - Continue Reading Below
Today’s Best Deals: An Easier Way to Buy an Engagement Ring, a Discounted Vibrating Foam Roller & More
Couple Lab-Grown Diamonds Make Shopping For An Engagement Ring Easy
The New Seiko 5 Sports Will Up Your Everyday Style
The First Analog FROGMAN From G-SHOCK Is A Big Leap Forward
Today in Gear: Custom Lab-Grown Diamond Rings, 10 Inexpensive but Functional Desks & More
Today’s Best Deals: An Excellent Tool for Sharpening Your Knives, Discounted Furniture Made in America & More
Snag This Knife Sharpener From Amazon’s Deal of The Day
Couple Lab-Grown Diamonds Will Elevate Your Proposal, Even During A Pandemic