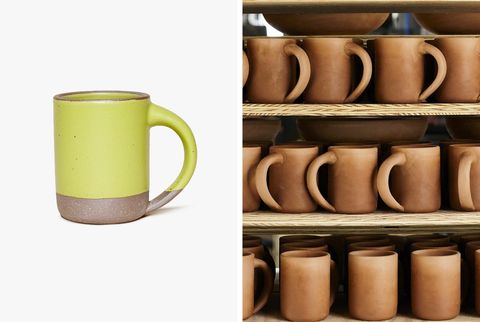 “What have we done?” Alex Matisse often asks his wife and business partner, Connie, at the end of a long day juggling parenting duties with the making of the “internet’s favorite” product.

The Matisses are cofounders of East Fork, a clay pottery company based in Asheville, North Carolina. In a journal entry on the company’s site titled “Big Feelings from the CEO,” Alex let the public know that he and his team are trying to make more of the coffee mug that’s always sold out.

Dubbed #TheMug by Instagram, East Fork’s coffee mug is a web phenomenon. Every Tuesday at noon, its web stock is refreshed and, within minutes, depleted. Why?

“When other companies in our cohort need more stock, they call up the factory they’re working with overseas and say, ‘Send us more, please.’ We’re making our own product five feet away from the desks we’re selling it from,” said Connie Matisse, who runs the creative marketing arm of the business. “No one on our [Creative Marketing team] has had any prior experience in marketing, but I think we’ve done a really good job figuring it out.”

The East Fork coffee mug frenzy is now an in-joke, with the company offering a consolation T-Shirt ($20) for those not able to secure one of its mugs.

The Mug starts as clay from a pugmill. It’s then cut into long pieces, placed in a mold for the first time, pressed and left to dry for a day. Handles, made from die casts, are pressed and cleaned up by hand and later applied to the mug by hand. The handled-mug dries for another day before its first firing, after which it’s glazed and partially waxed by hand. Another firing, quality control, sanding and touch-ups follow before it is ready for sale. Connie Matisse describes the production as a choreographed ballet, “or a Formula-1 pit crew.” All told, East Fork’s capacity is 450 mugs a week.

The stratospheric launch of its coffee mug came quickly. Tim McKeough included it in a guide to mugs in The New York Times, it was mentioned on the Food Network and, quickly after, the mug sold out. Other sites piled on, and the mug became the most-coveted piece of coffeeware on the internet.

East Fork realizes it might frustrate customers who aren’t able to purchase the mug whenever they wish, but the Mattisses are stubborn to compromise. Firmly planted in an actual artisanal production process while still appearing and operating as a modern direct-to-consumer company, Connie Matisse says they won’t sacrifice the artisan nature of their product and they won’t increase the price (the last price change was last summer, when The Mug dropped from $42 to $36).

In Alex Matisse’s open letter to those lusting over his mug, he writes “We are not the Warby Parker of pottery — as much as journalists like to lean on that line. We can’t flip a switch and make more overnight. All we can do is show up every day and try to make more than we did the day before.”

This content is created and maintained by a third party, and imported onto this page to help users provide their email addresses. You may be able to find more information about this and similar content at piano.io
Advertisement - Continue Reading Below
More From Coffee
The Best Instant Coffee for Camping
These Are the Only Coffee Makers You Should Buy
Advertisement - Continue Reading Below
Is a $300 Coffee Maker Better Than a $50 One?
7 Ways You’re Ruining Your Pour-Over Coffee
Oxo's Ridiculously Good Coffee Grinder Is on Sale
No One Is Impressed by Your Enormous Coffee Mug
A New Coffee Subscription Is Perfect for Camping
Is This the Keurig Killer We've Been Waiting For?
What's the Best Kind of Coffee for Cold Brew?
The Best Coffee Grinders You Can Buy in 2020