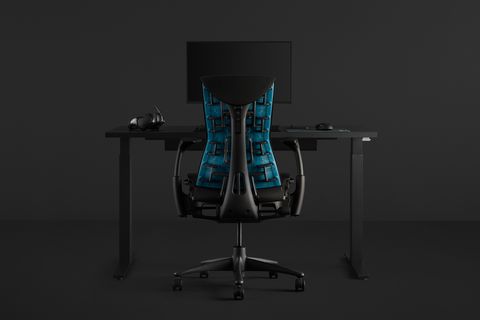 Collaborating with Logitech G, the gaming peripheral wing of the Swiss computer accessory and software company, the Herman Miller x Logitech G Embody Gaming Chair is available now. The chair (and the gaming desk and gaming monitor arms that released with it) is the company's first direct step into the world of video games, where colorful racing-style seats have dominated for over a decade now.

Together with Logitech G, Herman Miller conducted studies on professional gamers in the esports and streaming communities to identify problem areas in gaming-specific task seating. As it turned out, the problems were much the same as those with regular task seating — a lack of posture and circulation support, personalization options and body-friendly design elements. The brand's solution is a slightly suped-up version of the Embody Chair, a seat designed by Jeff Weber and the late design legend Bill Stumpf, chief designer of the Aeron chair, originally released in 2008.

The original Embody is the brand's highest-end office chair. The seat goes up and down and the seat pan can be expanded to suit longer-legged sitters. The arms go up and down and in and out, too. The back is designed to mimic a human's, with a central spine and a number of flexible "ribs" branching off of it. The ribs and a perforated plastic seat-back deliver flexible support regardless of how you're leaning. The chair also comes with a lengthy 12-year warranty and a hefty $1,595 price tag.

By and large, the gaming version of the chair is the same. Apart from the foam seat getting a cooling copper injection, the chief differences are aesthetic — it's all black with blue accents and a blue back, and the Logitech G "G" logo is stamped on it. It's also launching at a $1,495 retail price, $100 less than its predecessor.

The move into gaming is a departure for Herman Miller, a company known primarily as one of America's arbiters of original Mid-Century Modern furniture design. But, as evidenced by the ability to repackage a 12-year-old design to fit the needs of gamers, an enormous community primarily catered to by companies with lesser design and ergonomics credentials, it's not exactly out of their wheelhouse. And, frankly, thank goodness — the last thing gamers need is another winged pleather chair.