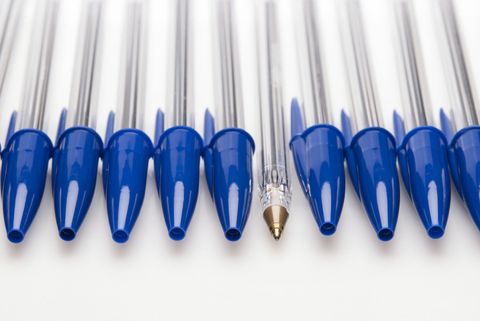 Welcome to Further Details, a series dedicated to ubiquitous but overlooked elements hidden on your favorite products. This week: the hole in the cap of your favorite cheap pen.

Pop open a fresh box of Bic’s famed Cristal pens and you’ll come face to face with a bunch of pen caps with holes in them. As an everyday function, the hole equalizes pressure so that uncapping and capping the pen isn’t a struggle. The hole’s other function is to save your life.

According to Iconic Designs: 50 Stories about 50 Things, Bic has been manufacturing vented pen caps since 1991 in an effort to reduce deaths by asphyxiation after accidental ingestion of the pen cap, particularly by children. Pen cap inhalation is a common issue with school-aged children, and the results can be deadly if not addressed immediately. The hole of the pen cap allows for airflow to continue even while lodged within the body. But the safety measure is only good for buying time until one can seek medical attention; one teenager in the UK died when he inhaled a pen cap and the cap’s vent became clogged.

Happy #BallPointPenDay! Simple, efficient and high-quality, the #BIC Cristal ballpoint pen continues to be loved nearly 70 years after it was first introduced.

Bic may have been the first in the implementation of the pen cap hole, but other pen manufacturers have since adopted the safety measure in accordance to the International Organization for Standardization (ISO), an independent organization that sets product standards for 164 countries. In 1993, the ISO released the safety standard ISO 11540, which dictates the design specifications of pen caps. These guidelines only apply to writing utensils that may be used by those aged 14 and younger — pen caps that are targeted towards adults, or are too large, aren’t subject to these measures. The specifications include the condition that pen caps be ventilated with an aperture that will allow someone choking on a pen cap to maintain somewhat regular breathing functions until medical help arrives.

The hole in the pen cap can literally be the difference between life and death if the cap is ingested. So the next time writer’s block hits, and the urge to chew your pen cap comes, maybe stick to chewing gum.