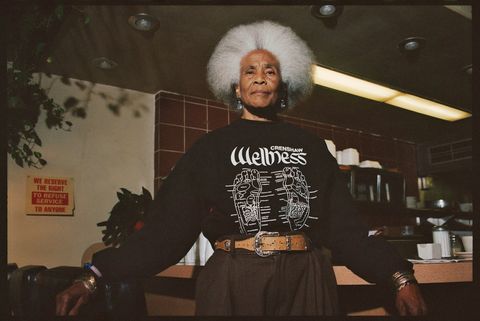 When designer Daniel Desure and artist Hassan Rahim founded Total Luxury Spa, it was a way for them to create more freely. Desure’s design studio, Commonwealth Projects, creates large-scale art projects based on a variety of disciplines, from architecture to graphic design. Creative as the work was, each project involved many different people, restricting Desure and Rahim’s ideas and impulses.

So, in 2012, the duo began Total Luxury Spa as a creative outlet to publish zines and collaborate more intimately with artists. They’d set up booths at art events like the LA Book Fair with Printed Matter, a non-profit organization with a mission to spread artist books to the public.

Desure spoke with Teen Vogue regarding the company’s name, saying that he and Rahim “wanted to work on something a bit more fun, with a free feeling. And the idea of a spa or a bathhouse is a space for rejuvenation; the space where you go to relax and regroup. It’s good for the mind, good for the body, and good for the soul. We liked the idea of creating a space where, instead of a steam room or a bathhouse, it’s the culture that rejuvenates you. So we started building the brand around that.”

Though the zines did well, TLS would soon pivot its focus. TLS zine releases were coupled with original merchandise, and that’s when the brand jumped from the zine’s pages onto t-shirts.

The duo actively avoids labeling themselves. “I think it’s everyone else’s job to label us,” Rahim says. But they are quick to note their inspirations. Los Angeles plays a significant role in the brand’s aesthetics, but even more so in its message. “Our references are never going to be made by an aesthetic decision,” Rahim said to i-D, “there’s always going to be a story behind it and when people connect with that, that’s who we want to rock our brand.”

Each release isn’t merely the result of the brand’s deft graphic design chops, but rather begins with the community. Its Crenshaw Wellness collection was a popular release which saw TLS give 50 percent of the proceeds to Mr. Wisdom, a beloved local chef. The act of giving back to the community isn’t just a one-off stunt related to a t-shirt release, however — it’s essential to the way the brand operates. Each product description highlights a local community member, sharing their story and pointing fans to their place of business.

While other companies crib from subcultures, Desure actively engages with those subcultures and contributes back to them. Tropics LA, for instance, is another project of Desure’s which started because of an encounter with a group of local skaters, who wanted to open a juice shop. Commonwealth Projects helped Tropics LA get its start and continues to use it as an avenue to serve the community through healthy food and weekly meditation sessions. “As a business owner, when we’re developing projects, it doesn’t just mean that we’re infusing ideas into other people’s projects,” Desure says. “It also means that we need to practice what we preach, and we need to create opportunities for the community.”

TLS is clearly inspired by the past, but they also look to the future. Like the spiritual jazz movement born from pioneers like Alice Coltrane and Sun Ra, TLS’s major themes include wellness, healing, meditation, space, community and Afrofuturism. “There were a lot of incredible groups that came out of Los Angeles, that were doing really interesting, progressive things back in the ’60s and ’70s,” Desure said to Teen Vogue “and that’s definitely where we pull inspiration from. Some of it is forward-facing and some of it is a nod to the past.” The graphics are psychedelic, vintage-tinged and colorful. Whether by some cosmic force, Desure and Rahim’s willing it into existence, inception, or all three, the collection is indeed infused with a sense of relaxation.

Their ideas have caught on beyond the locals, too. Not only is TLS stocked at some of the world’s best streetwear stores like Union and Slam Jam, but it’s been seen on celebs like Daniel Kaluuya, Kyrie Irving and Kelsey Lu. They’ve even caught the eye of it-designer Telfar Clemens.

Total Luxury Spa occupies an area of streetwear that few others do. They know that the community is the birth of local culture and they pay their respects, feeding a cyclical ecosystem that is at once part of the culture that it begets. By shedding light on the community and not the design of its products, Total Luxury Spa stays connected and plugs more people in. If you like the design, great.