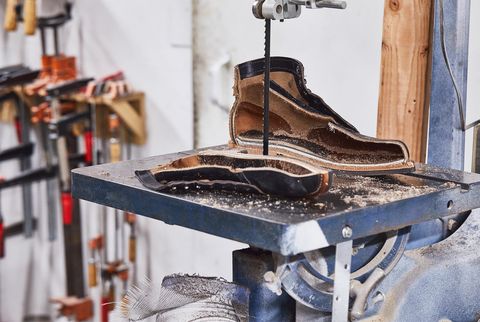 Frequently at Gear Patrol, we implore readers to invest in quality boots. We wax poetic about how a great pair will age: how it will develop a unique patina, how it will form to the wearer’s foot, how it can be resoled countless times. We talk about it like it’s a serious investment, not as a rhetorical exercise, because it actually is. Most quality boots cost hundreds of dollars and are designed to last for years.

When many brands or retailers describe expensive boots, they often rely on manufacturing processes as marketing terms. This is Goodyear welted, therefore, it is a quality product. Though construction processes undeniably have an effect on the quality of a boot, one method is not necessarily better than another. They have different purposes and features, resulting in boots appropriate for different situations. A problem arises when we stop equating a manufacturing term with its process and start equating it a value: good or bad. When this happens, a term can be wielded as a marketing force, confusing process with virtue.

So to clear some of the haze enveloping rhetoric and process, we decided to explore a few typical types of boot construction. Often, it’s difficult to picture how a boot is actually put together, where the stitches go and what you’re actually standing on. So we sourced prime examples of each type — Cemented, Blake/McKay, True Moccasin, Goodyear Welt and Stitchdown — from some of the top brands in the industry and asked Brooklyn furniture maker Asa Pingree to cut them in half. (Swipe through to the end of each slider below to watch him at work.)

Looking at their cross sections, we’re able to clearly see what components go into a pair of boots and how they are all connected. We can see why some construction styles take more time than others (and therefore cost more) and how some styles use more materials. Most importantly, in understanding how the upper, insole, midsole and outsole relate to each other, we can begin to see the values inherent in each construction method and how those might be relevant to our own lives.

Insole: The interior surface of the boot that comes in contact with the sole of your foot.
Last: The wood or plastic form used to create the shape of a boot.
Midsole: A structural layer of the boot that sits between the outsole and the insole.
Outsole: Sometimes just called the sole, this is the bottom surface of the boot that comes in contact with the ground.
Upper: The combination of parts of the boot’s top, including quarters (which wrap around the heel), vamp, tongue and saddle.
Vamp: A part of the upper that covers the instep of the foot and can extend over the toe in certain styles.
Welt: A narrow strip of leather on the exterior of the shoes that secures the midsole to the upper.

Blundstone Original 500 Boots: Cement construction is the fastest, most affordable method to attach an upper to a sole. Australian brand Blundstone makes what is regarded by many as one of the industry-leading cement construction boots. For its iconic Original 500 boot, the brand uses adhesive to glue the weather-proof oiled-leather upper to the slip-resistant polyurethane outsole. No welting is used in this style construction, so it’s not easy to re-sole the boots. But because they’re relatively easy to produce, they tend to be more affordable than boots made with other methods.

The cemented construction does allow Blundstone to integrate a number of comfort-based materials to the midsole. The boot features an SPS Max Comfort system made up of Poron XRD microcellular impact technology. This open cell, breathable foam material — positioned directly under the heel — combined with a cushioned midsole provides a high level of comfort from the first wear. A removable foam insole offers another small layer of padding. Which means you don’t have to spend weeks or months breaking them in.

Frye Chase Lace Up Boots: Blake/McKay construction is so named because it relies on a stitching machine invented in 1856 by Lyman Blake (the patent for this machine was later sold to Gordon McKay). The concept is straightforward: the upper is wrapped under the insole, and these two components are secured to the outsole with a single stitch. This produces a sleek shoe that can be re-soled, but is lighter and easier to produce than Goodyear-welted alternatives.

A variation of this style, called the Blake/Rapid Construction, is also commonly used. In this style, the upper and insole are Blake-stitched to a leather midsole, which is then rapid-stitched to the outsole. As opposed to traditional Blake/McKay construction, this style of construction is more weather-proof, less-flexible and more rugged (the exterior rapid stitching gives the boot a more substantial silhouette).

Frye’s Chase Lace Up boot features an Italian buffalo leather upper with a leather lining and leather insole. A foam midsole, which will eventually mold to the wearer’s foot, sits between the insole and outsole. This boot utilizes traditional Blake construction: a single stitch attaches the insole, foam midsole and outsole. The stitched welt on the exterior of the boot is aesthetic, attached to a strip of leather that forms a perimeter around the foam midsole. This makes for a flexible, comfortable boot out of the box.

Rancourt Harrison Boots: True Moccasin construction is an iteration of traditional indigenous footwear styles. A continuous piece of leather (the vamp) is wrapped around the sides and bottom of the boot, forming a shape akin to a hammock. This one-piece construction provides comfort unrivaled by other styles of construction. The vamp is then sewn to the rest of the upper and toe box and, in modern iterations, Blake-stitched to a midsole to which a more substantial outsole is attached.

The standard-bearer for this type of construction is Maine-based bootmaker Rancourt and Co. The brand’s Harrison Boot features an upper made from heavyweight Flit Kudu suede. The style includes a hand-sewn toe box, machine-stitched mudguard (reinforcing the vamp) and a leather lining. A padded insole sits beneath the heel and the vamp is Blake-stitched to a leather midsole. Attached to this, a Vibram 148 Kletterlift sole with a foam wedge midsole provides increased traction and comfort.

Wolverine Evans 1000 Mile Boots: In 1869, Charles Goodyear, Jr. invented a footwear-stitching machine that could produce durable shoes and boots that were easy to re-sole. The eponymously named Goodyear Welt Construction has become something of a gold standard in the boot world. For this style of construction, the bottom of the insole is prepared with a rib that runs along the contour of the foot (some brands cut and carve the insole while others attach a rib made from additional material). The machine then secures the insole rib and upper to a thin piece of leather encircling the outer forepart of the boot (the welt). An additional rapid stitch secures the welt and midsole to the outsole.

The Evans 1000 Mile Boot, made by Michigan-based brand Wolverine, is a classic example of a Goodyear-welted boot. The style features a Horween-leather upper, leather midsole and leather outsole, strengthened with a Vibram rubber forepart and heel. As with many Goodyear-welted boots, a cork filling sits between the insole and midsole which will mold to the wearer’s foot over time. Because of the additional welting and stitching, the boot is less flexible out of the box, but more durable and easier to repair after years of wear.

Viberg Service Boots: Stitchdown construction, as the name implies, features an upper stitched down to the midsole. One of the oldest construction methods still widely used, it was developed in Dutch South Africa. Canadian bootmaker Viberg is a strong proponent of this style of construction, showcased in the brand’s flagship Service Boot.

Designed in 1931 by Edwin Viberg, the style features a leather upper which is flanged outward and stitched to a substantial leather midsole. An additional rapid stitch secures the upper and midsole to a Dainite rubber outsole. On the interior, the boot’s leather lining is sandwiched between the hefty leather insole and midsole. Unlike other boots that use cork filler, Viberg’s boots are essentially stacked leather. This makes for a more substantial boot — it’s heavier and stiffer from the first wear and it will take longer to mold to the wearer’s foot. Also, a thicker heel-counter noticeably cups the wearer’s foot and provides more stability than other brands. When the boot does break in, the fit and longevity will be unmatched by other construction styles.

This content is created and maintained by a third party, and imported onto this page to help users provide their email addresses. You may be able to find more information about this and similar content at piano.io
Advertisement - Continue Reading Below
More From News & Product Releases
Keen Releases Jerry Garcia Masks, Sandals and Bags
The 10 Best Everyday Backpacks Under $100
Advertisement - Continue Reading Below
These New Shoes Are Like Spotify for Runners
Score this Classic Camp Stove at a Deep Discount
What You Should Get from Uniqlo U's New Collection
Trying to Win This Scout Helps Save Sick Kids
This Affordable Seiko Dive Watch Is 41% Off Today
Enter to Win This Rare BMW and Help a Great Museum
Innovative Outdoor Tech Makes This Bong Awesome
Some of Tumi's Best Suitcases Are Now on Sale