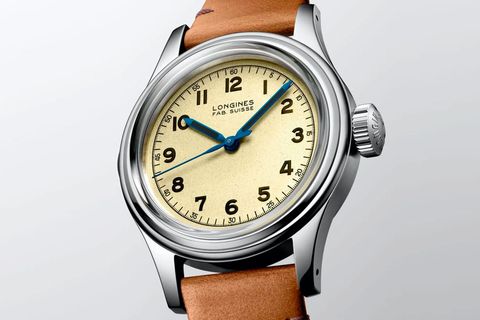 There are incredible bargains to be had on smaller watches with fascinating history if you can wrap your brain around the idea of a case size well below 40mm. One such watch (or, more accurately, two such watches) are Longines "tre/sei tacche" models — handwound models from the 1940s and 1950s that feature ~33mm cases and either a three or six-notched case back (hence their Italian nicknames). Some of these timepieces were purchased by military personnel during or after World War II, and there are countless variations available on the secondary market. One such variation, it turns out, was even issued to the French Marine Nationale in the late 1940s.

The reference 5774 featured a handwound 12.68N movement like many of the tre and sei tacche models, though its association with France's navy makes it unique, with prices commanding a premium over those of similar models without military provenance. Longines, on a roll from the past several years' worth of historical re-releases within its Heritage Collection, has seen fit to re-release this "MN" in modern guide, upgrading its case size to 38.5mm and fitting it with the ETA-based cal. L888.5 automatic movement, which features a 64-hour power reserve.

A speckled dial similar to that of the Longines Heritage Military — which inspired so much debate following its debut in 2018 — gives it a "faux patina" look, as if the watch were recently discovered after 70 years in a dusty safe in France. "Fab Suisse" graces the dial below the Longines wordmark as it did on the original watch, and dark Super-LumiNova has been used as a stand-in for radium lume on the Arabic indices and hands, which are blued. A domed sapphire crystal takes the place of the original plexiglass.

Flipping the watch over reveals a six-notched case back with "The Longines Heritage Military Marine Nationale" and the watch's reference and serial number, though this design could conceivably change before final production models hit the market. Water-resistant to 30m and shipping on a brown leather strap, the watch will carry a price of $2,950 upon its release in the fall.

Pencil hands, a stepped case, an oversized crown, a notched case back — all the hallmarks of classic 1940s Longines tool watch design are here, though it'll be up to you whether or not the new case size with its long lugs is your particular brand of vodka. With so many sei and tre tacche watches floating around the vintage market — though the supply has admittedly dried up as the years go by — the collector is somewhat spoiled for choice between vintage and modern examples.

Good luck getting your hand on an original, MN-issued watch, however. For that itch, there's the new Longines Heritage Military Marine Nationale.