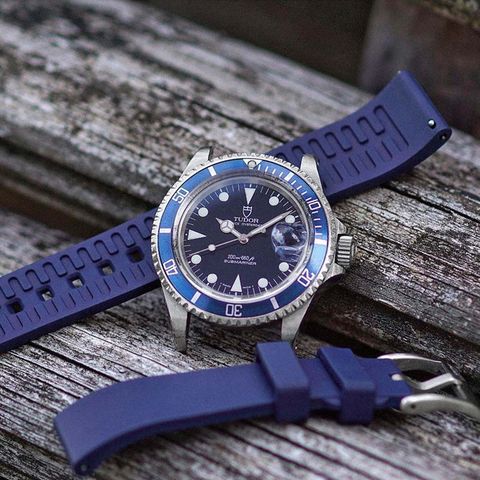 B and R Bands

There's nothing like seeing your favorite watch take on a whole new character with a simple change of its strap — but the strap changing itself can be an incredibly frustrating exercise. Flying spring bars, uncooperative end links, scratched lugs...even skilled and experienced strap-swappers can find themselves muttering expletives. Some watch straps, however, feature a clever little system that makes all the fuss go way.

Variously called things like "quick-change" or "quick-release," this type of strap features a spring bar with a tiny knob protruding through a slot on the underside of the strap. You simply pull it with a fingertip in order to retract the spring-loaded bar and pop it into or out of the lugs' holes. It's absurdly simple and takes all of one second.

In contrast, the "traditional" method of changing straps typically involves hazardously poking, digging and prying around your beloved watch with metal tools. Depending on the watch and the band, it can be anywhere from relatively easy to a minor ordeal. It's a basic skill you want to have, for sure, but this in-depth strap changing explainer is a good illustration of just how involved it can be.

The quick-change strap system makes the old way seem downright primitive. There are fancy tools meant specifically for the job, highly engineered solutions for specially-made straps and even designs built into the watch's lugs themselves. With all the clever design that's gone into wristwatches over the decades, it's a wonder that only recently has this simple solution begun to catch on.

The quick-release system is clearly superior, so why doesn't every strap feature it? You can put to rest any notion that these are less secure than the standard variety: with the knobs on the underside of the straps, there's little to no possibility they'll catch on something and accidentally disengage your watch from its strap while on the wrist. The tabs themselves cause zero discomfort. As many respected Swiss watch brands have begun offering straps as standard issue with watches at retail, it's hopefully just a matter of time before the system is more widely adopted.

In the meantime, here are a few straps and bracelets you can shop that offer the quick change/release feature:

Flatwater Elite Silicone
Barton amazon.com
$20.00
Buy Now
Watch Gecko
Merriott Milanese Mesh
Watch Gecko watchgecko.com
£35.99
Buy Now
B&R Bands
Navy FKM Rubber
B&R Bands bandrbands.com
$44.99
Buy Now
Molequin
Hunter Green
Molequin molequin.com
€105.00
Buy Now
Shinola
20mm Black Genuine Alligator
Shinola shinola.com
$225.00
Buy Now
This content is created and maintained by a third party, and imported onto this page to help users provide their email addresses. You may be able to find more information about this and similar content at piano.io
Advertisement - Continue Reading Below
More From Watch Accessories
Get This Beautiful Watch Winder for 57% Off
A Great Way to Store Your Watches, Knives and EDC
Advertisement - Continue Reading Below
A Short Buying Guide to the New Apple Watch Bands
Check Out This Unique Tactical Watch Strap Design
Need a Watch Winder? This One Is Hugely Discounted
The Best Ways to Travel With Your Watches
All About Watch Strap Buckles and Clasps
A Bunch of Luxury Watch Winders Are On Sale
Store Your Watches in These Beautiful Watch Boxes
How to Store a Watch Collection