Today's Top Stories
1
Way Day 2020: Your Guide to Wayfair's Biggest Sale
2
Gear Patrol Magazine: The Winter Preview
3
How Does Apple Fitness+ Stack Up to Competition?
4
Why a Pair of Patagonia Shorts Went Viral
5
The 9 Best Commuter Bikes for Every Road and Rider 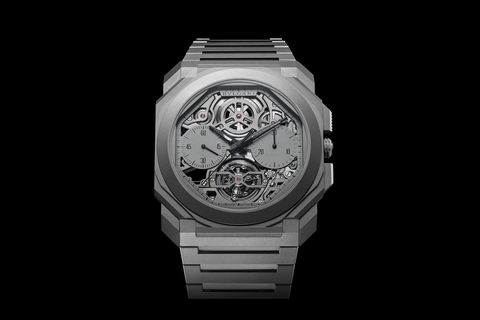 Bulgari's Octo Finissimo line has accomplished a remarkable feat: since its debut in 2014, it's broken six world records, beginning with that of the thinnest handwound flying tourbillon movement in the world. Now, the famed Roman luxury house has turned its sights on a rare compilation, and produced the thinnest watch of its kind to house it.

The new Octo Finissimo Tourbillon Chronograph Skeleton Automatic features an automatic, in-house movement combining a monopusher chronograph and a tourbillon. Housed within the Octo Finissmo line's remarkably cool sandblasted, grade 5 titanium case, it's a striking watch with a fully skeletonized dial that reveals the complicated movement beneath. Though the case does indeed feature two pushers rather than one, all chronograph functions are actually controlled with the 2 o'clock pusher, while the 4 o'clock pusher controls the crown functions (one position for hand-winding the movement, and another for setting the time.)

The chronograph layout takes the form of a fairly typical dual-register design: a 30-minute counter at 3 o'clock and a running seconds at 9'o'clock, while the movement's tourbillon is visible at 6 o'clock. It's not the most legible dial in the world, considering everything is rendered in grey surfaces, but legibility is probably not amongst your chief concerns if you're buying a $142,000, record-breaking piece of haute horlogerie.

The watch's titanium case measures 42mm wide and a stunning 7.4mm thick despite the movement's complications. The ultrathin movement itself, which Bulgari has dubbed the cal. BVL 388, features a 52-hour power reserve and measures a mere 3.5mm thick. A matching sandblasted titanium bracelet with folding buckle completes the package.

While the Octo Finissimo Tourbillon Chronograph Skeleton Automatic, at $142,000, certainly doesn't exist within the realm of affordability for most watch buyers, we plebeians aren't the target audience here, and can safely admire from afar. Only fifty of these wild watches are being produced, and you can be sure they'll find their way to dedicated Bulgari collectors and admirers of ultra-high end, complicated watchmaking.

This content is created and maintained by a third party, and imported onto this page to help users provide their email addresses. You may be able to find more information about this and similar content at piano.io
Advertisement - Continue Reading Below
More From Automatic Watches
This Affordable Seiko Dive Watch Is 44% Off Today
This New Dive Watch Features a '70s-Inspired Color
Advertisement - Continue Reading Below
Oris Is Supporting a Unique Scuba Diving Mission
The Best New Luxury Sport Watches
Two Of Our Favorite Affordable Watches Got Updates
This Brand Is Bringing Back Its Vintage Watches
Check Out This Cool Bronze Pilot's Watch for $800
This Man Makes a Living Selling Vintage Ads
Three Cheaper Alternatives to the Rolex Submariner
This Watch Celebrates Grand Seiko's 60th Birthday