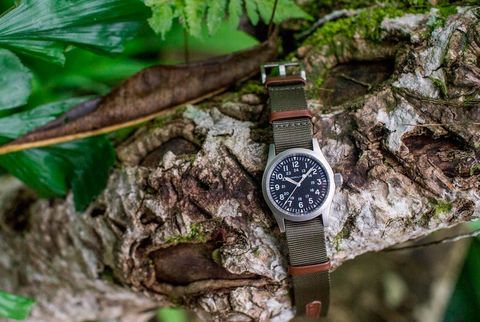 In the past 20 years or so, watches have gotten big. Really big. Some attribute the rise of the oversized watch to Sylvester Stallone and the revival of Panerai in the ’90s, but big luxury brands like IWC, Breitling, Omega and even Rolex have followed suit with watches far exceeding 40mm in diameter. A 2011 story in The New York Times suggested it pretty much comes down to good ol’-fashioned exhibitionism. Why spend big money on a new luxury watch if no one will notice it? “In an age when cell phones have largely eliminated the need for a timepiece, the monster wristwatch serves another purpose, as a holdout of permissibly conspicuous consumption,” wrote Guy Trebay.

In recent years, though, there’s been some self-correcting in the industry, and brands have begun to add smaller and smaller offerings to their portfolios. This, it seems, is a result of a booming vintage industry, and a focus on vintage-inspired models that better replicate their 20th-century forebearers, which mostly hung around the 34 to 36mm in size. A few years ago it was difficult to find a good looking watch that came in under 38mm, but today we’re practically swimming in them. That’s good news for vintage watch lovers, as well as men and women who simply prefer not to strap a dinner plate to their wrists.

This diver is a smaller iteration of the dirt-cheap SKX-series dive watch Seiko has been selling for years. It has the same look, same automatic movement and same 200-meter depth rating as its bigger brothers, but at 38mm it’s a solid 4mm in diameter smaller, a rarity for modern dive watches.
Movement: Seiko 7S26 automatic
Case Diameter: 38mm
Water Resistance: 200m

Hamilton’s new Khaki Field Mechanical is an homage to the MIL-W-3818 the brand made during the ’60s. It’s one thing to look like that watch, but the Khaki feels like a classic field watch, too. It does this by using an old-school, hand-winding movement as well as a relatively small 38mm by 9.5mm case — bigger than the original, but still decidedly small today.
Movement: ETA 2801-2 hand-winding
Case Diameter: 38mm
Water Resistance: 50m

Based on a funky reference from 1979, this Commander reissue from Mido is a super-accurate recreation of the original. It has a gradient dial with sunray finishing, as well as an integrated Milanese strap. And of course, Mido went to the effort of keeping the case size to a very period-correct 37mm.
Movement: ETA 2836-2 automatic
Case Diameter: 37mm
Water Resistance: 50m

We’ve written much about the new 1926 collection since its debut at Baselworld this year (mostly its awesome honeycomb dial), but one of the most exciting aspects is that it’s available as a 36mm watch (three other sizes are available as well). That puts it squarely in the size range of the early Tudor Oyster Prince models of the ’50s and ’60s, making it feel even more accurate to the original watches the 1926 is referencing.
Movement: ETA 2824-2 automatic
Case Diameter: 36mm
Water Resistance: 100m

Oris updated its Divers Sixty-Five lineup (as it does every year) with a new iteration featuring a bronze bezel. It also made the watch available in tow sizes: 40mm and 36mm. The latter, of course, is almost unprecedented for a modern dive watch, but it’s on par with the size of early dive watches from the ’50s and ’60s.
Movement: Sellita SW200-1 automatic
Case Diameter: 36mm
Water Resistance: 100m

The original Nomos watches of the early ’90s like the Orion are modern classics, thanks to an incredibly simple aesthetic. As part of that less-is-more ethos, the Orion is just 35mm because, well, anything more would be gratuitous. And thanks to its thin bezel and larger dial, it does wear bigger than its scant diameter would suggest.
Movement: Nomos Alpha hand-winding
Case Diameter: 35mm
Water Resistance: 30m

The Mark XVIII is a great homage to the brand’s iconic Mark XI pilot watch, but at 40mm it, like many vintage tributes, suffers from ballooning in size from the original. Given that, the smaller, but otherwise almost identical Pilot’s Watch Automatic 36mm might be a better homage to the original IWC Mark XI, which was the same size.
Movement: Sellita SW300-1 automatic
Case Diameter: 36mm
Water Resistance: 60m

Historically, Breitling has made some pretty big, complex-looking watches, but this year, the brand seems to want to offer some toned-down options. Exemplary of that is the introduction of the time-only Navitimer 1, which has the same basic look of the classic Navitimer chronograph, but in a smaller, simpler package.
Movement: ETA 2824-2 automatic
Case Diameter: 38mm
Water Resistance: 30m

For a brand so intertwined with the oversized watch movement, a 38mm Panerai comes as a surprise (it is, after all, the smallest watch produced by the brand). Still, it’s a great option for those who want that classic ’40s Panerai design but have smaller wrists. This being part of the brand’s Due series, it’s also thin at just 11.2mm thick and is powered by a slim automatic movement with a micro-rotor.
Movement: Panerai OP XXXIV automatic
Case Diameter: 38mm
Water Resistance: 30m

Zenith’s El Primero chronograph lineup is full of many variants, some excellent, some questionable. The Heritage 146 is the former, rocking a small (especially for an automatic chronograph) 38mm case that’s based on the original El Primero case design from 1969. That’s paired with a super-clean, super-retro dial design that makes this a well-rounded timekeeping throwback.
Movement: Zenith El Primero 4069 automatic
Case Diameter: 38mm
Water Resistance: 100m