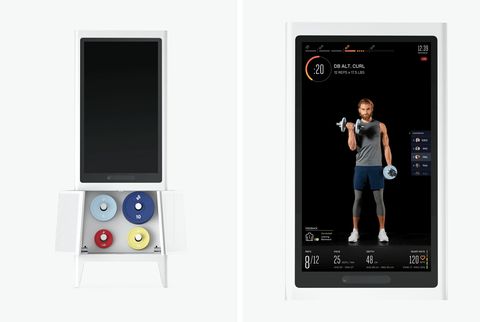 When the fitness app Strava released findings from its 2019 user data, it revealed that among cyclists, those who rode in groups tended to start earlier and cover nearly twice the distance of solo riders. There is, it would seem, motivation in numbers. Maybe that’s obvious, and it certainly explains why, in 2020, there’s a group fitness class for every pursuit, from indoor running to prison-style workouts.

At the same time, there’s been a recent boom in tech-enabled at-home fitness machines that simulate working out with an instructor (and sometimes a whole group). The best-known example is Peloton, and the newest is Tempo. Unlike Peloton’s bike, Tempo is a piece of furniture, not a fitness machine; it has four legs, a cabinet and a screen. But it also has 3D sensors that watch your form and count your reps, providing insight on how you can improve as you go. But Tempo isn’t just a thing, it’s a place where, as its site promises, “the guidance of a personal trainer meets the energy of a group fitness class.”

Another apparatus called Mirror makes a similar case for virtual immersion in a coached workout. And, as a screen that mounts to a wall, Mirror is even less obtrusive. A third machine called Tonal also is a wall-mounted screen but includes folding arms that slide, pivot and work with various handles and bars for different moves (an AI coach is present here too).

In a way, Tempo is simpler than its competitors, and thus more like the barebones home gym setup — it might include a few dumbbells and a bench — that we’re all used to. But it looks better, and it’s more organized; its bars hang out on its backside, and its weights store neatly inside.

And yes, there are classes. And there’s a social leaderboard where points are awarded for reps and rescinded for bad form. You can compete against friends, or the wider Tempo community and fitness introverts can also set it to private. It’s much like Strava’s system, but the question remains: Is a virtual coach, or group, as motivating as a real one?

This content is created and maintained by a third party, and imported onto this page to help users provide their email addresses. You may be able to find more information about this and similar content at piano.io
Advertisement - Continue Reading Below
More From News & Product Releases
Need a Watch Winder? This One Is Hugely Discounted
TAG Heuer's New Carrera Revamps a Classic Watch
Advertisement - Continue Reading Below
How Does Apple Fitness+ Stack Up to Competition?
Why a Pair of Patagonia Shorts Went Viral
Special Ops Members Helped Make These Gym Shorts
One of the Best Travel Mugs Just Got a Big Upgrade
Check Out Everlane's New Affordable Sneakers
This Japanese Brand Has a Fresh Take on Mattresses
Save on the Perfect Portable Fire Pit
Patagonia’s Camp Blanket Is Perfect for Home