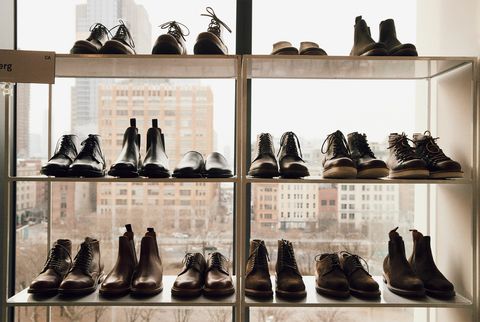 Waiting is hard. While I hit the pavement of the trade show floors and put a microscope to the runways in search of up-and-coming trends because it’s my job, the real reason I scour is that I just can’t wait to see what’s new. This season at New York’s Fall/Winter 2020 trade shows, I saw some things old, some things new, some things upcycled and some things indigo. Among the sea of goods taking up the booths, there were plenty of shoes to ogle.

Here are the just some of the shoes you’ll be seeing on feet in the not-too-distant future.

Yogi footwear was a product of the ’90s following in the footsteps of famed yoga instructor-turned-shoe-designer Anna Kelso. Noted for producing shoes with soles that mimicked walking in sand, her brand, Earth Shoes was a hit among the granola and hippie crowd. It was passed around to different parent companies before relaunching in 2016 and is stocked in highly-respected independent boutiques like C’H’C’M, Oi Polloi and more, with collaborations with respected brands.

When Viberg launched their most recent drop of footwear, the standout among them was its mules. This time, the mule is getting a new chassis in a variety of leathers including this one from C.F. Stead leather dubbed ‘Winter Smoke’.

Feit’s hiker boots, at the precise angle and with a negligible amount of force, are lethal projectiles. They’re also incredibly cool. This season saw the deadly duds with a slick leather jacket.

I always expect to see some of the craziest footwear at the Yuketen booth. Expectations were met. Known for crafting a wide range of footwear spanning from beaver fur moccasins to crepe sole loafers and chunky Americana-inspired boots, the brand consistently draws retail buyers and legions of fans thanks to the discerning eye of its designer, Yuki Matsuda. Among the ranks in the parade of footwear were boots with a capital ‘H’ hairy suede and bandana printed leather, work sneakers straight from the ’70s and more.

Reproduction of Found specializes in replicas and riffs of military sneakers from around the world. German Army Trainers and Swedish military sneakers are normal fare for the brand, but I was drawn to some of the tech-leaning Russian hiking sneakers as well as the more formal South African derbies.

Known for Maine-friendly moccasins and boat shoes, Sebago is shifting the sails a bit and getting funky. Among the lot were lugged loafers in classic leathers as well as eye-catching animal prints, and moccasins done up in bright color block renditions.

Related article
The Style Trends to Watch for in 2020, According to the Insiders

This content is created and maintained by a third party, and imported onto this page to help users provide their email addresses. You may be able to find more information about this and similar content at piano.io
Advertisement - Continue Reading Below
More From Style
Keen Releases Jerry Garcia Masks, Sandals and Bags
Western Boots That Won't Break the Bank
Advertisement - Continue Reading Below
These Pants Seamlessly Blend Style and Comfort
Presented by
Lululemon
The 8 Best Engineer Boots for Men
This Barbour Collaboration Is Its Coolest Yet
This Travel Bag Is Essentially Mary Poppins' Purse
The 12 Best Jeans for Men
15 Great Fall-Ready Sweaters for Under $150
The Best Sneakers You Can Buy Under $50
What You Should Get from Uniqlo U's New Collection