Today's Top Stories
1
Way Day 2020: Your Guide to Wayfair's Biggest Sale
2
Why a Pair of Patagonia Shorts Went Viral
3
5 Things to Know About Driving an Old VW Bus
4
How Does Apple Fitness+ Stack Up to Competition?
5
The 9 Best Commuter Bikes for Every Road and Rider 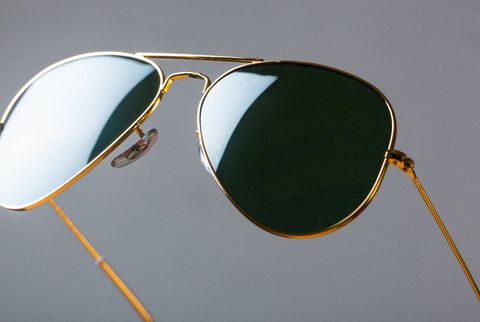 Welcome to Further Details, a series dedicated to ubiquitous but overlooked elements hidden on your favorite products. This week: the green lenses in aviator sunglasses.

Aviator sunglasses are an iconic eyewear style, first used by military pilots in the 1930s and in WWII before making their way to the masses. The style has seen countless iterations in recent decades, but one detail remains consistent for many — dark green lenses. As you might guess, the color choice isn’t just cosmetic. But before we explain that, we have to go to the beginning of aviator sunglasses themselves.

The aviator sunglasses we’re familiar with today were first developed in the 1930s by Bausch & Lomb. Prior to this, pilots wore goggles to protect their eyes in the air, where high altitudes introduced several optical dangers. Aside from the glaring sun, sub-zero temperatures also posed a threat. Tinted goggles were meant to protect pilots from both of these.

But, a major issue with these goggles was fog. Temperature differences between the air within the goggles and outside of the goggles often caused the lenses to fog up, obscuring the pilot’s view. The problem would be exacerbated if a pilot decided to doff their goggles and expose themselves to the blinding sun or the extreme cold. Such was the case with pilot Shorty Schroeder who’s eyeballs froze just minutes after he took off his goggles during a record-breaking 33,000-foot high flight. Luckily, somehow, he was able to land the plane safely. His friend, John Macready helped him out of the plane and would attempt to break his record just a month later — in the same plane, no less.

Macready’s flight was a success, though he found that pilot goggles were insufficient in blocking light at such high altitudes. So, he turned to Bausch & Lomb to develop a better solution. What they came up with was a lightweight metal frame with teardrop lenses which helped provide coverage when looking below. But perhaps the most vital detail was the lenses themselves. Rather than a neutral grey tint, the lenses were actually dark green. This particular color choice was functional as the green tint helped cut out blue light, a significant issue for pilots flying above the cloud line. Not only that, but green lenses tend to reduce glare while also improving sharpness and contrast.

The sunglasses were an immediate success and made their way through the military before eventually hitting the civilian scene. Bausch & Lomb dubbed the sunnies Ray-Bans, which would go on to be its own pretty successful brand.

Now, the green lenses used so frequently in aviators have a specific name: G-15. They allow only 15 percent of visible light through (hence the 15), and have high visual acuity, factors that made them an industry standard for decades. Subsequent versions of this lens include a G-31 and even a G-50, though the de facto green lens of most sunglasses is the G-15. Other companies have made their own versions of the G-15 lens, each with the same intended purpose as the original. While Bausch & Lomb no longer exists and you may not be a pilot, the invention continues to serve its purpose, both in the skies and on the streets.

Related article
Why There's a Loop on the Back of Your Shirt
This content is created and maintained by a third party, and imported onto this page to help users provide their email addresses. You may be able to find more information about this and similar content at piano.io
Advertisement - Continue Reading Below
More From Further Details
The Truth About the Apple Keyboard's Weird Symbol
What the Hell Is Selvedge and Why's It a Big Deal?
Advertisement - Continue Reading Below
Ever Wonder What Sport Mode Really Does?
What's the Ring on the Bottom of Your Skillet For?
Your Button-Up Shirt Has a Weird, Sideways Detail
Why There's a Loop on the Back of Your Shirt
Why Are So Many Door Knobs Made of Brass?
This Is What the Rings on Headphone Plugs Are For
What Do the Characters on Your Pocket Knife Mean?
Here's Why Your Car’s Shifter Goes P-R-N-D