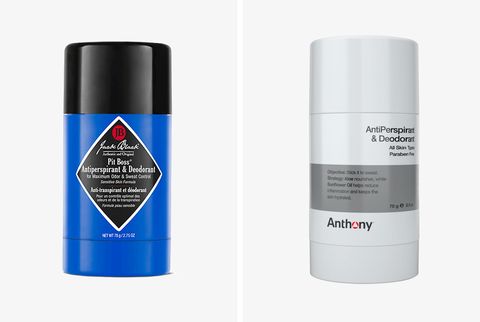 The conversation around deodorant has largely steered itself towards natural products. It’s great to see consumers being so conscious of the ingredients in their grooming regimen, especially since the long-term effects of aluminum — the key ingredient used in antiperspirants — are still somewhat nebulous.

Currently, the various studies on aluminum all contradict and negate one another. Some say excessive exposure causes Alzheimer’s, while others claim this is hullabaloo when considering the light-dose application of deodorants. Without conclusive evidence on the matter, aluminum antiperspirants are still widely sold. And like many products on the market, they are effective at the job they set out to do.

That’s why we still find value in touting antiperspirants. Until there is conclusive evidence that sways us one way or the other, we say this: Buy antiperspirants if you absolutely need them. They work. Some people who experience non-stop sweating (diagnosed as hyperhidrosis) will swear by antiperspirants since they allow these individuals to go about their day without swimming in their own body’s soup.

Here are 11 antiperspirants we love, some of which offer 72-hour protection against odor and sweat, and others that are intentionally milder. See which one suits your sweat-stopping needs.

Like the rest of Kiehl’s Body Fuel line, this glide-on antiperspirant and deodorant invigorates thanks to the inclusion of caffeine. It further nourishes and purifies the skin with zinc and vitamin C, and provides a full 48 hours of coverage against both smells and sweats.

A 24-hour formula that celebrates its mildness, this antiperspirant neutralizes wetness without stopping the body’s natural sweat cycles. In other words, it works by minimizing bacterial growth, but it doesn’t unnaturally transform your pits into an bone-dry Atacaman abyss.

In addition to all-day coverage against odor and sweat, Jack Black’s roll-on antiperspirant utilizes Vitamin E and aloe juice to keep skin soft, calm and shielded against environmental toxins. You may have to apply this one twice as often as the competition (an extra application in the evening, if you’re hitting the gym or the dance floor), but that doesn’t make it inferior; in fact, it’s a matter of preference for how potent you want your antiperspirant to be.

Aloe and sunflower seed oil combat inflammation and dryness in Anthony’s deodorant and antiperspirant roll-on. Like Jack Black’s formula, it’s less clinical and lasting than the low-cost competition. However, it’s every bit as effective when used daily, sometimes twice. Plus, it ensures a double-down on the deodorizing effects of these products. Don’t forget that an antiperspirant isn’t always a deodorant, and the ones you have to reapply more frequently will do a better job at neutralizing both odor and sweat, as opposed to just sweat.

With active ingredient aluminum sesquichlorohydrate, this lotion stops palmar and plantar hyperhidrosis (that is, on hands and feet). This prevents you from soaking in your own sweat all day, or from swapping soggy handshakes at work or over drinks. It’s not a days-long fix like lots of the other antiperspirants on this list; but it’s great to apply as needed, and should last a few hours, assuming you don’t thoroughly wash your hands. It’s also a good way to prevent excessive foot odor if that’s something you’re eager to nix.

If your sweaty situation is exactly that — a full-on situation — then you should talk to your doctor about using clinical-strength antiperspirants. Typically they will recommend one with aluminum chloride, as opposed to the traditional aluminum zirconium. That’s what Certain Dri’s formula includes, and it promises 72-hour sweat coverage for even the most hyperactive hyperhidrosis.

Though its branding has been updated, this is probably the antiperspirant you used when you went through puberty. And it works just as well today as it did during your awkward years. It gives you 24-hour odor and sweat protection with a light lemon-lime freshness, which pairs well with Old Spice’s similarly scented body wash.

With 48-hour sweat and deodorizing coverage, this spray-on deodorant also touts Dove’s signature moisturizing powers. A quarter of the formula is designated for keeping skin hydrated and cool, which is reassuring given the sensitivity of the under-arms. The clean scent is subtle enough for that just-showered freshness, but not so overwhelming that it competes with your fragrance of choice. Of the aerosol options and drugstore brands, this is one of your best bets.

This two-in-one antiperspirant and deodorant combats excessive sweating and major funk for a combined protection of 24 hours. Thanks to Helmm's award-winning perfumer, each available scent smells as upgraded as it looks and uses premium essential oils. And, the refillable packaging is made to cut down on plastic.

ZeroSweat's unique aluminum solution has been lauded by above-average sweaters thanks to its strong aluminum chlorate formula which absorbs into the sweat glands themselves to stop sweating. It's so effective that just one application will stop sweating for seven days. While the original formula remains its most popular, its other, gentler version contains aloe and chamomile to reduce skin irritation.

This clinical-strength formula comes in the form of a skin-absorbing lotion that goes on smooth without a greasy feel. It's packed with skin-moisturizing ingredients as well as eucalyptus which not only helps produce ceramides which keep your skin from drying out, but also add a fresh scent.