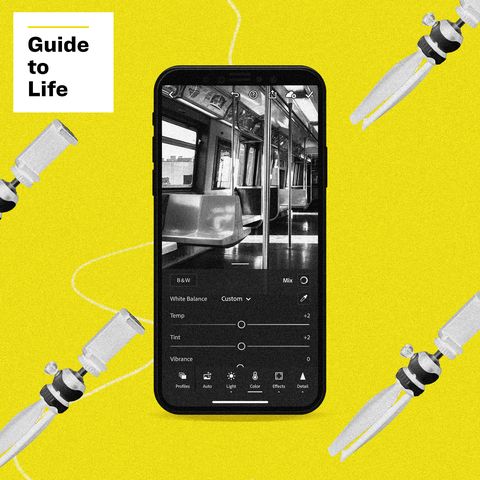 When it comes to making a really stellar photograph, taking it is only half the battle. But out on the go, you don't have the time or gear to really dig into an edit to make your prized shot pop. For those times, and when waiting just won't cut it, it's good to have your wits about you to make an edit on the go. Here's what you need to know to master the art.

Edit your shot before you hit the shutter

Whether you are using a DSLR or just your phone, the best chance you have to edit your picture is before you hit the shutter button. You can save yourself a lot of time and trouble by taking a few extra seconds to make sure the framing of your shot is just right.

Checking your view finder for awkward clutter you can remove by repositioning is much easier than editing unwanted details out later, especially on a phone. And taking a few extra shots with different points of focus will give you a selection of images to choose from that no editing software can ever provide in post.

Make sure you have a hi-res shot to edit

Editing can be powerful, but you need good input to ensure good output. So before you start snapping split second shots, make sure you'll be getting the highest quality files possible. On mirrorless cameras and DSLRs, this means digging into your settings to make sure you are shooting in RAW -- large files that that are especially suitable for editing -- in addition to smaller, less malleable JPEGs.

This same rule applies for smartphones, though not every phone can produce RAW files out of the box. Many Android phones with higher-end cameras, like the Samsung Galaxy S20, will have an option buried deep in their settings that generally defaults to "off" because RAW files are large and unnecessary unless you want to edit. So dig around and enable such a setting if you can find it, but beware your phone may fill up fast.

For phones that don't have this option built-in, which includes iPhones, there are alternatives. Some apps, like Adobe's Lightroom Mobile, can take over for you phone's default camera and capture RAWs for you. More on that in a second.

If you're shooting with your phone, the easiest way to make quick and dirty edits is with the tools that are already on your phone. They tend to vary from device to device, so make sure you familiarize yourself ahead of a shooting session.

Apple's built-in editing tools are by far the gold standard of default apps, with the ability to adjust everything from shadows to highlights to sharpness.

But for speedy edits of a photo you're already fond of, you'll rarely need more than the basics: contrast, saturation, and brightness or exposure. To quickly take a shot over the edge from good into great, a general rule of thumb is to pump up the contrast and saturation to where it feels right, and then just dial it back just a tad for a picture that pops but doesn't look unreal. It's an adjustment virtually every camera app can make, and for the most part all you need.

Pre-fab filters and auto-optimization are easy and tempting to but generally best to avoid. At best they make your photo look better, but not in a way that you'll be able to replicate on purpose. At worse, they produce a very artificial-looking result.

Break out the big guns with a dedicated editing app

No mobile device will replicate the editing power of a computer, but a few apps actually come pretty close! A terrific standalone option is Google's Snapseed (Android, iOS). Completely free, it boasts some advanced editing and cleanup features like a healing brush that can help you remove unwanted clutter from your shot, and perspective tools that can more fundamentally adjust the composition of your shot. This, in combination with the ability to edit RAW photos whether you took them with your phone or uploaded them directly from a DSLR, makes it an excellent one-stop-shop for anyone looking to take social media shots to the next level.

For photographers who already put in plenty of time in Lightroom or Photoshop on their computers, Adobe's mobile offerings (Android, iOS) are a potentially even more appealing option, though the upsides don't come for free. RAW editing, healing brushes and perspective correction, while free with Snapseed, are behind Adobe's Creative Cloud subscription for Lightroom.

But Adobe's $10 per month photography plans also include Lightroom and Photoshop on desktop, the ability to share RAW files between desktop and mobile devices in the cloud and the ability to shoot RAW photos directly through the Lightroom mobile app -- a killer for phones that don't support that capability natively. Yes, it's pricey, but it's not just an app. It's an entire workflow. And you can't really match that; so long as it's what you want.

The first-ever 2021 Lexus LC convertible is the pinnacle of luxury and performance. As you press the accelerator, the notes from its thunderous V8 engine fill the cabin — even with the top down — while wind is engineered away. But while every surface you touch is wrapped in luxury, performance is undeniably at its core, with real-time suspension damping, a strengthened chassis and overall lighter weight — it truly is without compromise.

This content is created and maintained by a third party, and imported onto this page to help users provide their email addresses. You may be able to find more information about this and similar content at piano.io
Advertisement - Continue Reading Below
More From Cameras & Photography
24 Great Vintage Cameras You Can Still Buy
The Best Compact Cameras to Buy in 2020
Advertisement - Continue Reading Below
Olympus Is Done With Cameras
Dad Into Photography? Leica’s Black-and-White Digital Camera Is More Affordable Than Ever
This $50 Camera Changed My Photography Forever
The Olympus E-M1 III Is the Perfect Amount of Camera and Not an Ounce More
The Handy Camera Trick That Has Saved My Ass So Many Times
The Best Smart Home Cameras of 2020
Turn Your Canon DSLR or Mirrorless Camera Into the Highest-Quality Webcam In the Chat
3 Excellent Photography Classes That You Can Now Take for Free