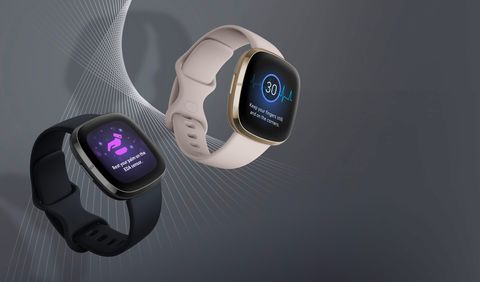 Fitbit just announced its new line of wearables, and the Sense ($329), its brand-new flagship smartwatch, is the pick of the litter. It's designed to go toe-to-toe with the Apple Watch and Samsung's new Galaxy Watch 3, for a lower price.

The Sense is a brand-new smartwatch in name, but it's really taking the place of the Fitbit Ionic in the company's smartwatch lineup. It also looks very similar to the Versa 3, opting for its curved edges and compact design instead the Ionic's larger, squared-off display. Both have a beautiful OLED display, a built-in GPS, a dedicated heart rate sensor and a 6-day battery life. The big reason to get the Sense, however, is if you want to take advantage of its impressive health features.

The Sense has three brand-new sensors, an ECG, an EDA and a skin temperature sensor. The ECG (or electrocardiogram) is something it shares with both the latest Apple Watch and Samsung Galaxy Watch 3, and which allows it to scan your heart rate and potentially give you an early detection of atrial fibrillation. However, the Sense's ECG is still pending FDA approval.

The EDA (or electrodermal activity) is another new sensor and it's exciting because it makes the Sense unique from the Apple Watch and Samsung Galaxy Watch 3. The EDA sensor can detect small electrical changes on your skin, which can indicate your body’s response to stress. If the smartwatch detects a high level of stress, it will let you know and give you tips to reduce it. Whether that actually matches up with what you experience as stress is an open question.

And finally, there's the new skin temperature sensor, which can track your skin temperature throughout the day and night, and then help you better gauge your overall health and wellbeing. For example, it could help give you early indications that you're coming down with a fever or other illness.

The advanced health features are the thing that really separates Fitbit's Sense from the also new Versa 3 ($229), which runs $100 less. Of course, Apple is gearing up to launch the Series 6 next month, which is expected to cost $400 and come with a dedicated sensor for blood oxygen monitoring that will likely be more appealing for endurance athletes. It's going to be interesting to see if the Sense's cheaper price will be able to persuade iPhone owners to switch over.

You can preorder the Sense and Versa 3 smartwatches on Fitbit's website right now, with them expected to ship by late September.