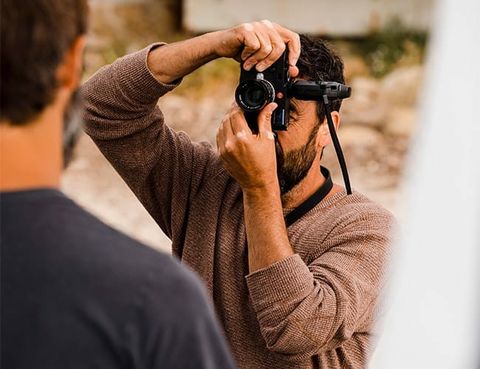 Born in Southern California and raised from what he calls “humble beginnings,” Tim Davis has built an enviable career as a photographer. First starting out in graphic design, an internship at Patagonia eventually led him to shift his focus behind the lens. Now, 13 years into his tenure as a staff photographer at Patagonia, Davis spends the chunk of his time in the field, shooting gear in action, with refreshing reprieves in the studio and editing deskside.

By nature, most of Davis’ work in the outdoor space has required him to be somewhat removed, an observer documenting as a photojournalist. But in his free time, Davis has been taken by the more intimate nature of portraiture. He’s studied the work of the masters of the craft, recreating classic set-ups and dialing-in studio lighting. His go-to has been the Leica M10, favoring its history, timeless craftsmanship and slender design. Davis took us along on some of his recent portrait shoots, behind the curtain at Patagonia’s creative studios and into his own home workshop to share more about this nuanced form of photography and how he approaches it. Read on for a look into his world.

On becoming a photographer:
“I’ve had an affinity for still photography since I was a kid. My uncle was a special effects photographer in the film days back in the ‘70s-’80s in New York City. I remember being 7- or 8-years-old and visiting his studio, being really impressed. My grandfather also owned a little camera store. My first camera was a little Kodak; I can’t even remember what it was called. It had discs of film and I would blast through them. By the time I was 16 or 17, my mom got me my first SLR, which was a Minolta with three lenses. It wasn’t a quality camera but I thought it was amazing.

Initially, in college, I was a fine art major. But I came from pretty humble beginnings so I had to figure out how to make a little money. I knew I wanted to do something in the arts. But I knew being a fine art major and making fine art was a really sketchy gamble. At first, getting into graphic design was amazing because you start making a little bit of money, but it was too much computer time. When I was at UCSB in the Graphic Design Department, I freelanced at Patagonia doing graphic design. While I was freelancing as a graphic designer, I switched [disciplines] and went to Brooks Institute of Photography back when it was located in Santa Barbara. Photography and filmmaking was a really neat way to see the world and be out and shooting amazing stuff. You do still get some technical stuff. You work really hard and then you get back in the office and have a more civilized environment with a cup of coffee at 8:30 in the morning and you get to process.”

On portraiture:
“The drawback to outdoor photojournalistic photography, at least for me, is that it’s a lonelier experience. You’re not involved, ideally, in the making of a photo. You’re just there to document it. That’s a neat experience, but the advantage to portraiture is that you’re involved in creating the photo. Portraiture is a lot more intimate in that sense. You get to work with the subject. If you look at the Henri Cartier-Bresson approach to it, he looked at the camera as a tool. In a way, it could encumber the process if you let it. It was about you and me and if I did my job right, I really captured the moment. It’s as simple as that.

When you’re taking someone’s portrait, it’s case by case. When working with a professional athlete or model, someone who has been photographed a lot, it’s a really easy process. They do what they do and I do what I do, and hopefully, we make something really great. If you get someone that’s nervous in front of the camera, the direction becomes more nuanced. You want to evoke the right look but you don’t want to make them feel more nervous. It’s a delicate balance. We have a finite limit to how long we can be photographed; I think a human can be photographed for maybe 8 minutes.”

There is something really special about a camera that’s been relatively unchanged for 100 years. These really teeny beautiful lenses are handmade and these camera bodies still look the same. There’s something tactile. They’re heavy. It’s handmade with brass and glass and someone is making each one.”

Leica took its expertise from more than 60 years since launching the M Series — 11 making digital M Cameras — to create the Leica M10. It is the slimmest digital M ever made with dimensions as slender as analogue M-Cameras. Combining heritage with technology, the slim and elegant camera uses a specially developed 24 MP, full-frame CMOS sensor and a Maestro II image processor, delivering extended dynamic range as well as ISO values up to 50,000. Learn More

On photographic legends:
“I have a slight obsession with black and white portrait photographers. We don’t use a ton of portraiture here [at Patagonia], even less black and white, so developing those ideas happens outside of work. Researching the old images and techniques of the legends (like Avedon, Newton, Elgort, Demarchelier, Lindberg and so on) is so rewarding: a Bob Marley portrait shot on auto with Kodak film bought at the local drug store; Avedon teasing his subjects or his 8×10 wooden camera with a white seamless taped to a barn; Bresson’s 50mm that he shot his entire career; Nachtwey’s focusing techniques and Tri-X film; Capa and Gerda Taro and love, war and death; Mark Seliger’s brick studio stairwell; Leibovitz and box studios. There is so much to learn: the techniques, the mistakes, the complexities, simple solutions, love of the medium and their subjects, the heartbreak, drugs, death, insecurities or regrets. It’s all so amazing and so human. I’m fascinated with the old legends and their lore.

Everything that’s happening in photography has been done and has maybe been done 100 years ago. It’s at least been done 50 years ago. We’re almost 70 years past when Richard Avedon was at his prime and Irving Penn was at his prime — and the fashion magazines on every shelf today are clearly influenced by these guys. I’m just trying to pay homage to the legends.” — Tim Davis, Senior Photographer, Patagonia

This content is created and maintained by a third party, and imported onto this page to help users provide their email addresses. You may be able to find more information about this and similar content at piano.io
Advertisement - Continue Reading Below
More From Cameras & Photography
How to Take a Cover-Worthy Picture of a Car
Presented by
Lexus
24 Great Vintage Cameras You Can Still Buy
Advertisement - Continue Reading Below
How to Edit a Photo on the Fly
The Best Compact Cameras to Buy in 2020
Olympus Is Done With Cameras
Dad Into Photography? Leica’s Black-and-White Digital Camera Is More Affordable Than Ever
This $50 Camera Changed My Photography Forever
The Olympus E-M1 III Is the Perfect Amount of Camera and Not an Ounce More
The Handy Camera Trick That Has Saved My Ass So Many Times
The Best Smart Home Cameras of 2020