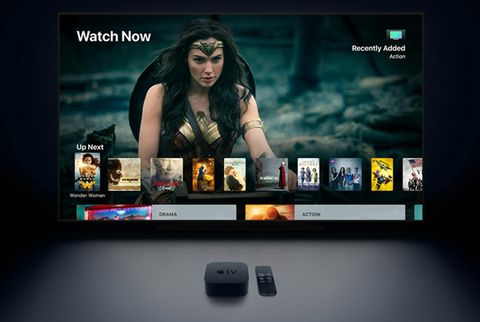 There are fewer reasons than ever to buy an Apple TV streaming box in 2019. That’s because Apple is integrating many Apple TV-esque features – HomeKit, AirPlay 2 and even iTunes – into some 2018 and most 2019 TVs made by LG, Sony, Vizio and Samsung. Even smart TVs that run on Roku and Amazon Fire TV platforms are getting some of these features. The reason is simple: Apple wants as many people to have access to Apple TV+, its all-new streaming service with original films and original shows (aka a competitor to Netflix, Hulu and Amazon Prime Video), which just launched this fall.

To watch Apple TV+ you need to have access to Apple’s TV app, which had previously only been available on Apple hardware: iPhone, iPad or Apple TV. (The Apple TV app is coming to Mac this fall.) Anybody without an Apple TV streaming box will not be able to watch Apple TV+’s shows and movies, which is why, as of this past spring, Apple has partnered with TV manufacturers to get the Apple TV app on other platforms. The Apple TV app is now available on all new Samsung smart TVs; and it should be available to most other platforms – Amazon Fire TV, LG, Roku, Sony and Vizio – before the end of 2019.

The Reasons to Still Buy an Apple TV

Similar to how services like Netflix allow you to switch between different profiles, offering individualized experiences split between different members of the household, so too will the Apple TV in a new feature rolling out this fall. For example, if you watch a lot of action movies, and your wife watches dramas, and your son or daughter watches cartoons – all those movie and TV show suggestions will not be muddled together. The Apple TV app that is built into other smart TVs will not offer this multi-user experience.

You Want to Play Apple Arcade on Your TV, Right?

Apple Arcade is the company’s new subscription gaming service which lets subscribers play original games and they will be playable across iPhone, iPad, Mac and Apple TV. If you have a smart TV that supports the Apple TV app, however, it will not support Apple Arcade. If you’re somebody who plans to subscribe to Apple’s new gaming service and you want to play games on your big-screen TV, you’re going to need an Apple TV streaming box.

The Apple TV Remote and a Superior Siri for Search

The Apple TV remote only comes and works with Apple TV streaming boxes, and it’s actually a very powerful navigation tool. Not only does it offer a super-easy way to scroll between thousands of Apple TV apps, as well as quickly get back to the Apple TV’s home screen, but it’s integrated with Siri so you can use your voice to quickly find content. Since the Apple TV streaming box is a completely “Apple experience,” Siri is actually a way more powerful tool.

A relatively minor feature of the Apple TV that has ardent fans is its screen savers. When your Apple TV is idle for a certain number of minutes, its display switches to a screen saver, typically featuring beautiful videos. To date, Aerial screen savers have been super popular; these Aerials have been shot from places all over the world and from space. If you like these screen savers enough, you can also tap “Menu” button on Apple TV remote while in the main screen and initiate these screensavers whenever you like. When Apple rolls out the fall update to TVOS, you’ll have access to new underwater screensavers that Apple made in partnership with BBC Natural History.

These Apple-specific screen savers are only available on Apple TV streaming boxes.

The Apple TV streaming box, HomePod smart speaker, and any iPad can be designated as smart home hubs for an Apple smart home. The advantage of this is it allows you to control your HomeKit smart devices remotely. For example, if you want to use your iPhone to issue a HomeKit command, either through the Home app or using Siri on your iPhone (like “shut the garage door” or “I’m close to home, get the AC running”), the Apple TV or the HomePod is the thing that receives the command and executes it within the house. Since the Apple TV and HomePod are both always on, it also allows you to run smart home automations; a good example is that through HomeKit, you can have your smart lights turn on at sunset. It’s true that there is now HomeKit on non-Apple smart TVs, but they are essentially acting as HomeKit accessories – not as a Home hub. It’s not always on and they won’t let you issue a command remotely; you can’t say “turn on my lights” when you’re at work, for example.

A Superior Processor (No Lag)

The truth is that even though more smart TVs will have more Apple TV-esque features, there’s a good chance that they won’t run like one. All Apple TV streaming boxes have dedicated processors that are designed to make things run as smoothly as possible. Smart TVs that are running Apple’s software have a lot more going on and, the reality is there might be more lag if you don’t have an Apple TV streaming box. It’s still worth trying the built-in option if your TV supports it, but you can always spend the $179 if you aren’t happy.

Yes, they are expensive, but the Apple TV streaming box (HD or 4K) are still arguably the best portable streamers that you can buy. Most people don’t think of them or use them as portable devices – it’s true – but the Apple TV is actually a great gadget to take on vacation or a work trip. It has 32GB or more or storage, which is room enough to a great number of apps or games. Or you can easily connect the Apple TV to Wi-Fi and stream any of your favorite shows or movies, across various apps.

Related article
Forget Every Other Soundbar And Just Buy This
This content is created and maintained by a third party, and imported onto this page to help users provide their email addresses. You may be able to find more information about this and similar content at piano.io
Advertisement - Continue Reading Below
More From News & Product Releases
Need a Watch Winder? This One Is Hugely Discounted
TAG Heuer's New Carrera Revamps a Classic Watch
Advertisement - Continue Reading Below
How Does Apple Fitness+ Stack Up to Competition?
Why a Pair of Patagonia Shorts Went Viral
Special Ops Members Helped Make These Gym Shorts
One of the Best Travel Mugs Just Got a Big Upgrade
Check Out Everlane's New Affordable Sneakers
This Japanese Brand Has a Fresh Take on Mattresses
Save on the Perfect Portable Fire Pit
Patagonia’s Camp Blanket Is Perfect for Home