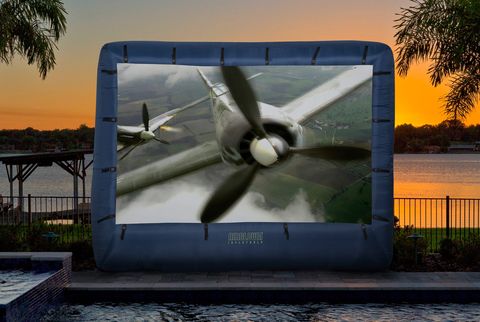 It’s summer, and if you’re looking for a project, transforming your backyard into an outdoor movie theater isn’t actually all that difficult. All you need are a few key components, such as a projector, speaker(s), a streaming device and an (optional) projector screen, depending on if you have a natural wall that can act as a screen or not. You don’t have to spend more than a few hundred bucks if you don’t want to.

Here are the essential components you need to build a DIY outdoor movie theater.

There are a number of factors you need to consider before buying a projector for a DIY outdoor movie theater. You’ll want to account for image quality, the image size it creates, and its connectivity options; you need to make sure it’s compatible with the media player or laptop you’re going to hook it up to. Since the outdoor home theater isn’t likely to be a permanent fixture in your backyard (because projectors aren’t weatherproof), you also want to make sure it’s small enough to move.

Released in 2018, the Sony MP-CD1 is a small, portable and easy-to-use projector. It has an HDMI connection and comes with an adapter, so you can easily use it with a laptop, smartphone or gaming console, and project a picture that’s up to 120 inches (which is huge). It has a built-in 5,000mAh battery that can last between two-and-three hours and has USB-A and USB-C ports for charging. It also has a 3.5mm jack to connect a separate speaker. On the downside, the Sony MP-CD1 doesn’t have built-in Wi-Fi, Bluetooth or an operating system, so you can’t play or watch anything without connecting it to a source. The picture is less than HD quality, which is about the same as other pico projectors.

The Nebula Mars II Pro is a significant upgrade over other pico projectors. It’s still very much portable, but its larger size enables it to have a bigger battery (that can last up to four hours on a single charge) and much-improved speakers. It has a neat autofocus feature so it’s really easy to set up. Maybe most importantly, it has an Android operating system so all you have to do is connect to Wi-Fi and you can stream content from Netflix, Hulu or YouTube; and yes, you can also download content directly to the Mars II Pro and watch it later without a Wi-Fi connection. It also has a 3.5mm jack to connect a separate speaker.

The BenQ HT2050A isn’t a portable projector like the two cheaper options on this list, meaning it requires a constant connection to power. But that’s basically it’s only downside. It’s able to produce a picture that’s significantly better (full 1080p) and brighter (up to 2,200 lumens), and it’s able to short throw a 100-inch picture from just a few feet away. Additionally, it has more connectivity options so you should have no issue connecting a separate streaming device, laptop or speaker system. (There’s built-in operating system so you need to connect to a separate media source.) Finding a place to mount it so that it will work for your outdoor setup may prove to be a challenge, though.

If you don’t have conveniently placed wall in your backyard — let’s be honest, most of us don’t — then you’re going to need to invest in a portable projection screen. They’re relatively affordable and can be set up pretty much anywhere. Plus, they reflect light without altering the projected image, meaning your movie theater is going to look great.

The TaoTronics Projector Screen is probably the best projection screen for most people. It’s rugged enough to leave outside, in case you don’t want break it down after every time you use it. It comes with a sturdy tripod and creates a big, 100-inch screen.

This is alternative take on the outdoor projector screen. Instead of relaying on a tripod or stand, the Gemmy Movie Screen is inflatable. It’s essentially like an air mattress, as you just plug it in and it self inflates (and stands!) within minutes. It creates a screen that’s more than 100-inches and will be a great partner for most portable projectors.

If you’re serious about an outdoor home theater, you’re going to want to buy separate speakers. Just like TVs and their small built-in speakers, projectors don’t sound the best. Fortunately, most projectors — including portable projectors — have a number of different connectivity options and can work with a variety of types of speakers.

Audioengine’s A2+ Wireless is one of the best sets of small powered speakers you can buy. They make great desktop speakers, or you can hook them up to an entry-level turntable that has a built-in phono preamp. The A2+ Wireless have built-in Bluetooth as well as a line-in connection, so they’ll work with any of the above projectors.

The Sonos Five is a newer and slightly upgraded version of the company’s now-antiquated Play:5. It’s a wireless speaker that needs a constant connection to power, and, because it has a line-in jack, it can connect to a projector and play audio without Wi-Fi. Additionally, it’s humidity-resistant, optimizing it for sultry summer nights (just don’t leave it outside over night).

It’s actually pretty easy to watch movies and shows on a projector — even small pico projectors — because you can connect directly to them via HDMI. A streaming portable streaming device, like a Roku or Amazon Fire stick, is nice because they don’t need a separate power source since they draw power directly from the projector; however, you want to make sure you either have a good Wi-Fi connection in your backyard, as most of those devices don’t allow downloads for offline viewing. Or you could just hook up your laptop or smartphone directly to the projector. The other option is to connect a device that can play physical media, like a DVD or Blu-ray player, but those options can be pretty arduous by comparison.

This little streaming stick brings Roku’s wildly popular smart operating system to your projector, plus all your favorite streaming services, such as Netflix, Hulu and Disney+. It supports HD and 4K streaming, although most projectors can’t stream in true 4K (and if they can, they’re usually expensive). It also comes with a remote, unlike some other affordable streaming sticks.

An Apple TV is an excellent streaming device for everybody locked into Apple’s ecosystem and it’s suprisingly portable (although it does need to be plugged into a separate power source besides the projector). If you have a higher-end projector that can handle 4K content, the Apple TV 4K is your best bet. Again, it doesn’t allow for downloads for offline viewing (only your smartphone, tablet or laptop can do that.