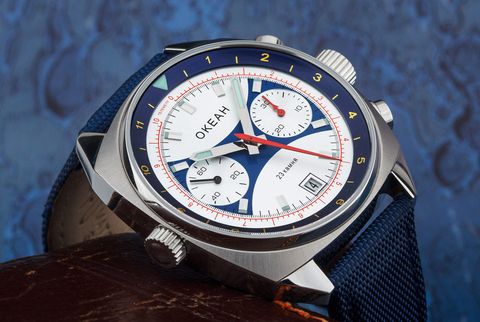 Not long after the Stock Market crash of 1929, Dueber-Hampden, a watchmaker based in Canton, Ohio, went bankrupt. Slow sales and the tumultuous financial state of the world no doubt played a factor. But according to some historians, the operation was using outdated technology while other watchmaking outfits in the U.S. were the envy of the world. In 1930, Dueber-Hampden’s tooling and equipment were loaded into boxcars. Their destination, along with 21 former Dueber-Hampden employees? Moscow.

This equipment and the know-how of these employees — along with additional gear from Ansonia Clock Company (another failed U.S. clockmaker) — would help form the basis of the First State Watch Factory, and subsequently the beginnings of the entire Russian watch industry, which would become one of the most successful in the world. Up to this point, watches in were in short supply in Russia and were either imported or cobbled together in small workshops from Swiss-made movements and parts. In either case, watches were not an of the people kind of good.

Within the next decade, Russia was producing hundreds of thousands of watches. Many were based on old Dueber-Hampden pocket watch designs, but the Russians eventually collaborated with watch companies abroad to further their development. For example, the Russian government set up a contract with French watchmaker Lip in the 1930s to collaborate on movement production — it lasted all the way until the 1950s, resulting in many high-end movements that Soviet watchmakers ended up improving on.

In fact, improving watches from outside lands, generally for reliability’s sake, seemed to be the Russian watch industry’s modus operandi, sometimes in an apparently illicit capacity. For example, as Swiss watchmaker Zenith’s chronometer-grade caliber 135 gained traction in the 1950s, the Russians sought to create their own hyper-accurate watch by copying the design. According to noted Russian watch collector Mark Gordon, it’s a mystery as to how it happened. “Nobody is quite sure what happened, but the Zenith caliber 135 blueprints ended up at the Tschistopolsky factory, where a modified version was then produced called the Volna,” he told the New York Times in 2007.

The Volna was not a direct copy. For starters, the small seconds hand of the Zenith caliber was swapped for a centrally-mounted hand, there were more jewels added and a larger balance wheel was utilized. Finishing was pretty much non-existent. And that gets to the crux of the matter: the watches of the USSR were almost never ostentatious, lacking in finishing or frivolous complications — they were first and foremost time-telling tools, built to be robust and reliable. After all, wouldn’t anything else just be an affront to the Soviet ideal of utilitarianism?

In fact, following WWII, Joseph Stalin was afraid of an influx of foreign watches. As explained in Charles L. Mee Jr.’s 1975 book, Meeting at Potsdam, “Millions of Russian soldiers had seen foreign lands, foreign wealth, foreign freedom. Thousands and thousands had traded everything they had with British and American soldiers for — wristwatches. Wristwatches, gold plated, silver plated, with seventeen-jewel movements: what unimaginable wealth they represented, and every single British and American soldier seemed to have one, and treat it casually, as though it were a mere convenience … [Stalin] did indeed fear that the Russian people would be infected by contact with the West, its wristwatches and its ideas.”

More flashy pieces did come into vogue. Commemorative wristwatches were common, such as the numerous watches celebrating the 1980 Summer Olympics held in Moscow, or watches made in honor of the Sputnik launch. Dials were often branded with logos and illustrations depicting military might or celebrating space or polar explorations by the USSR. Propaganda-dialed watches were even produced to promote political policies like Perestroika and Glasnost. Some were simply adorned with a hammer and sickle.

That’s just scratching at the surface, and even watches that didn’t feature branding or propaganda came in all sorts of different designs. That’s the thing about the Russian watch industry: it produced millions upon millions of watches. According to one expert, by the ’50s and ’60s its production was only outpaced by Switzerland. Given their ubiquity and their simplicity, and the general lack of interest by most collectors compared to European-made watches, they can be found easily and cheaply online.

As with a lot of low-priced, ubiquitous vintage watches, you need to be wary of Frankenstein’d timepieces or watches with shoddy, reprinted dials, as these tend to be particularly common with these timepieces. These tend to pop up on eBay and Etsy. Online sources, such as Mark Gordon’s extensive collection and watch forums like WatchUSeek, are vital in educating yourself on how to spot what’s correct and what isn’t, so that you’re paying the right price for a watch, be it original or not.

Still, from a historical standpoint, it’s worth it. Watches have always been a reflection of the time and place they were created in and that’s always been part of the draw of vintage watch collecting. But old Russian watches seem even more so to be fascinating artifacts of a tumultuous period in human history and the oppressive regime in which they were created, their dials and movements mirroring the progression of the Soviet Union’s history for decades, all the way up to its downfall in the 1990s. It may not be pretty, but history rarely is. It's worth remembering that.

5 Watches to Get You Started

This watch was made to celebrate the launch of Sputnik in 1957. It was a simple time-only watch with a small-seconds dial, but in place of a regular hand the watch has a disk with an illustration of Sputnik orbiting Earth that makes a full rotation every minute. An aperture makes up the main body of Sputnik and shows the running seconds time.

This chronograph was made primarily for the Soviet Navy during the ’70s and ’80s. It was one of the first watches to use the Poljot 3133, itself basically a reworked version of the Swiss-made Valjoux 7734.

This diver, originally created in the late ’60s, is as iconic a Russian watch as any. It utilized a case back with a threaded locking ring and a large rubber gasket, and, as water pressure continued to build on the watch, it would push the caseback in further, making it water resistant to 200 meters. The Ampbibia has been made in a variety of designs and can even be picked up brand new today for under $100.

This is the watch that carried the infamous Volna chronometer movement that copied (and in some respects) improved upon on the Zenith 135. A simple three-hand watch, it came in a variety of dial designs.

Raketa is best-known for making watches for Polar expeditions, explaining the ubiquity of 24-hour watches from the brand (these helped distinguish the specific hour in the prolonged presence of daylight on expeditions). The Polar comes in a variety of case designs and dial configurations, and can even be bought new from Raketa today.