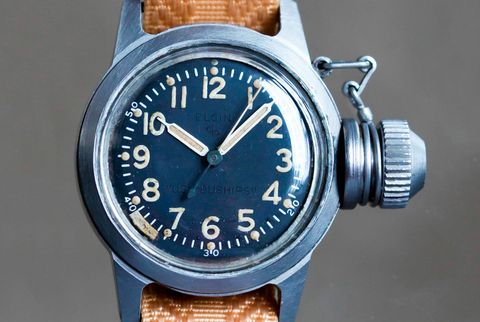 Welcome to Watches You Should Know, a biweekly column highlighting little-known watches with interesting backstories and unexpected influence. This week: the “canteen watch.”

Taken out of context, a “canteen watch” might look like a bizarre steampunk costume accessory or overzealous watch design gone wrong. It earned its name for obvious reasons: with a massively oversized crown cap linked to the case by a dangling chain, it looks like a miniature military water canteen. But why? As is the case with so many historical design curiosities, it was meant as an engineering solution for a pressing problem of its time, and it’s got a story to tell.

The problem was that, in the very analog early 1940s, navy divers needed reliable, water-resistant watches. Around the time the canteen watch first appeared, professional dive watches in the form we know them today were still a decade or so away (Panerai’s early Radiomir watches were a notable exception) — in other words, it predated tool-like characteristics like the rotating timing bezel familiar in modern dive watches (now typified by watches like the Rolex Submariner). To set the scene a little more broadly, the Aqua Lung self-contained underwater breathing apparatus (SCUBA) had just been invented — and World War II was raging.

Hamilton and other American companies like Elgin made a number of watches for military purposes during the war in addition to the canteen. Except for the crown and some other details, the canteen watches looked a lot like military field watches of the day. Made for the US Navy’s Bureau of Ships, some of the canteen watches had “USN BuShips” on the dial — leading to the terms “canteen” and “BuShips” being used interchangeably, though the same text can be found on watches that were not of the canteen’s shape or purpose.

Some canteen watches further had no text on the dials at all — so we’ll stick with the descriptive and intuitive “canteen watch” name. The prominent crowns of the canteen watches were part of achieving water-resistance suitable for critical activities like underwater demolition work in order to clear harbors of obstructions.

This was a time during the evolution of water-resistant watches in which companies were experimenting with a range of approaches. The Rolex Oyster had begun to pave the way as early as the 1920s, surviving a swim across the English Channel, but the water pressure faced by divers still presented a challenge. Omega’s solution with their Marine watch was to enclose the watch itself in an airtight external case, and this allowed it to actually complete some more serious dives and claim the title of “first dive watch.”

There are several spots on a watch that are vulnerable to water ingress, and the crown is especially problematic because it involves moving parts with which the user regularly interacts — especially considering these watches had to be wound manually. (The places at which the crystal and case back attach are the others.) The screw-down crown was a major innovation in water resistance that is still used in most dive watches today. The crown cap of the canteen watches did not prove to be an enduring solution but, most importantly, it worked for the task at hand. Interestingly, Cartier had pioneered a similar system even prior to the Omega Marine with the Cartier Pasha, though it was only intended for light pool swimming.

In addition to the canteen watch’s heavy duty crown cap, its crystal was soldered on to keep it as hermetically sealed as possible. Hamilton’s canteen watches are most well-known, and they featured the 987S caliber, the brand’s first wristwatch movement to use a central seconds hand — previous ones used a small sub-dial. They measure only 31mm in diameter, so that protuberance of a crown might balance out its wrist presence from a modern perspective.

Canteen watches were produced in pretty limited numbers for a short time, so while they were not common or technologically groundbreaking, they stand out for their story and their strange look. Modern companies that have a similar design as part of their brand personalities include TW Steel and Italian U Boat, and modern Hamilton’s own Khaki Navy Frogman watch seems to reference the canteen. Watch brands today can’t go wrong referencing military history, but the canteen-style case and crown cap make little practical sense for modern watches except to serve as a visually distinctive feature. Increased water-resistance is, of course, a bonus.