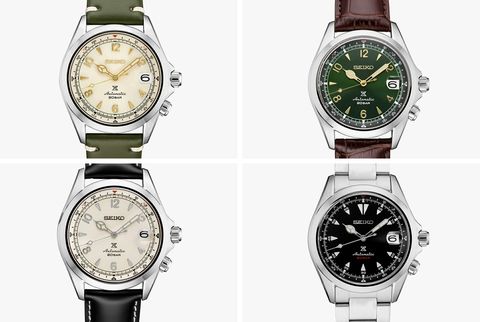 Though it’s often overshadowed by Seiko’s own divers, when the Seiko Alpinist was apparently discontinued, there was suddenly buzz around the classic sport watch. Vintage examples began trading for higher prices, and some limited editions were released and quickly sold out. Now, popular demand has been answered and the Alpinist is back and updated to fit coherently in the brand’s Prospex collection — and it’s brandishing some notable upgrades. Frankly, it looks damn good in each of its four current variants.

Many are attracted to the history associated with the Aplinist, introduced in 1959 for Japanese “mountain men,” and often considered the brand’s first sport watch. Along with the unique design and rugged specs, such as sapphire crystal and 200m of water-resistance, the restrained sizing of 39.5mm is also a welcome addition. The magnifying glass over the date, or “cyclops,” however, is always a controversial element in watch design. Another notable feature is the asymmetric crown at 4 o’clock, which controls a rotating inner bezel.

The new Seiko Alpinist comes in four different versions at launch with familiar color schemes, including an ever-popular iteration in green and a black-dial version with a steel bracelet, though the brand has held off on resurrecting the popular blue-dial version for now. All contain an upgraded Seiko 6R35 automatic movement that offers a very respectable 70 hours of power reserve.

Related article
The 200+ Best Holiday Gift Ideas for Men
This content is created and maintained by a third party, and imported onto this page to help users provide their email addresses. You may be able to find more information about this and similar content at piano.io
Advertisement - Continue Reading Below
More From News & Product Releases
This Affordable Seiko Dive Watch Is 41% Off Today
Enter to Win This Rare BMW and Help a Great Museum
Advertisement - Continue Reading Below
Keen Releases Jerry Garcia Masks, Sandals and Bags
Innovative Outdoor Tech Makes This Bong Awesome
Some of Tumi's Best Suitcases Are Now on Sale
This Vibrating Foam Roller Is Insanely Discounted
Western Boots That Won't Break the Bank
7 Google Chrome Settings To Change Right Now
Score Rad Winter Gear Before These Deals Melt Away
The Land Cruiser Could Get an Unlikely Competitor