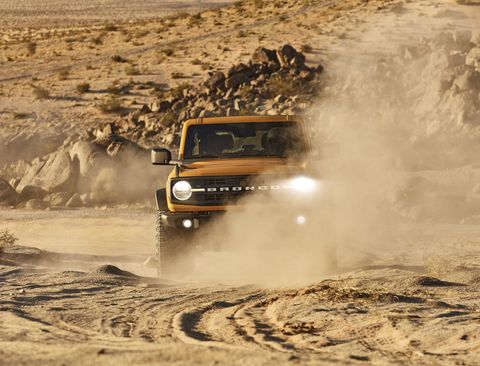 Unless you've been living under a rock, you're probably well aware that Ford just launched the new Bronco. The initial launch included three vehicles: two and four-door Bronco SUVs and a Bronco Sport crossover. Those, however, likely aren’t the only Broncos that Ford has planned. A new Automobile report offers details on what should be an exciting addition to the Bronco line: a Bronco pickup to take on the Jeep Gladiator and Toyota Tacoma.

According to Automobile, the Bronco pickup will share the same engine and transmission lineup as the current Bronco: a 2.3-liter turbocharged four-cylinder (paired with a 7-speed manual or 10-speed auto) and a 2.7-liter twin-turbo V6 (10-speed auto only). It should get the same off-roading tech, trims and Sasquatch Package.

Like the current Bronco, expect a limited First Edition version that will sell out before you can get your credit card out of your wallet. Unlike the Bronco SUV, the Bronco pickup will likely only be available as a four-door. Pricing, as with the Bronco SUV, should start around $30,000.

Unfortunately, it may take Ford a while to get a Bronco pickup to market. While Ford may try to get it to market sooner, the best bet is for the pickup version to arrive in mid-2024 as a 2025 model year vehicle.

In a vacuum, a Bronco pickup seems like a great idea, and a natural outgrowth from the current Bronco lineup. Ford should sell a lot of them, if they pull the trigger on the idea. But adding one is not as much of a no-brainer for Ford as the Bronco SUV.

One of the best decisions Ford made with the Bronco SUV is to offer the full-bore off-road-ready Sasquatch package on the base trim level. That undercuts the Wrangler where you have to upgrade to the top-tier Rubicon trim to do that. A Bronco truck could, in theory, play the same trick on the Gladiator. But that pickup could also potentially siphon sales from the likes of the Ranger and the F-150 Raptor.

That likely won’t keep Ford from trying a Bronco pickup; after all, overlapping crossovers seem to be enhancing lineups, rather than stealing each other’s sales. But it’s harder to make a bold play in a segment like trucks, which are Ford’s primary source of profits.

This content is created and maintained by a third party, and imported onto this page to help users provide their email addresses. You may be able to find more information about this and similar content at piano.io
Advertisement - Continue Reading Below
More From News & Product Releases
Need a Watch Winder? This One Is Hugely Discounted
TAG Heuer's New Carrera Revamps a Classic Watch
Advertisement - Continue Reading Below
How Does Apple Fitness+ Stack Up to Competition?
Why a Pair of Patagonia Shorts Went Viral
Special Ops Members Helped Make These Gym Shorts
One of the Best Travel Mugs Just Got a Big Upgrade
Check Out Everlane's New Affordable Sneakers
This Japanese Brand Has a Fresh Take on Mattresses
Save on the Perfect Portable Fire Pit
Patagonia’s Camp Blanket Is Perfect for Home