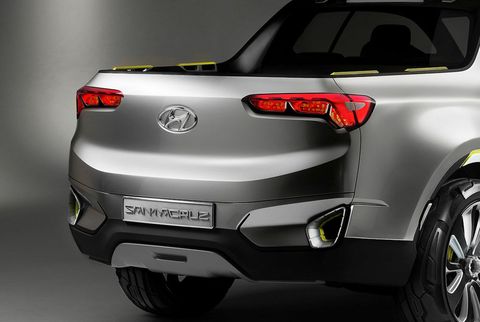 The next few years seem poised to be a delightful time for those of us Americans interested in smaller, more affordable pickup trucks. Ram seems poised to roll out a new Dakota to match wits with the Ford Ranger and Toyota Tacoma; Nissan is about to give the aging Frontier a new shot at relevance; and Ford is set to drop a tough-looking compact pickup on us as its entry-level model. But it’s not just established names in Truckworld diving into the kiddie pool: Hyundai is in the midst of launching their own small truck, the Santa Cruz — previewed by the concept vehicle of 2015 (pictured above).

And based on the image below, which appears to show a production-ready body for the Santa Cruz, we could see Hyundai’s cool new pickup truck on sale pretty darn soon.

The picture was sent in to the good folks at Motor1 via a reader who, for obvious reasons, seems inclined to remain anonymous. The biggest change from the concept is the presence of a second set of doors between driver and bed — a logical decision, considering that four-door pickups now make up the lion’s share of trucks rolling off dealer lots. The aggressively raked C-pillar of the concept is still there, though, now accented by sharper lines on the doors and hood. As it’s just a raw metal body, it doesn’t reveal the front end styling, but we don’t expect a grand departure from Hyundai’s current corporate SUV face.

If this body seems awfully complete and car-like for a pickup, well, there’s a reason for that. The Santa Cruz won’t be a burly, body-on-frame truck like the Ranger, Tacoma and Frontier; it’ll be a unibody vehicle, like the similar-looking-but-larger Honda Ridgeline. As such, Hyundai seems likely to target buyers looking less for the intense farm- and work site-ready capabilities of traditional trucks, and more for millennials who like their crossovers but wouldn’t mind having a big open-air space in back to throw mountain bikes and other outdoor equipment.

Hyundai announced late last year that the Santa Cruz would enter production in 2021, and be built at the same Alabama plant as the Elantra and Sonata. Given how complete this body looks, we’re hoping that timeline means it’ll be arriving closer to January 2021 than December of that year.

This content is created and maintained by a third party, and imported onto this page to help users provide their email addresses. You may be able to find more information about this and similar content at piano.io
Advertisement - Continue Reading Below
More From News & Product Releases
New Study Supports Protective Rep of Neck Gaiters
Finally, Filson Is Making Its Own Jeans
Advertisement - Continue Reading Below
Patagonia's Black Hole Has a Worthy New Competitor
This Awesome Limited-Edition Pack Is Back
Meet Segway's Cool Electric Moped (Yes, Moped)
What You Should Get from Uniqlo U's New Collection
10 of the Best Denim Jackets You Can Buy
Help Kids in Need: Enter to Win This Land Cruiser
Ford's Cool Electric SUV Just Became a Better Deal
Zero Motorcycles and Polaris Are Joining Forces