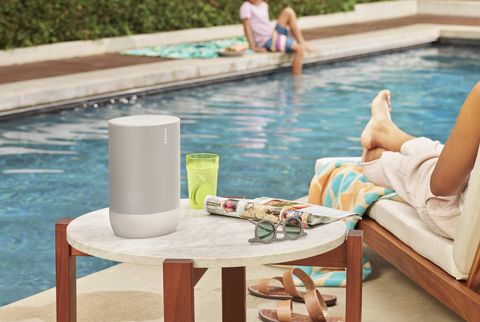 Sonos just announced that the Move, its first portable speaker, is getting an update that will improve its battery life by up to an hour. And as an added bonus, it also comes in a new colorway: lunar white. The new model is available for pre-order right now with shipping expected to start on June 30, and it costs $399 which is the exact same as the black model.

It’s not a huge surprise that Sonos has released the Move in a white colorway given that every other speaker and soundbar that the company makes is available in either black or white. What is surprising is how long Sonos took to do so, considering the Move was announced back in September 2019.

The likely reason for the delay is that, unlike all other Sonos speakers, the Move is coated with a special kind of paint to improve its sun and water resistance. Or perhaps, Sonos just wanted to make sure that the Move was actually successful in its more popular colorway, black.

In addition to the new color, Sonos also announced that it was able to squeeze out a little more battery life in all its Move speakers. Thanks to a recent software update, the Move is now able to get an extra hour of juice, pushing its previous 10-hour battery life to 11. So if you already have a Sonos Move, make sure you update it with the latest software patch.

If you’re looking for the best-sounding portable speaker you can buy, the Move is right up there. It’s the company’s first speaker with Automatic TruePlay, which allows the Move to automatically and on-the-fly adjust its EQ so that it sounds best for the space it is on, whether that’s inside or outside. It also has both built-in Wi-Fi and Bluetooth, so you can stream music directly to it via your smartphone or integrate the Move into your home’s larger multi-room system.

Related article
The Sonos Move Does It All, For Better and For Worse