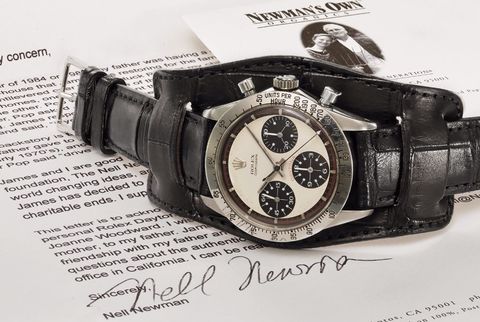 Just as buying a used or vintage watch can feel daunting, selling one can be equally difficult for enthusiasts looking to reshape or downsize their collections. Watch nerds are a persnickety bunch, which means your timepiece will likely face heavy scrutiny before it is purchased. Leaving out crucial info, half-assing your photos or just directing your listing to the wrong audience can mean it’s not sold at all, or, at the very best, that it goes for a fraction of its true value.

Eric Wind is a veritable expert when it comes to the buying and selling of watches — he’s a former watch specialist at Christie’s who helped pioneer the auction house’s online watch sales and now works as an independent watch dealer. We asked his advice on how to get the most money for a vintage timepiece. His tips may seem fairly straightforward, but it’s often the little things that sellers tend to miss.

There are several different avenues you can use to sell your watch, such as selling or consigning directly to dealers, consigning with auction houses or posting to online classifieds or forums. Not every one will work for every watch. “When I think through watches that I sold in the past purely as a collector versus having worked at Christie’s and now as a dealer, I think people need to think through each watch and which will be the best way to sell it,” Wind says.

Ideally, you should have a good idea of your watch’s value (viewing completed auctions for similar watches on eBay or at auction houses like Christie’s or Sotheby’s is helpful) and use that as a starting point. “For lower value watches, like $1,000 and under, it doesn’t make sense to list them at an auction house or anything like that. It’s easy to post them on ChronoTrader or throw it on eBay,” says Wind. But when watches are particularly rare or unique, that’s when going through an auction house is the better route because “there will be competition.”

For watches that are somewhere in the middle — valuable, but still relatively common — Wind suggests selling to or consigning with a dealer. The problem here is that in exchange for making a quick and easy sale, you’ll likely make less than what the watch is actually worth. If you want to make as much money as you can, setting up a listing on the most suitable enthusiast forum, like Rolex Forums, Omega Forums or WatchUSeek, or simply selling on a watch classified site like Chrono24 is the way to go. (Editor's Note: WatchRecon will aggregate many of the posts from these different forums, making for an easy way to scan through them all in one place.)

If you decide to put a listing up on a forum or eBay, your copy should primarily dictate the watch’s condition and be both comprehensive and simplified. “Presenting information in a clear and sort of bullet-point method might be an effective way compared to just writing several paragraphs,” Wind says. As for what to include, vital info would be “when you purchased it, where you purchased it, how many times you’ve worn it, if it has been serviced, how it’s running and if everything’s original or if anything has been replaced.”

Just like with a car, the value of your watch is greatly affected by the records — receipts, service history, boxes, etc. — that you keep. These are indicators of the authenticity and condition of your watch, and if you’re selling a newer watch, letting buyers know what you paid for it can give some people confidence that the price you want is a fair one. Wind recommends conveying you still have these records to buyers with photographs when setting up a listing. “Sometimes people miss that, and I’ve seen circumstances where people have listed a watch and not properly conveyed all the things it came with,” he says. “As a result, the price was not as high as it should’ve been.”

“I think the key thing, in any case, is that photography really sells it,” Wind says. Photographs best indicate condition, and while that may seem obvious, watches are notoriously difficult to photograph. “I see many people take photos in poor light conditions, where it's too bright and everything — especially if your watch has a sapphire crystal — looks very shiny, or where it’s way too dark, so you don’t see much. It’s also amazing how many people don’t know how to get an in-focus photo — these are very basic things, but not many people understand that.” Simply put, follow some of the best practices for shooting watches, and you’ll see a lot more interest from buyers with clear, well-lit pictures.

This content is created and maintained by a third party, and imported onto this page to help users provide their email addresses. You may be able to find more information about this and similar content at piano.io
Advertisement - Continue Reading Below
More From Watches
TAG Heuer's New Carrera Revamps a Classic Watch
10 Watches Prove Quartz Is Better Than You Think
Advertisement - Continue Reading Below
9 Superb Watch Winders for the Budding Collector
Two Of Our Favorite Affordable Watches Got Updates
You Can Rock Richard Dreyfuss's Watch from 'Jaws'
The Best Recent Watch Releases You Might've Missed
Save Up to $450 on a Grand Seiko Watch
Presented by
eBay
A Short Buying Guide to the New Apple Watch Bands
The Complete Buying Guide to Hamilton Watches
The Valjoux 7750 Chronograph Is a Timekeeping Icon