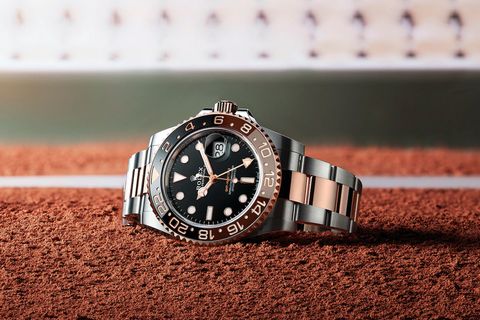 Welcome to Watches You Should Know, a biweekly column highlighting important or little-known watches with interesting backstories and unexpected influence. This week: the Rolex GMT Master.

Introduced at the dawn of the jet age, the Rolex GMT-Master has become an enduring symbol of a time when travel was both more glamorous and more adventurous. This most colorful of Rolexes, transcended its aviation beginnings and has been worn by astronauts, test pilots, a famous TV detective, a Bond girl and a sports car company chairman. Perhaps even more than its more famous sibling, the Submariner, the GMT-Master best represents what Rolex is known for – versatility and durability. And though the GMT-Master has been thoroughly updated and modernized in recent years, the old original still holds a more special place in the hearts of the Rolex faithful.

July, 1954. The Boeing 707 passenger jet makes its first flight and launches the jet age. Overnight (literally), well-heeled travelers are able to cross time zones in mere hours where it used to take days by the old steamship mode of transportation. The world’s largest international airline, Pan American, seized the opportunity and became Boeing’s first customer for the 707, ordering 20 of the new jets for transatlantic use. That same year, Rolex, at the request of Pan Am, released its new GMT-Master (reference 6542), a watch that could simultaneously track two time zones, an important function for long-haul pilots.

The early ‘50s were a watershed for Rolex. In 1953, the Oyster Perpetual was worn on the first expedition to the top of Everest and later that year, the world’s first purpose-built dive watch, the Submariner, debuted. A few years later, an engineer’s anti-magnetic watch, the Milgauss was introduced. The brand, which had pioneered the “waterproof” watch with its Oyster case and screw-down crown, now had found its stride and its niche – building durable watches for specific uses, what we now call “tool watches.” The GMT-Master was no exception and, unlike the Oyster Perpetual, the Submariner and the Milgauss, this one had a complication.

A complication is any watch function beyond tracking the time of day, since it necessitates engineering additional components for the watch’s movement. By this definition, even adding the date is a complication, and it's one that Rolex significantly innovated on in the 1940s with the DateJust. The GMT-Master, in addition to its automatically-changing date, adds a fourth hand to the dial, augmenting the hour, minute and seconds hand. This hand travels around the dial at half the speed of the hour hand; i.e., it takes 24 hours for it to make one revolution. While this complication is not particularly difficult from a watchmaking perspective (gearing down by half from the hour hand), Rolex was the first to make use of it.

The 24-hour hand on the GMT-Master is useful for tracking a second time zone only when used in conjunction with the watch’s most distinctive feature – the colorful rotating bezel. The large arrow at the end of the fourth hand points to a corresponding number on 24-hour bezel. This tells you the time on a military or 24-hour time scale when the bezel’s arrow is aligned with the 12 on the dial. While this alone would be useful for telling day or night in a perpetually dark environment like a cave or at the South Pole, where the lack of sun can become disorienting, it really becomes useful for tracking a second time zone. To do this, one rotates the bezel so that the numbers on the 24-hour scale correspond to a known other time zone, such as GMT, which is important for long-haul pilots and gives the watch its name.

The blue and red of the GMT-Master’s bezel are for more than a dash of color. They provide a quick, intuitive read of day versus night, with the 18 to 6 (6pm to 6am) region shaded blue and the daylight hours of 6 to 18 shaded red. Later versions of the GMT-Master could be bought with optional red and black bezel, and all-black bezels, but it was the so-called, “Pepsi” bezel that is the best known and most iconic. Collectors now often buy alternate color scheme bezels and swap them at will for variety, an easy task for anyone with a butter knife, some masking tape and a steady hand.

The GMT-Master enjoyed a long life in Rolex’s portfolio, evolving across decades of subtle changes, from dial markings, case and crystal materials, and finally, the movement itself. The most long-lived of the GMT-Master references was the 1675. Replacing the 6542 in 1959, it enjoyed a 21-year run until 1980, when the movement was changed to add a quickset date function. The 1675 was a favorite of Apollo astronaut, Jack Swigert, who wore it under his spacesuit on flights around the Moon on the fateful Apollo 13 mission and it has been speculated that Edgar Mitchell actually wore a 1675 during his Moonwalk on the Apollo 14 mission. Test pilot, Chuck Yeager has been seen wearing a GMT-Master for many years and Tom Selleck wore one for many seasons playing that ‘80s TV icon, Thomas Magnum.

Nowadays, the GMT-Master mostly enjoys a well-deserved retirement on the wrists of collectors. The reference 1675 is actually one of the most affordable of the desirable vintage Rolexes and, as such, makes it suitable daily wear piece due to its timeless design and durable Rolex build. In 2007, Rolex took the BaselWorld watch fair by storm by releasing a wholly redesigned GMT-Master II, which featured a larger case, a ceramic bezel and a sturdier bracelet. Technologically, it is a superior watch in every way to the old GMT-Master. But just like airplane travel isn’t like it used to be, the new watch somehow lacks the soul and panache of that old jet age pioneer, the GMT-Master.

This content is created and maintained by a third party, and imported onto this page to help users provide their email addresses. You may be able to find more information about this and similar content at piano.io
Advertisement - Continue Reading Below
More From Watches You Should Know
This Watch Was Made for a Special Tactical Unit
Icon: The Zenith El Primero Chronogtaph
Advertisement - Continue Reading Below
The Longines Lindbergh Hour Angle Watch
The First Bronze Watch Came From a Famous Designer
Seiko's Hybrid Technology Is Unique in Watchmaking
Is this the Most Capable Purpose-Built Watch Ever?
Watches You Should Know: the Grand Seiko Snowflake
This Innovative Sport Watch Is Ripe for a Comeback
What Makes the Cartier Tank the Quintessential Dress Watch?
This Military Watch Had a Critical Purpose in WW2