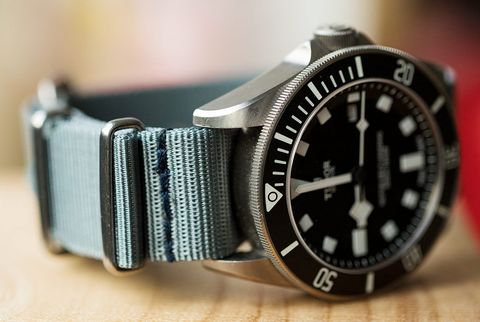 Whether or not you know exactly what a NATO strap is, you’ve definitely seen one. A trend item that has aggressively taken hold of the watch industry, NATOs can be found on just about any watch, from $35 Timexes to $7,000 Rolex Submariners to $50,000 Patek Philippes. Some watch enthusiasts may scoff at the idea of putting a $15 strap on an expensive timepiece, but NATOs are a fun, functional and quickly interchangeable way to show off your watch. While the straps have become fairly ubiquitous, their origin can be traced back to a single point in history.

The answer seems simple: the straps were originally made for NATO troops, right? Interestingly enough, the term “NATO strap” came into use as a shortened version of NATO Stocking Number (NSN), and otherwise has very little to do with the strap carrying its namesake. The more appropriate name for the “NATO” strap is actually the “G10” — which is how we’ll refer to it from here. In 1973, “Strap, Wrist Watch” made its debut in the British Ministry of Defence Standard (DefStan) 66-15. For soldiers to get their hands on one, they had to fill out a form known as the G1098, or G10 for short. Subsequently, they could retrieve the strap at their unit’s supply store of the same name.

Though DefStan’s name for the strap was decidedly nondescript, its specifications were distinct and specific. MoD-issued G10 straps were nylon, only made in “Admiralty Grey” with a width of 20mm, and had chrome-plated brass buckle and keepers. Another key trait was a second, shorter piece of nylon strap attached to the buckle. Since the strap was to be used by the military, it needed to be functional and fail-safe. The extra nylon had a keeper at its end through which the main part of the strap passed through after it had been looped behind the watch. This created a pocket, limiting the distance the case could move. As long as the strap was passed through properly and snugly on the wrist, the case would stay exactly where it was needed. The bonus feature of a strap that passes behind the watch is there so that in the event that a spring bar breaks or pops out, the case will still be secured by the other spring bar.

Since 1973, the G10 strap has seen only slight modification. The current version has been downsized to 18mm (this is due to the 18mm lugs found on the Cabot Watch Company’s military issue watch) and now has stainless steel hardware. In 1978, a company known as Phoenix took over production of MoD-spec G10 straps; those would be the “real deal” if one were looking for them today.

Not long after the simple “Admiralty Grey” G10 was issued, British military regiments began wearing straps honoring their respective regimental colors with stripes of all colors and combinations. One strap’s stripe pattern has become more famous than all the rest, but to call it a G10 or a NATO strap is actually a misnomer. When Sean Connery’s Bond famously wrist-checked his “Big Crown” reference 6538 Submariner in Goldfinger, he revealed an interestingly striped nylon strap. Aside from being too narrow, the strap was notable because of its navy blue color with red and green stripes. Many watch enthusiasts have labeled this strap as the “Bond NATO.” Despite the strap’s similarities to a G10, Goldfinger began filming in 1964, nine years before the first MoD G10 strap was issued. Timeline issues aside, it’s clear that the strap Connery wore had a very simple one-piece construction, not unlike that of a waist belt, and distinct from a true NATO.

Despite Bond’s trendsetting strap choice, it would be many years before the nylon strap industry would take hold. Like many other trends born from utilitarian military items (M65 Jackets, camouflage, etc.), early G10 strap adopters were attracted to the item’s usefulness and “tacti-cool” street cred. The usefulness is still intact, but now that there are literally hundreds of straps of different colors, stripes and materials sold by vendors around the world, the street cred has become more “faux” than ever. This shouldn’t stop you from wearing one, however. The straps are inexpensive, extremely durable, and can be switched out to fit whatever outfit or mood you’re in. In fact, most watch nerds probably have more G10s than they do watches.

G10s have been heavily trending upwards over the last several years or so. While it may be a fad that eventually fades, they don’t appear to be going away in the short term. Watchmakers like Tudor, Blancpain, Hamilton and Bremont have been either throwing in a G10 as an accessory to a watch purchase, or flat out offering one as the main strap option. The horology purist may scoff at such a thing, but watchmakers would be foolish not to ride the G10 wave; and while they come in varying degrees of quality, a good one is a trustworthy piece of equipment with a rich history.