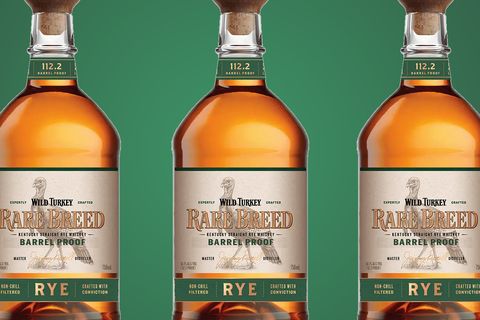 Every month, a huge amount of booze moves through the Gear Patrol offices — beer, wine and a whole lot of whiskey. This week: star-studded bourbon, a crushable IPA from Vermont and more.

Wild Turkey makes very, very good rye whiskey. Its Russel's Reserve 6-Year Rye is one of the best values on the shelf. But its rye lineup lacked a barrel proof option, and, available nationwide now, that void is filled by Rare Breed Rye. Rare Breed Rye joins Rare Breed Bourbon as its two barrel proof whiskeys. The rye is a blend of four-, six-, and eight-year-old non-chill filtered ryes bottled at a sturdy 112 proof. I love it because it drinks above its weight-class.

As Wild Turkey superfan and author of American Spirit: Wild Turkey Bourbon from Ripy to Russell David Jennings writes in his early review of the bottle, this is not a subtle whiskey. "While Rare Breed Rye may knock politely, the second you open the door it struts in, raids your fridge, grabs the remote, and props its muddy boots on your heirloom antique coffee table." Bottles are going for $60 – get one. — Will Price, Assistant Editor

Of the many, many, many newfangled canned boozes, this might be my favorite. Spiked seltzers are fine, but most of the cheap ones tend to be syrupy and harbor a gnarly aftertaste. Volley's tequila seltzers taste, well, real. The tequila is 100 percent agave spirit, which, thank god, is becoming more standard. It's not full of sugar, either, and cans don't exceed 110 calories. Plus, unlike most born-in-2020 canned drinks, it's not obscenely expensive — a reasonable $14 for a four-pack. I wouldn't say it's cheap, but if you Google its competition the relative affordability of $3.50 a can looks much better. The ginger-flavored cans are my favorite.

This 5 percent ABV wine barrel-aged version of Threes Brewing’s first-ever beer is an incredibly delicate Saison. I love the idea of Table Beer as a style (in the same vein as table wine). This version is wonderfully balanced between that typical musty, white wine character with some subtle tropical, fruity notes. The appearance is like a hazy white wine that has impeccable head retention. There’s absolutely no sugary aftertaste or adjuncts that some Saisons or wine barrel-aged beers can often have. Quite honestly, this may be a perfect beer and I can’t wait till Threes brews it again. — Ryan Brower, Commerce Editor

Lo-Cal IPAs were supposed to be the beer trend of 2020 — that is before open-sourced social justice beers became even more prominent and important. Firestone Walker’s Fly Jack packs big mouthfeel, decent hop character and a good body for a beer that has only 96 calories and 5 grams of carbs. And it doesn't necessarily come off as a Lo-Cal IPA either — Firestone Walker has done a very good job of hiding it as one by making it just as flavorful as a Hazy IPA. My favorite part about Flyjack (and Lo-Cal IPAs in general) is that it’s only 4 percent ABV, making it perfect for summer drinking. — Ryan Brower, Commerce Editor

Botanical-infused spirits usually conjure up ideas of gin. Los Angeles-based Amass brings the botanicals to vodka, and I'm reconsidering my ranking of clear spirits (sorry, gin!). Amass' wheat-based vodka is distilled in Copenhagen, and it's mixed with marigold petals, chamomile flowers and lemon zest. The vodka isn't as spiced-up as gin, but I found it lets the flavors of amaro and sweet vermouth in my negronis shine through. On its own, the vodka is smooth with soft, floral notes and a hint of citrus — kind of makes sense considering the ingredients. — Tyler Chin, Associate Staff Writer

Woo boy, this pét-nat tastes like summer in a bottle. A cheaper — and in my opinion a better — alternative to Champagne, this pét-nat wine undergoes fermentation in the bottle with the addition of native yeasts. Tank Garage's Super Geisha has a a creamy mouthfeel with a crap-ton of bubbles. It also uses two grapes I hadn't heard of before, Picpoul and Tocai Friulano, which is in line with Tank Garage's spirit of making one-off wine blends from rare grape varietals. The wine is pleasantly tart, sharply acidic and refreshingly citrusy, the best qualities from a summer wine. If you're out in Calistoga, California, and you drive past an old vintage gas station, that's where the winery is. Go ahead and grab a few bottles, because once they're out, they're gone for good.

This content is created and maintained by a third party, and imported onto this page to help users provide their email addresses. You may be able to find more information about this and similar content at piano.io
Advertisement - Continue Reading Below
More From Drinks
Why Whiskey Nerds Buy Rare Bourbon by the Barrel
Famed Whiskey Reviewer Accused of Sexism
Advertisement - Continue Reading Below
This App Guarantees You Won't Overpay for Bourbon
Looking for the Best Value Bourbon? Just Get This
This Bourbon Is A Mash-Up Made In Heaven
Presented by
Oak & Eden
The 18 Best Bourbon Whiskeys You Can Buy in 2020
5 Instagram Accounts to Get You Into Bourbon
I'd Drive to Kentucky for Four Roses' New Bourbon
Social Distancing Got Us to Buy Booze on the Web
Blanton's Whiskey Fans Are Having a Very Good Year