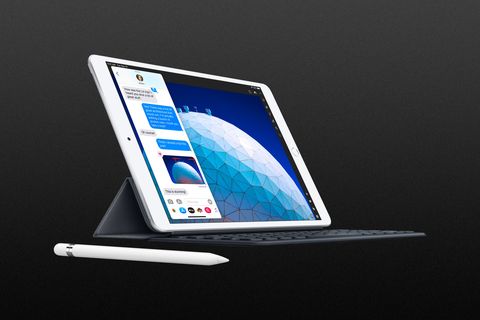 After discontinuing the iPad Air line completely in 2017, Apple revived it with the new iPad Air about a year-and a half ago, in early 2019. The new model had a bunch of additional features, like a Retina and True Tone display, a A12 Bionic processor (also found in 2018's iPhone XS), a Touch ID fingerprint sensor and stylus support for the Apple Pencil. Now it's late 2020 and fresh rumors are circulating that Apple is set to announce a new iPad Air this fall — dubbed the iPad Air 4 — and it could be a game changer.

If the rumors are true, the iPad Air 4 could have a big hardware redesign. The leaker DuanRui recently posted photos on Twitter that showed the iPad Air 4 with a near all-screen with very minimal bezels. More importantly, the new model would not have a dedicated Home button with Touch ID, but instead the Touch ID integrated into the power button at the top of the iPad. (Also, don't have expect the new iPad Air to have Face ID.) You can see the leaked photos below.

The other potential big upgrade is USB-C charging. The leaked photos of the iPad Air 4 suggested that it would have a USB-C charging port instead of a Lightning port. It is hard to imagine, however, given Apple's track record, that it'd add such a key upgrade to its mid-tier line of tablets. But if Apple chooses to give the iPad Air a USB-C port, enabling it charge faster and transfer data quicker — we're here for it.

If Apple is to announce a new iPad Air, another tech leaker, Jon Prosser, suggested it would happen the week of September 7, alongside the next generation Apple Watch.

We'll have to wait and see to find out for sure.

This content is created and maintained by a third party, and imported onto this page to help users provide their email addresses. You may be able to find more information about this and similar content at piano.io
Advertisement - Continue Reading Below
More From Tech
These Killer Desktop Speakers Are Finally in Stock
Save Over $200 on These Beautiful Wireless Earbuds
Advertisement - Continue Reading Below
The Most Popular Vintage Receivers and Amplifiers
What's a $300 USB Hub Actually Good For?
Modern Hi-Fi Is Leaving a Classic Component Behind
5 Great Bookshelf Speaker and Amplifier Pairings
Things You Should Already Be Doing With Your Phone
This New Electric Vehicle Is Shockingly Affordable
In Partnership with In Partnership with In Partnership with
Kandi America
Update Your AirPods Pro and Get Better Audio
Apple Watch Series 3 Vs Apple Watch SE