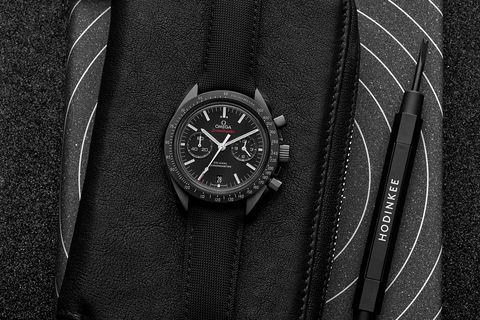 The Moonwatch, the Planet Ocean, the Ploprof, the 007 watch...The list of notable Omega watches could easily go on indefinitely. Any brand is lucky to have a single model considered a true icon, but but Omega is like few other watchmakers — with a wide range of compelling models that are packed with backstory and quality, they're truly a global juggernaut. Even better, many of the most attractive Omega watches are accessibly priced (compared to their competition) and the kind you'd want to actually wear every day.

The Omega catalog, however, can be overwhelming. There seems to be a different variation of the famous Speedmaster for every Tuesday of the year, for example. And then there are the various Omega watches that have graced the wrists of fictional super-spy James Bond. Well, allow us to give you a helping hand: Here are five stunners that provide some insight into the depth and breadth of the Omega catalog.

This is it: the Moonwatch, in its modern incarnation, but remarkably consistent with what astronauts famously wore to the moon in 1969. 42mm wide and powered by a hand-wound chronograph movement, it even features a historically accurate Hesalite crystal rather than the more modern choice of sapphire. There are many variations (including those with sapphire crystal), but in this configuration, on a leather strap, it's one of the most affordable ways to get into the Moonwatch game.

The brand's versatile, modern dive watch and one of its best sellers, the Seamaster Diver has long been the choice for the James Bond character, in one form or another. It's got a recognizable profile like that of no other modern dive watch, and recent updates and refinements have only made it better.

The Aqua Terra lives in the Seamaster line, so it has roots in nautical applications and a solid 150m of water resistance — but it stands out clearly among the collection otherwise populated by standard dive watches. The Aqua Terra is markedly more versatile and easily slipped under a cuff or worn with more formal attire. It's still got a sporty masculine edge, however, as well as the brand's famously solid build and tech, including the beautifully decorated and antimagnetic Master Co-Axial automatic movement visible through the case back.

Omega Speedmaster Moonwatch "Dark Side Of The Moon"

The classic Moonwatch proves the genius of its design by looking so damn good in so many different variations. The Dark Side of the Moon is a fully modern reinterpretation of the Speedmaster Professional in an all-black, 44mm ceramic case, with an automatic movement inside. It made a splash when Omega introduced it back in 2013 and it still looks killer and edgy today.

The Constellation might sit quietly in the shadow of Omega's sportier and grabbier options, but it's not one to be overlooked. Water-resistant to 100m despite its formal styling, its beautiful 8900 movement features an anti-magnetism rating of 15,000 Gauss and is visible via a display case back. This version has a fluted bezel and a blue "pie pan" dial à la those designed by the brand back in the 1950s.

What Are Flieger Watches, and Which Should I Buy?
24 Great Vintage Cameras You Can Still Buy
The 17 Best Sweatshirts for Men
The Best Face Masks From Outdoor Brands
The 18 Best Running Shoes Available Right Now
Best Hybrid Chronograph Watches
The Best Tote Bags To Buy This Summer