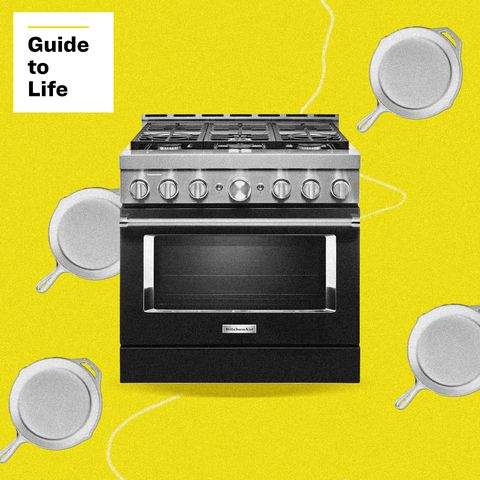 Going back to the middle of the 19th century, there was hardly any talk or reference to cast iron seasoning before cast-iron skillets made a triumphant return to the home cooking zeitgeist in the early aughts. The cookware wasn't much different – most skillets made before 1950 were cast or machined smooth, where the majority in use today are sold rough – but cooking culture was, thanks in large part to the internet.

Discussion forums, Youtube, Instagram and cooking blogs gave rise to a new cast iron mythology, where we fret over which oils are best for seasoning, what we need to keep pans in tip-top shape, the right way to clean them and all the mistakes people make using them.

What vexes cast-iron skillets users most in 2020? How to season the damn things. Taken as a whole, the internet's recommendation is to cover the pan in your chosen fat and bake it in the oven – usually around 400 degrees – for at least an hour per coat of seasoning. This method works. This method is also a time consumer. The fastest way to season a cast-iron skillet involves a stove, a skillet and opening your windows. Here's how to season a skillet in 15 minutes or less.

While we won't be lighting any fires in the house, we will be generating quite a bit of smoke. If you have windows in or nearby your kitchen, open them. If you have a vent exhaust over your stove, turn it on its highest setting. If there is a fan you could point toward the now-open window, set it up. While momentarily unplugging a smoke alarm is never recommended, you might consider it. This isn't meant to scare you off, but you should know there will be smoke in your home.

Step 2: Apply oil to skillet with a rag.

Get a rag from the garage or under the sink, dab it in your chosen oil and wipe around the cooking surface, sides and base of the skillet. The layer should reflect light slightly, but it shouldn't be glossy (glossy means you've applied too much oil). Then wipe the skillet down with a clean rag or paper towel to the point where the skillet is near-matte looking. If it's shiny at all when you start seasoning – using this process or the traditional oven method – the seasoning will be sticky and uneven in the end.

And now it begins. Your skillet will take 3 to 5 minutes to reach the smoking point temperature of the oil it's coated with, at which point wisps of smoke will appear. This is good! This is the oil breaking down and carbonizing into seasoning.

Step 4: Every few minutes, wipe the skillet with oily rag.

When the skillet starts looking bone dry, carefully give it a once-over with the same oily rag from the first seasoning layer. You can add as many layers of oil as you want, but two extra layers after the initial layer is plenty. Wear a heat-resistant glove, please.

Step 5: Turn the burner off, let the skillet cool.

All done. Sliding the dangerously hot skillet into a cold oven will help with the residual smoking and block someone from accidentally grabbing the handle. Whatever you do at this point, do not get it near the sink. If cold water comes in contact with a skillet this hot, there's a chance the temperature shock could cause the iron to sheer and splinter, which is a much bigger problem than an unseasoned cast-iron skillet.

This content is created and maintained by a third party, and imported onto this page to help users provide their email addresses. You may be able to find more information about this and similar content at piano.io
Advertisement - Continue Reading Below
More From Food & Drink
A Spicy Condiment to Make WFH Lunches Less Sad
Does It Matter If My Kitchen Knife Is Full Tang?
Advertisement - Continue Reading Below
This App Guarantees You Won't Overpay for Bourbon
A Portable Coffee Grinder for Apartments and Parks
Looking for the Best Value Bourbon? Just Get This
This Is How You Do a Kitchenware Collab Right
These Are the Only Coffee Makers You Should Buy
The 18 Best Bourbon Whiskeys You Can Buy in 2020
East Coast IPA vs West Coast IPA: What Gives?
The Everlane of Cookware Now Makes Tableware