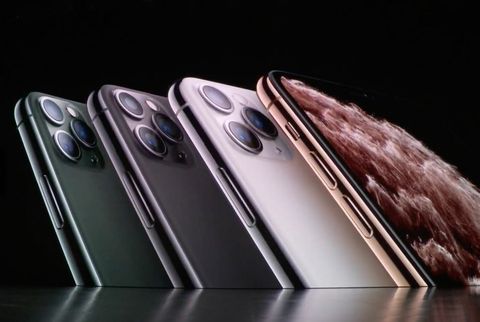 In the past few months, Apple has released a new affordable iPhone SE and new MacBook Pros with great keyboards, and at WWDC it gave us a glimpse of the overwhelming amount of new features coming to the iPhone, iPad, Mac and Apple Watch. But with that, our attention now turns to the fall and the announcement of Apple’s next-generation flagship smartphone, the iPhone 12. Here’s what we know (and think we know) about the next iPhone so far.

We already know that Samsung skipped nine generations of smartphones when it jumped from the Galaxy S11 to the Galaxy S20 in one year. It’s a clear play to sound better than all other new smartphones, but it’s unclear if Apple will attempt to shake up its naming scheme too. There’s little in the way of specific rumors on this topic, but given that Apple already took the plunge on numbers above ten with the iPhone 11, we’re guessing an iPhone 12 is likely.

There will be four different iPhones.

There will be two Pro and two affordable iPhones.

Of the four iPhone 12s, rumors indicate two will be premium Pro models and two be more affordable. Given that that iPhone 11 is the most popular and the cheapest new iPhone of the current generation, it makes sense for Apple to try to give its more price-sensitive and numerous customers more options. The theory goes that the large 6.7-inch iPhone and one of the 6.1-inch iPhones will be Pros, with better OLED displays and better camera systems. Meanwhile, the other 6.1-inch iPhone and the 5.4-inch iPhone will be the more baseline models with two-camera systems and LCD displays.

Apple is bringing back the squared edges.

It’s a little bit of a long shot, but there could be a big design change to all iPhone 12 models. Apple analyst Ming-Chi Kuo has reported that Apple might bring back the metal frame that was on the iPhone 4. This metal chassis would square off the edges of each new iPhone, like the iPhone 4, and make them a little easier to hold. As of April 2020, the Twitter account @EverythingApplePro appears to have uncovered a leaked CAD file of what is potentially the iPhone 12 with a squared chassis, adding full to this rumor:

Say hello to the iPhone 12 Pro Max (6.7-in). It's not often you get to leak an iPhone design. Huge shoutout to @MaxWinebach. Video going live in 15. pic.twitter.com/AcZMAj5X1Y

We’re getting a new camera.

With all the different iPhone 12 models expected to be announced, it’s difficult to say exactly how all of their camera systems will be different. For the flagship models, however, it’s been reported by Fast Company that they’ll have a 3D depth camera in their rear-camera systems for the first time. Apple has had depth a camera in its iPhone’s front-camera systems for a few years, enabling them to unlock via Face ID and to turn your face into an Animoji. In the rear camera system, a new depth camera is expected to add a few photo and video features/effects, such as better bokeh and focus, but you’ll see the majority of the benefits while using augmented reality apps. Apple is continuing to build out its catalog of AR apps (It’s been three years since Apple rolled out ARKit to developers.)

PetaPixel also recently reported that the two iPhone 12 Pro models will have an upgraded 64-megapixel sensor, which is a huge leap for Apple considering it’d mark the first time in years that Apple had gone away from the 12-megapixel sensor. Of course, a bigger sensor doesn’t always translate to better photos (at least when it applies to a smartphone), but it’s pretty exciting to think about an iPhone with a larger sensor.

Apple could kill the notch

Early indications are that the next-gen iPhones are expected to have a smaller TrueDepth camera system in the front. This will enable the notch to shrink down even further into the bezel. Whether the notch is just smaller or gone completely, that obviously remains to be seen.

2020 is primed to be a big year for the rollout of 5G but will the new iPhones support it? The answer is yes, or at least probably. The brand-new iPhone SE doesn’t support 5G, but that’s probably due to the fact that it’s in the body of an iPhone from 2017; plus, Apple likely wanted to keep its price down. Analysts suggest that it will. Not to mention that Samsung’s flagships do, and Apple certainly wouldn’t want to fall behind. That said, recent reports suggest that the coronavirus crisis could delay Apple’s 5G iPhone plans.

This year marked the first time that Apple shipped different iPhones with different wattage chargers; the iPhone 11 Pro shipped with 18-watt chargers with power delivery, with the iPhone 11 shipped with standard 5-watt chargers. With the expected four different iPhone 12 models, it seems that Apple will likely continue this trend, with the two Pro models getting the more powerful chargers straight out of the box. A well-known Twitter leaker of Apple news, an account named Mr White, recently posted that these new iPhones are coming with an even more powerful 20-watt charger. We’re guessing that these will just be for the iPhone 12 Pro models.

The release date will probably be pushed back.

If recent reports are true, Apple is expected to delay the release of all its new iPhones by at least a month due to the coronavirus pandemic. The company is still expected to hold its keynote event and announce all its new smartphones at the start of September, but they’ll likely start shipping sometime in mid-to-late October. These delays aren’t a huge surprise given that most of Apple’s iPhone manufacturing facilities are in Asia, an area hit particularly hard by the pandemic.

This content is created and maintained by a third party, and imported onto this page to help users provide their email addresses. You may be able to find more information about this and similar content at piano.io
Advertisement - Continue Reading Below
More From News & Product Releases
'Whisky Bible' Author Accused of Sexism
These New Nikes Make Every Runner Feel Elite
Advertisement - Continue Reading Below
Keen Releases Jerry Garcia Masks, Sandals and Bags
Did Ford Just Create the Best Cheap Pickup Truck?
Try to Win the Coolest Vintage SUV, Help Sick Kids
The Best Standing Desks for the Home or Office
Support Criminal Justice Reform and Win a Mercedes
Innovative Outdoor Tech Makes This Bong Awesome
Yup, This Is the New BMW M3
The 12 Best Jeans for Men