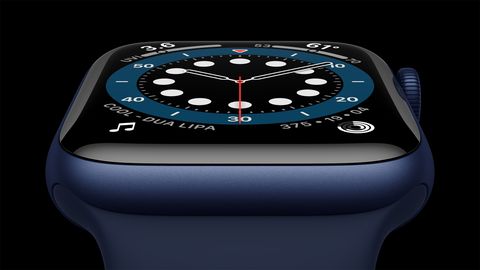 Apple's big September hardware event just concluded and no new iPhone was announced. Instead, it was an event dedicated to two product categories: the iPad and the Apple Watch. Here's what you need to know.

(Also, expect to hear more Apple hardware news in about one month — that's when the iPhone 12, in all its various incarnations, is expected to be announced.)

The Apple Watch Series 6 is the company's new flagship smartwatch. It looks almost identical to the Series 5 but packs a bunch of hardware updates, including brighter always-on display and a brand-new blood oxygen sensor. It also comes in several new colors, including graphite, blue, red and gold steel. The Apple Watch Series 6 will cost $399. It's available for pre-order today, with full availability coming this Friday (9/18).

Apple announced a new affordable smartwatch, the Apple Watch SE, that looks very identical to the Series 6. It has most of the same sensors as the Series 6, including its gyroscope, compass, altimeter and fall detection sensor. (There was no mention of a Sp02 sensor, however.) The SE will use an S5 chip, which Apple claims will help it run twice as fast as the Series 3. The Apple Watch SE will cost $279. It's available for pre-order today, with full availability coming this Friday (9/18).

The Series 3 lives on.

With the arrival of the Apple Watch SE, many suspected that Apple would kill off the now-three-year-old Series 3 — but that's didn't happen. Apple will continue to sell the Series 3 at the same price of $199, making it still the most budget-friendly Apple Watch that Apple sells.

Apple announced a new iPad Air and it has a pretty radical redesign. In fact, it looks very similar to the iPad Pro. It has a 10.9-inch Liquid Retina display with True Tone support and an anti-reflective coating. Gone are the think top, bottom and side bezels, as well as the Home button, that defined the previous iPad Air. Instead, TouchID has been integrated into the top power button (same as the iPad Pro). It has Apple's powerful A14 Bionic chip to help deliver a 40-percent boost in performance over the previous iPad Air. Also, like the iPad Pro, the new iPad Air is ditching the Lightning port in favor of the fast-charging power of USB-C. The new iPad Air will be available in five colors: silver, space gray, rose gold, green and sky blue. It will start at $599 and you'll be able to buy one next month (October).

Today, Apple announced Fitness Plus for virtual workouts to rival that of Peloton. There will be various types of virtual workouts, including cycling, treadmill running, yoga and HIIT workout. The Fitness Plus subscription will cost $10 per month or $80 per year. You'll get three months free with the purchase of an Apple Watch, and it'll be bundled into Apple's new Apple One subscription (more details here). Fitness Plus will go live later this year.

Apple One is the ultimate bundle subscription for Apple enthusiasts.

Apple One is the company's new subscription service that bundles together the company's growing suite of services into one bundle. The service comes in three tiers. There's an individual plan that costs $15/month and bundles Apple Music, Apple TV+, Apple Arcade and iCloud together. There's a family plan that supports up to five accounts for $20/month. Lastly, the premium subscription that costs $30/month and also includes a subscription to Apple News+ and the newly-launched Fitness Plus.

Apple isn't including the USB power adapters with its new Apple Watches.

That's right. In an effort to be more environmentally friendly, Apple is going to ship the newest Apple Watch models without the necessary wall adapter to charge them. You'll get the charging cable, but no wall adapter. The idea is that Apple is assuming most people already have like a zillion USB wall adapters at home, so this won't be a big deal. No doubt there will be some people who see this as a raw deal; the normal 5-watt adapter that comes with an Apple Watch costs $19, after all, but Apple isn't dropping the price of its Series 6 or SE.